F4 Academy: Another victory and title for Caio Collet

Caio Collet will not have to wait until the last event at Paul Ricard to celebrate his French Championship, his first title in single-seaters. By finishing the Spanish meeting with another victory, his seventh this season, the Brazilian has already secured the 2018 crown, succeeding Arthur Rougier. In Jerez, Frenchman Alessandro Ghiretti confirmed his talent by finishing 2nd ahead of Germany’s Esteban Muth, who completed his best weekend in F4. 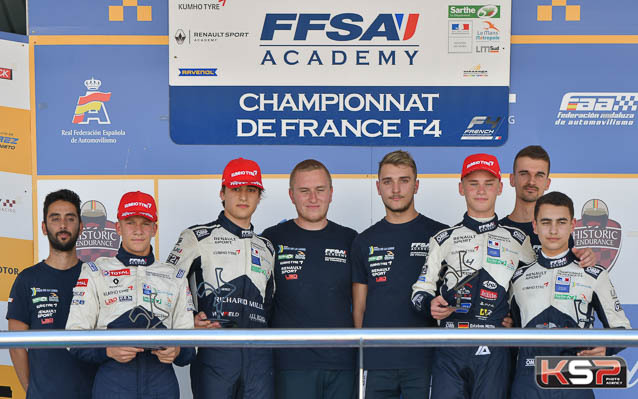 Winner of the Winfield Volant at the start of the season and under contract with Nicolas Todt’s company All Road Management, Caio Collet did not disappoint in 2018, after choosing the FFSA Academy and the FIA French F4 Championship for his first season in single-seaters. At Jerez, he took two victories, but on Sunday Race 3 had a particularly sweet taste, as it allowed him to win the French Championship.?

“Once again, the Qualifying session was important,” reported Caio. “Thanks to the two fastest times on Saturday morning, I was able to start in pole position for Races 1 and 3. Each time, I had a very good race start to quickly create a gap. Then, it was important to keep a fast pace, while preserving the tyres as much as possible.” As in Race 1, Caio Collet hammered his point home with the fastest lap.

Action from the start

Although the Brazilian was logically crowned at the end of the event, the last round scheduled for 12th to 14th October will not lack interest with several drivers vying for the final podium. At Jerez, Race 3 proved that they will not give any quarter, with many moves that animated the 12 laps of the race. First Arthur Leclerc got the better of Adam Eteki for 2nd place, while Reshad De Gerus lost out to Alessandro Ghiretti and Esteban Muth. For his part, Ugo De Wilde completed the first lap with a two-place gain, while Pierre-Louis Chovet went the other way.

The next laps saw Adam Eteki drop in the hierarchy: decidedly, a weekend to forget for the Ile-de-France driver! While Chovet began to recover the positions lost at the start, Ghiretti surprised Leclerc to emerge in 2nd position at the halfway point, but already far behind Collet.

Theo Pourchaire suddenly dropped back beyond 10th place and Leclerc was now under threat from Esteban Muth, who found the opening in the 10th lap. De Gerus, De Wilde, Chovet and De Pauw took advantage of this action to gain a place at the expense of Leclerc.

A final clash allowed Chovet to complete the top five in front of De Pauw, while De Wilde dropped two places. In front of them, the positions were frozen between Collet, the winner ahead of Ghiretti, Muth and De Gerus, the best of the Juniors. Following a “drive through” penalty (for exceeding the track limits), Theo Nouet lost 10th position, allowing Pourchaire to take 10th behind Leclerc and O’Neill Muth. What a race!