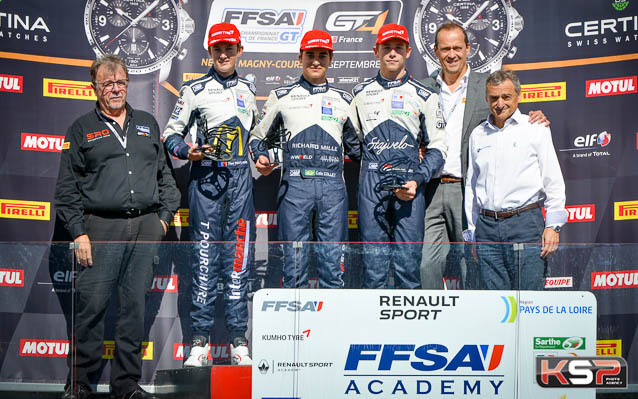 Caio Collet was the king of Magny-Cours on September 7th, 8th and 9th in the fifth round of the 2018 FIA F4 French Championship. The Brazilian confirmed his dominance in the race on Sunday, including a new lap record, and has taken a definite step towards the title. Behind Théo Pourchaire, a solid 2nd and once again the top Junior, the entertainment came from the chasing pack, with Arthur Leclerc in front and 3rd on the podium.

In the Nièvre, all of Caio Collet’s rivals had to admit it: the Brazilian was simply unbeatable. At each meeting, his talent develops further. In Race 3, he fully exploited his pole position to take the lead in the famous Estoril corner. Just behind, Théo Pouchaire got the better of Ugo De Wilde, who had to go wide and lose more than ten places in the action. Adam Eteki successfully managed to contain Arthur Leclerc.

Quickly, the safety car entered the track following Romain Boeckler’s crash. It pulled in after just two laps, leaving Caio Collet free to post the fastest lap. Despite all his efforts, Theo Pourchaire lost the slipstream of the Brazilian, while widening the gap on the pack thanks to a high level of performance.?A few seconds later, the fight intensified between Adam Eteki and Arthur Leclerc, under observation from Reshad de Gerus, definitely at ease at Magny-Cours.
?In the chasing group, O’Neill Muth, Matéo Herrero and Baptiste Moulin were more and more confident at this very high level, while Esteban Muth was trapped at the chicane and fell to 10th place.

Arthur Leclerc on the podium

The action continued in the FFSA Academy. Leclerc ended up finding the opening on Eteki for 3rd place. Further back, the Belgian De Wilde moved back quickly in the hierarchy after his misadventure of the first lap, imitated by his compatriot Ulysse De Pauw, who was forced to start from the last row following the penalty he received the day before.
At the forefront, the situation became clearer. Collet won this third race two seconds ahead of Pourchaire, the best of the Juniors. Despite Eteki’s determination to keep his place, Leclerc was on the podium for the second time this weekend. With the notable performances of Reshad De Gerus and O’Neill Muth, there was a total of three juniors in the top six. De Wilde and De Pauw finished their rise to 7th and 8th positions respectively, ahead Theo Nouet, finally spared problems.

In the provisional classification of the FIA French F4 Championship, Caio Collet now has a 50.5 point lead over Arthur Leclerc, who has got the better of De Pauw, Eteki and De Wilde. In Junior, it will be very difficult to prevent the brilliant Theo Pourchaire from being crowned.

The next meeting will be in Spain at Jerez on the 5th, 6th and 7th of October, a week before the final round at Paul Ricard.