Dalé gets the Bridgestone Super Cup in Lonato

Andrea Dalè on CRG won the Final and the Bridgestone Supercup trophy. In KF Junior the victory went to the Spaniard David Vidales (Energy), to Leonardo Marseglia (Evokart) in Mini Rok, as the latter was fourth in the Final. 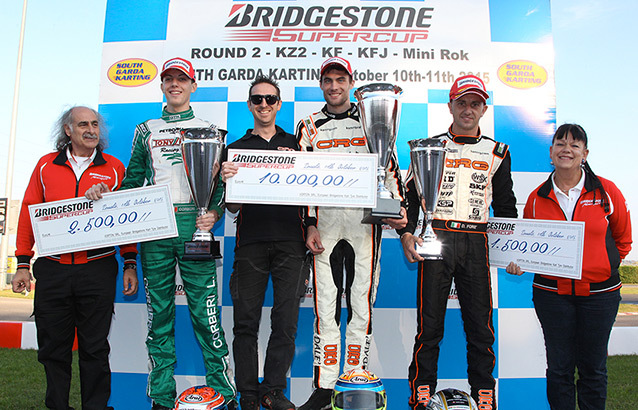 A high level event characterized the second and final round of the Bridgestone Supercup in a joint event with the South Garda Rok Trophy at the South Garda Karting of Lonato, the race that has been blessed with good weather and with 231 drivers on track out of the 243 entered.

The rich money prize of the Bridgestone Supercup helped to improve the level of this round, as a total of 40.000 Euros were distributed to the front runners of each category summing the points scored in this round to those harvested in the first race held early into the season in occasion of the Winter Cup.

KZ2. The most performing category, KZ2, was won by a super Andrea Dalè, on CRG-Tm. The European Champion of 2014 won the Prefinal and dominated the Final of the Bridgestone Supercup. Behind the driver from Brescia, who also won the Bridgestone Supercup absolute trophy, was the several times world champion Davide Forè, also on CRG-Tm run by team Renda, who found his place in the leading group after settling for P5 in the Prefinal.

The third place of the podium was obtained by another driver from Brescia, Luca Corberi, on Tony Kart-Vortex, after having problems at the start of the Prefinal and of the Final, managing to recoup in both occasions up to the second place in the Prefinal and the third in the Final. Giacomo Pollini, on CRG-Tm, was fourth at the flag after holding P2 early on, while the fifth place went to Lorenzo Lapina (Italcorse-Modena).

KF JUNIOR. The Spanish driver David Vidales (Energy-Tm) has been shining in KF Junior, winning Prefinal and Final, even if just quite in both occasions with Lorenzo Colombo (Tony Kart-Lke) second. The third step of the podium was obtained by the Slovakian Dominik Goldschmed on Energy-Tm. Vidales also won the absolute classification of the Bridgestone Supercup in this category.

MINI ROK. This category produced the most exciting races, as usually happens with the Mini Rok youngsters, as 103 drivers made it to the track in this event. After the 12 heats run on Saturday that decided the 30 finalists of the Prefinal and Final “A” and the 30 finalists of Final “B”, the victory went to the South African driver Saood Variawa, on Zanardi, who managed to pip to the flag the Greek driver Timotheos Dimitriou, on Tony Kart, as the latter has been leading the final laps. The third step of the podium went to a great Leonardo Caglioni, on Evokart, who has showed good progress once again. One of the main protagonists, Leonardo Marseglia on Evokart, ended fourth as he had to start the Final from the back due to a 5 seconds Penalty he was handed in the Prefinal where he has been among the quickest. Marseglia managed anyway to claim the victory in the final classification of the Brigestone Supercup. Mattia Michelotto, on Energy, took the victory in the Prefinal but then ended the Final in the back. The fifth place went to Federico Checchi (Tony Kart) ahead of Gabriele Minì (CRG). The seventh place went to the Swiss Leandro Anderruti (Gold) instead. Final “B” was won by Gustas Grinbeas (BirelArt).

The other categories of Rok Cup, Junior Rok, Rok, Super Rok and the Shifter Rok, have been competing for the South Garda Rok Trophy.

JUNIOR ROK. The Rok Junior has seen two qualifying heats to earn access to the Final. The winners of the two heats were respectively Alessandro Giardelli and Nicola Abrusci, both on Tony Kart, as the two drivers have also been the two main protagonists of the Final. Giardelli managed to have the best of his rival in the Final, as Abrusci ended second. The third place went to the Polish Michal Kasiborski who led the race early on under the “slow” regime due to an incident at the start.

ROK. In Rok, Ludovico Laurini won the Prefinal and managed to have the best of the Swiss Michael Muller in the Final. Both drivers on Tony Kart have been the main protagonists of the category. The third step of the podium in the Final was taken by the Polish Szymon Szyszko (Kosmic).

SUPER ROK. The Super Rok Final was dominated by Michele Imberti, after the victory scored by the Polish Josef Sticht in Prefinal, both on Tony Kart. Carlo Aldera lost the second place in the final lap and slipped down the pack. Sticht got the most of this situation ending second ahead of Danilo Albanese, on FA Kart.

SHIFTER ROK. Paolo Bonetti, on Tony Kart, missed out on the victory in the Shifter Rok Final. After winning the Prefinal and leading the closing stages of the Final until the penultimate lap, he was eventually forced to give up due to a technical problem. The victory in the Final went to Mattia Vita, also on Tony Kart, who led the race early on. The second place of the podium was obtained by Cristopher Zani, on DR, while P3 went to Gianmarco Ercoli, on PCR. Pierluigi Giglio, on CRG, put in a great comeback race ending fourth ahead of Leonardo Lorandi, on Tony Kart who, despite being at the debut in the shifter category, has been among the protagonists since the beginning.