With the return of the sun and milder weather conditions compared to Qualifying Practice, the 199 drivers entered in the Mondokart.com FIA Karting World Championship – OK and OK-Junior produced a magnificent show throughout the 43 Qualifying Heats. In each category, 72 drivers won their ticket for the Super Heats on Sunday morning, which will precede the long awaited Finals! Matheus Morgatto (BRA) in OK and Enzo Tarnvanichkul (THA) in OK-Junior are provisionally in first place, but the event is far from over. 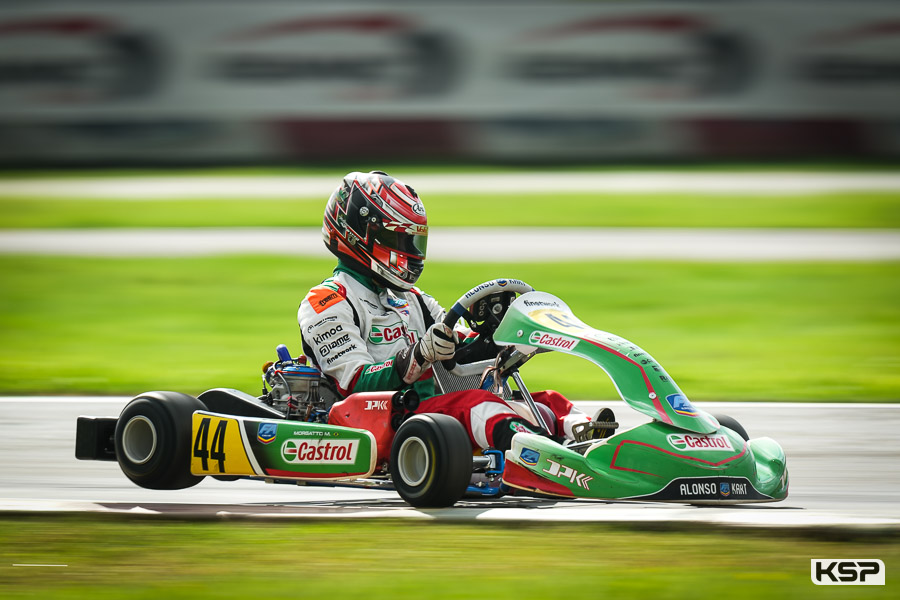 The Sarno circuit, which has been hosting the biggest international events for more than 20 years, was the scene of some intense battles. The OK and OK-Junior world class event has kept all its promises and it seems very difficult, at this stage of the competition, to predict the winners. Several parameters had to be taken into account by the drivers and teams in order to achieve consistent high performances, notably tyre wear. With a quota of six tyres to contest the Qualifying Practice, the Qualifying Heats and the Sunday Super Heats, a bad setting could very quickly have unfortunate consequences.

A number of incidents and penalties also had an influence on the rankings at the end of the day on Saturday. Only 72 drivers per category will have the opportunity to continue the adventure during the Super Heats, at the end of which the 36 finalists will be decided.

OK: 15 heats, 10 winners
Matheus Morgatto (BRA) made the most of his starts from the front row to win four times and take the lead after the Qualifying Heats. Only Arvid Lindblad (GBR) managed to get the better of the Brazilian, but the Red Bull driver was unable to win afterwards. Oscar Pedersen (SWE) and Tuukka Taponen (FIN), the reigning World Champion, were second and fourth respectively in the overall standings, with two wins. Yuanpu Cui (CHN) has been making steady progress since the start of the season and has now moved up to fourth place in the heat rankings.

25th in the timed practice on rain tyres, Kean Nakamura-Berta (JPN) was very fast in each of his heats and moved up to fifth place ahead of Zachary David (PHL), who won a heat on Saturday afternoon. Freddie Slater (GBR) also improved from 28th to tenth place behind Tomass Stolcermanis (LVA) and poleman Maxim Rehm (DEU), who had a tougher heat on his record. Alex Powell (JAM), Ruben Moya (ESP) and Maksim Orlov had the honour of each winning a Qualifying Heat. The rest of the competition will be difficult for Matheus Ferreira (BRA). His retirement in the last race on Friday evening dropped him to 18th position.

OK-Junior: Tarnvanichkul takes the lead
Physically and mentally, the young drivers aged between 12 and 14 experienced two tough days, with no less than seven Qualifying Heats to be contested by each of them. However, they had to make a clean sweep of finishes to be in the leading pack and several of them managed this feat. Enzo Tarnvanichkul (THA), who was 17th in Qualifying Practice, won five heats to top a field of 109 drivers. Tarnvanichkul is ahead of the top two drivers in the 2022 FIA Karting European Championship, Anatoly Khavalkin and Jan Przyrowski (POL). These two drivers have each won three heats.

Taym Saleh (DEU) showed consistency to reach fourth place, while poleman Kian Fardin (CHE) held his place in the leading pack perfectly. In fifth position, he was ahead of the two Hungarian drivers Martin Molnar and Adam Hideg. Zhenrui Chi (CHN) and Gerasim Skulanov, in eighth and tenth respectively, kept their places in the top 10, while Scott Lindblom (SWE) was ninth. Nathan Tye (GBR), Dries Van Langendonck (BEL), Maciej Gladysz (POL), Marcus Saeter (DNK), Noah Wolfe (GBR), Stepan Antonov, Clément Outran (FRA), Niklas Schaufler (AUT), Aleksandar Bogunovic (SVN) and Leo Nilsson (SWE) were all able to add at least one win to their scorecards in this top-level FIA Karting World Championship. With a gain of 74 places, Jules Caranta (FRA) is the driver who has made the greatest progress by reaching 34th position.

Provisional programme for the Sarno event

The Sarno event can be followed on the official FIA Karting Championship app for mobile devices and on the website www.fiakarting.com.