Last rehearsal before the European Championship

James Wharton’s 2021 season is about to get underway with the first round of the FIA Karting European Championship, which will take place on 14th-16th May in Belgium at the Genk circuit. The circuit was already full of life during the week of 2nd May with the start of the Champions of the Future series. The young Australian has experienced the ups and downs of the OK category, but knows that he has the potential to be a top performer with his Parolin Motorsport team as soon as the conditions are right. 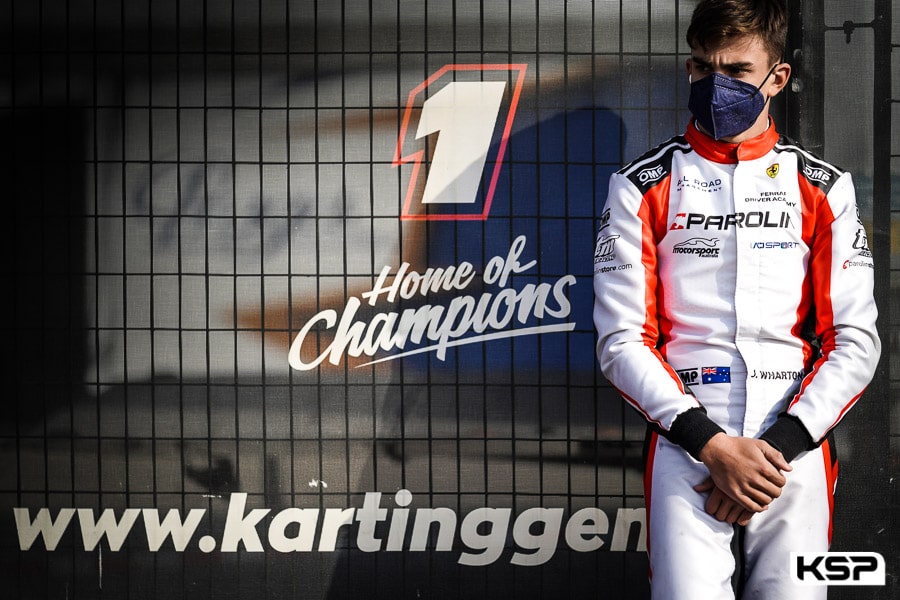 Known as the “Home of Champions”, the venue of Genk has again lived up to its name. The OK category had gathered a very high quality field with 69 drivers representing the most talented hopefuls of motor sport. The official Qualifying session was very important because it determines the starting grid for the Qualifying Heats, but it did not put James Wharton in the best of moods for the rest of the event. “As in the previous race in Italy, my kart is not effective enough when we put new tyres on it,” lamented the Australian. “It’s definitely something we need to keep working on for the European Championship, because it’s never easy to start a race when quite far back from the front rows.”

Fortunately, the Ferrari Driver Academy driver was not to remain in his initial 45th position for long. As he has been able to do on numerous occasions since the start of the season, James Wharton managed to gain places in all three of his Qualifying Heats, including two notable recoveries of eight and 13 places. In addition, the time gap with the drivers in the leading group was considerably reduced. On Saturday alone, he gained 19 places to come back to 26th when the heats had been completed.

Determinedly the young Australian did not stop there. “In the Prefinal, we made some excellent technical choices with the team, despite the track being quite slippery at that time of the day. I made a perfect start and tried to make up places on every lap. It was a really good race where I managed to move up from 26th to 10th place. All the efforts I had made since the beginning of the meeting were finally starting to pay off.”

Unfortunately, the improvement was short-lived. “I got into trouble on the first lap of the Final, stuck on the outside of the track and started to drop back in the pack. I was hoping to regain these lost places quickly, but no matter how hard I pushed, my kart lacked performance this time. My weekend ended with a disappointing 27th place. The important thing now is to take stock of this preparation race, to identify the positives and negatives, and to be able to improve everything that can be improved in a fortnight at the first of the four races of the OK European Championship. I am looking forward to coming back to Genk more motivated than ever.”

Very high performance on the adhesive track in Lonato

A race full of lessons learned