The hierarchy seemed well assured at the end of the Super Heats of the FIA Karting European Championship – OK and OK-Junior at Kristianstad. However, the Finals allowed Anatholy Khavalkin to win in OK-Junior while Alex Powell (JAM) won in OK. The provisional rankings for both Championships remain unchanged, but the conclusion will only be closer in a month’s time in Franciacorta (ITA). 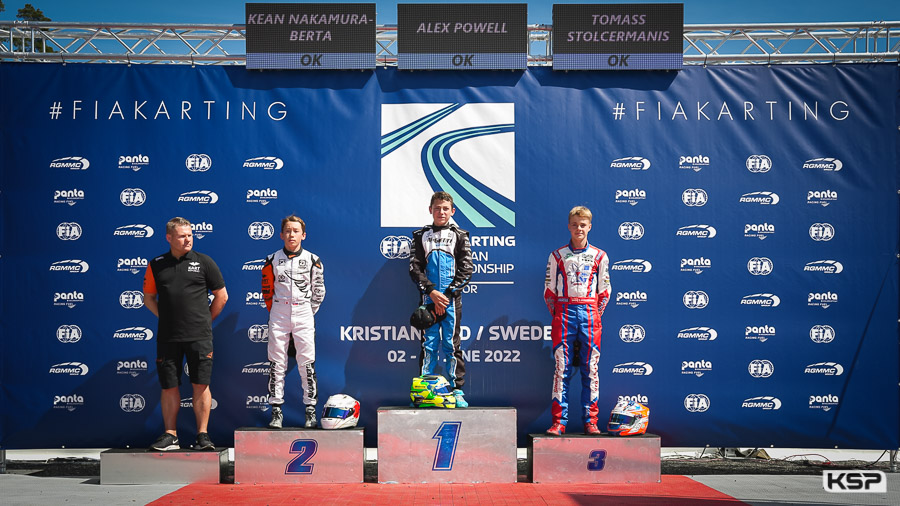 Sunday’s weather was even better than the day before, with a uniformly blue sky and temperatures approaching 25°. The races were demanding for the equipment while the drivers fought each other for hundredths of a second. The results of the Swedish event were somewhat different from the first two in Portugal and Spain. The more winding configuration of the Åsum Ring probably played a role in these variations, as did the constant work from the teams. In any case, the event was very strongly contested from start to finish in excellent sporting conditions, providing a great spectacle for the racing fans. Under the Scandinavian sun, the numerous spectators present enjoyed the entertainment of the Finals. CIK-FIA President Akbar Ebrahim was again present at this well-organised European event.

Following the results of this event, the battle for the titles will be more exciting than ever in a month’s time in Italy at the final round of the FIA Karting European Championship – OK and OK-Junior, which will take place from July 7th to 10th at the new Franciacorta circuit.

Powell the first Jamaican winner in OK
Kean Nakamura-Berta (GBR – KR/Iame/MG) had confirmed his status of favourite with another brilliant victory during the Super Heat A against Alex Powell (JAM – KR/Iame/MG) and the World Champion Tuukka Taponen (FIN – Tony Kart/Vortex/MG). Tomass Stolcermanis (LVA – Energy/TM Racing/MG) won in Super Heat B ahead of Olin Galli (BRA – CRG/Iame/MG) and Luka Sammalisto (FIN – KR/Iame/MG). Kean Nakamura-Berta was unsettled by a small exit from the track on the first lap of the Final and Powell took the lead on the following lap to never leave it. Maksim Orlov (Parolin/TM Racing/MG) was second until the ninth lap. Nakamura-Berta was back in second place, but Powell controlled the situation and kept his lead until the finish line, where he crossed the finish line 1,1” ahead of Nakamura-Berta. Stolcermanis took third position far ahead of Taponen and Orlov. Evan Giltaire (FRA – KR/Iame/MG) had to fight hard to reach sixth place in front of the leader of the provisional ranking Joe Turney (GBR – Tony Kart/Vortex/MG). Arvid Lindblad (GBR – KR/Iame/MG) finally progressed to eighth position followed by Galli and Juho Valtanen (FIN – Tony Kart/Vortex/MG). Enzo Deligny (FRA – Parolin/TM Racing/MG) could count on a gain of 10 places to 11th position to stay well placed in the Championship while Ean Eyckmans (BEL – Tony Kart/Vortex/MG) finished a complicated weekend in 25th position.

The results of the Kristianstad event can be found on the official FIA Karting Championship app for mobile devices and on the website www.fiakarting.com.