Accustomed to the podium this season, Isack Hadjar finally took his first victory in 2020. Starting from pole position in Race 1 on the Paul Ricard circuit, the young Frenchman didn’t give anything away and resisted the strong pressure of Japanese driver Ayumu Iwasa. 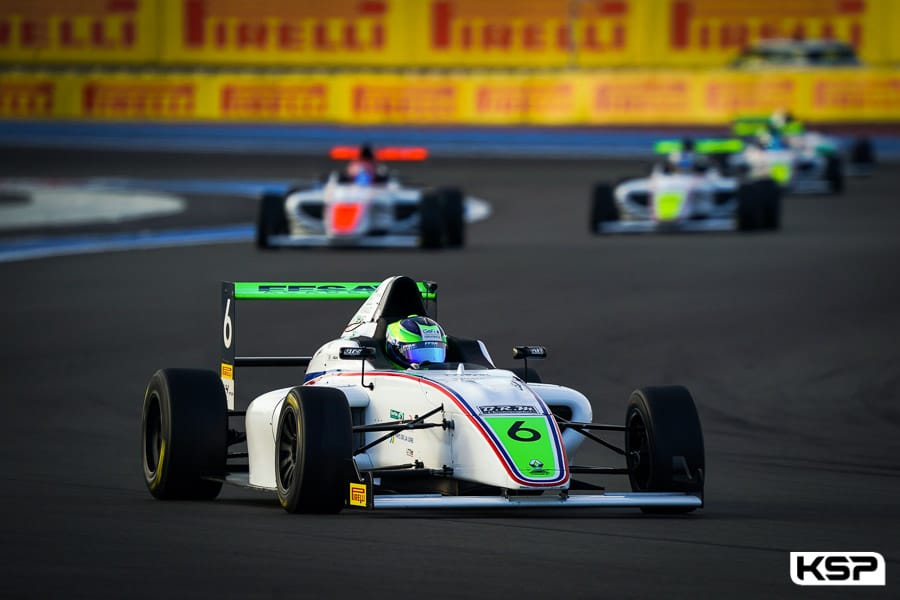 As the meeting scheduled for Le Mans on 13th, 14th and 15th November could not be organised due to the pandemic, the GT World Challenge hosts the sixth meeting of the FFSA Academy’s French F4 Championship. From the first free practice session, Japan’s Ayumu Iwasa, Germany’s Valentino Catalano and Isack Hadjar marked their territory by setting the three fastest times.

These drivers were logically at the front of the field during the qualifying session on a dry track. This time, Hadjar was the fastest with a superb lap time of 2’07″418. Iwasa was less than a tenth of a second behind, which shows the intense duel between the two drivers. Romain Leroux increased his speed during the session and took third place. Sami Meguetounif beat Japanese driver Ren Sato by three thousandths of a second to gain fourth place on the grid for Race 1. Catalano wasn’t able to repeat his performance of the free practice sessions, so the leader of the Junior classification had to be satisfied with 6th in front of Owen Tangavelou, who was definitely getting faster and faster.

The classification of the drivers’ 2nd fastest laps, used to define the starting grid of Race 3 on Sunday morning, was similar for the top eight, with Hadjar again in front of Iwasa, Leroux, Meguetounif, Sato, Catalano, Tangavelou and Kremers.

Isack Hadjar from start to finish

Although a few damp patches persisted, mainly in sector 1, after a little bit of drizzle in the afternoon, Hadjar made the best start in Race 1, immediately followed by Iwasa and Meguetounif, who had a good start. Catalano also made a very good start, whereas Leroux lost some valuable positions. Loris Cabirou wasn’t able to set any time at all in the qualifying session because of a collision with Ukrainian driver Ivan Peklin, who was penalised for this incident, and so he had a thunderous start. But once again, he was dropped by the Russian Lev Lomko and had to retire, with a damaged rear tyre.

Disappointed with his 8th place in qualifying, Dutch driver Marijn Kremers chased down his opponents, while Owen Tangavelou also showed himself to be very convincing from the beginning of the race. At the top of the hierarchy, Hadjar kept up a strong rhythm. Around mid-race, Sami Meguetounif was caught out by the track, which was still slippery in places, and had to chase with a damaged wing. He dropped to 8th at the wheel of a car that had lost its efficiency. Catalano recovered 3rd place, while keeping an eye on Japanese driver Ren Sato in his rear-view mirrors. They were to keep these positions until the chequered flag was lowered.

After a clear round, Hadjar triumphed ahead of Championship leader Iwasa. A brilliant 5th, Tangavelou took his best result of the season. Kremers finished his comeback in 6th position ahead of Leroux. At the very end of the race, Ivan Peklin surprised Daniel Ligier to take 9th place. These two drivers will share the front row of Race 2 on Saturday morning, according to the principle of the inverted grid for the first 10, with Ligier on pole.