Australian driver Hugh Barter scored his eighth win of the season in Race 1 and made a superb comeback from 9th to 2nd place in Race 2 which was won by Pierre-Alexandre Provost, who overcame his curse at Lédenon! 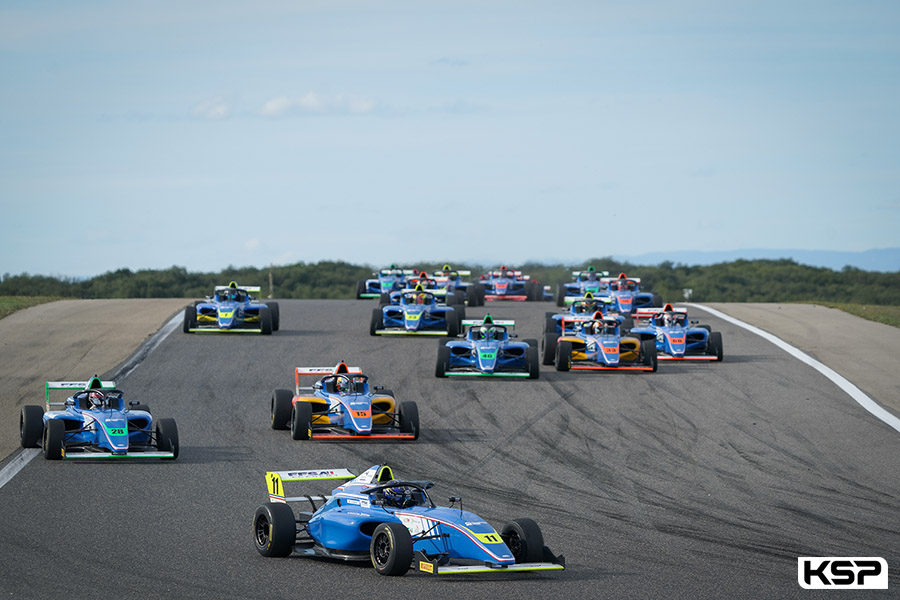 The sun shone throughout Saturday and the temperature also rose under the helmets of the 22 drivers racing at Lédenon for the fifth of the seven races of the French F4 Championship, which gave rise to two very lively races on Saturday 10th September. The 3150 metres of the hilly Lédenon track once again lent itself perfectly to the performance of the single-seaters meticulously prepared by the FFSA Academy.

Race 1: Another success for Hugh Barter

Hugh Barter jumped at the chance to take the lead in Race 1 from the very first corners, after being outpaced by Alessandro Giusti in the Qualifying session. “I was surprised to see Souta Arao get such a good start from 5th,” commented Barter. “He put pressure on Alessandro and I saw the opportunity to pass them both, which worked! After that I had a great pace and was able to keep the chasers behind me. The Championship is far from over and it’s important to score as many points as possible.” Shortly after the lights went out, things didn’t go so well for second row drivers Edgar Pierre and Enzo Peugeot, who crashed to 14th and 8th respectively.

Elliott Vayron was quicker than Dario Cabanelas at the start and was 4th, a position he kept for the rest of the race behind the trio composed of Australia’s Barter, Frenchman Giusti and Japan’s Arao. In the pack, there were intense duels. Pierre-Alexandre Provost, Jeronimo Berrio and Romain Andriolo were forced to retire from the race, while Enzo Peugeot was given a 30 second penalty when he came back to 6th position at the chequered flag. Swiss driver Dario Cabanelas dropped three places to 8th after his neck-and-neck battle with Japanese driver Yuto Nomura, who was eventually placed 5th. Enzo Geraci, who started 14th, made a superb progression to 6th place ahead of Germany’s Max Reis. But the best comeback was made by Leny Réveillère, 20th on the grid and 10th in Race 1 behind Edgar Pierre.

Race 2: Provost back on top

Race 2 was run in the reverse order of the Qualifying session for the top 10 and saw Germany’s Max Reis take pole position. But he was overtaken by Pierre-Alexandre Provost. “I really concentrated on getting off to a good start, I really wanted to be able to take the lead straight away and give everything I had in the first few laps to open up a gap.” Although his battle plan worked perfectly, a collision between three drivers two laps later forced the race director to send the safety car on track.

The field regrouped and overtaking was on the increase, especially for the talented Barter, who even came back to within a second of the winner. “Yes, I saw Hugh coming back in my mirrors, but I controlled the situation until the end,” added Pierre-Alexandre. “I’ve often been unsuccessful since the beginning of the year and I really wanted to win again in F4.”

Forced to retire after contact with Souta Arao, who would be penalised, Max Reis could not take part in the fight for the podium, where we saw Elliott Vayron on the third step after a fine attacking race. After a good comeback from 10th place, Alessandro Giusti passed Yuto Nomura for 4th place. Enzo Peugeot had a steady race in 6th position, while Belgian Lorens Lecertua and Swiss Dario Cabanelas took the last points in this Race 2. Edgar Pierre was unlucky and had to retire again.