Winner of the Richard Mille Young Talent Academy this winter, Australian driver Hugh Barter held off Macéo Capietto to win Race 3 at Nogaro, while Esteban Masson made an incredible comeback from last to 3rd place. 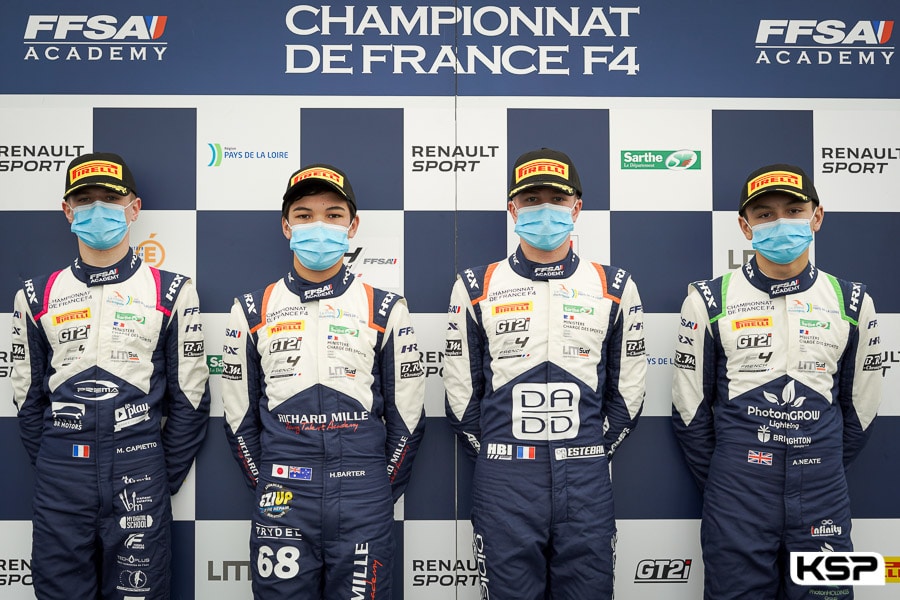 The 2021 French F4 Championship is off to a flying start and promises to be an intense and interesting season, as Race 3 on Easter Monday perfectly illustrated. The battle was fierce at all levels of the field. It has to be said that the first lap saw a few twists and turns. Poleman Esteban Masson stalled on the starting grid and started in last position, while Hugh Barter took the lead at the first corner. Daniel Ligier was caught between Macéo Capietto and Owen Tangavelou, but he touched the latter and damaged his front wing and had to give up. Tangavelou had a punctured rear tyre and was forced to retire with many regrets.

Masson puts on a show

Capietto was happy to have escaped the incident at the start and immediately followed Barter, both drivers creating a big gap on the chasing pack led by British driver Aiden Neate, a particularly promising Junior. Just behind them, an exciting head-to-head battle started between Gaël Julien, Thanapongpan Sutumno and Pierre-Alexandre Provost. During this time, Esteban Masson started a crazy climb. The winner of Race 1 was already 8th on the third lap.

At the front, Capietto came up against the leader. “With the aerodynamic turbulence, it was difficult for me to get close enough to Hugh to attack.”

The Australian certainly didn’t have it easy. “It was quite stressful, Macéo put a lot of pressure on me, I really tried to stay focused to avoid making a mistake. It was quite a relief to pass under the chequered flag as a winner. It gives me valuable points and I’m already 2nd in the Championship, which is positive after my first race in a single-seater.”

“After my retirement from Race 1, it was important to get a podium finish this weekend. My next objective will be to have a very good Qualifying in the next race,” commented Macéo.

Although the positions ended up being fixed in the first two places, Esteban Masson continued his advance. He dispatched Provost, Sutumno and Julien, and then attacked Neate, whom he overtook inexorably. This third step of the podium, conquered by his own efforts, allows Masson to leave Nogaro with the lead in the Championship. “Another victory was within my grasp, it’s a shame to have missed this start. In the end, however, there are many positives to take from this first meeting of the season.”

4th at the finish, Aiden Neate again scored significant points, as well as taking another Junior win. The British driver was able to keep Gaël Julien behind him, although he was very consistent and efficient. 2nd Junior and 6th in this race in front of Sutumno, the Swiss driver Dario Cabanelas showed excellent potential in Nogaro.

A final incident occurred in the last lap, with contact between Pierre-Alexandre Provost, unfortunately eliminated in the adventure, and Alessandro Giusti, who recovered 8th place in front of the Pole Adam Szydlowski, in the top 10 for the first time of the weekend. Noah Andy took 10th place despite pressure from the young Enzo Geraci, who grew stronger during the meeting. Further back, Indian Vignesh Kadarabad won his duel with Angelina Favario.

While the next round at Magny-Cours is already on everyone’s mind, the FFSA Academy can draw an extremely positive conclusion from the launch of the new season. Future podiums, victories and titles promise to be coveted!