The changing skies at Le Mans contributed to several unexpected developments in the Qualifying Heats of the Mondokart.com FIA Karting event currently taking place in the Sarthe region of France. A succession of brief showers on Saturday morning did not help all of the competitors. However, the verdict is in. Simo Puhakka (FIN) took the lead in KZ. Arthur Carbonnel (FRA) took the top position in KZ2. Jeroen Bos (NLD) remained the leader of the KZ2 Masters, while Mark Dubnitski (EST) took the lead in the FIA Karting Academy Trophy at the last moment. 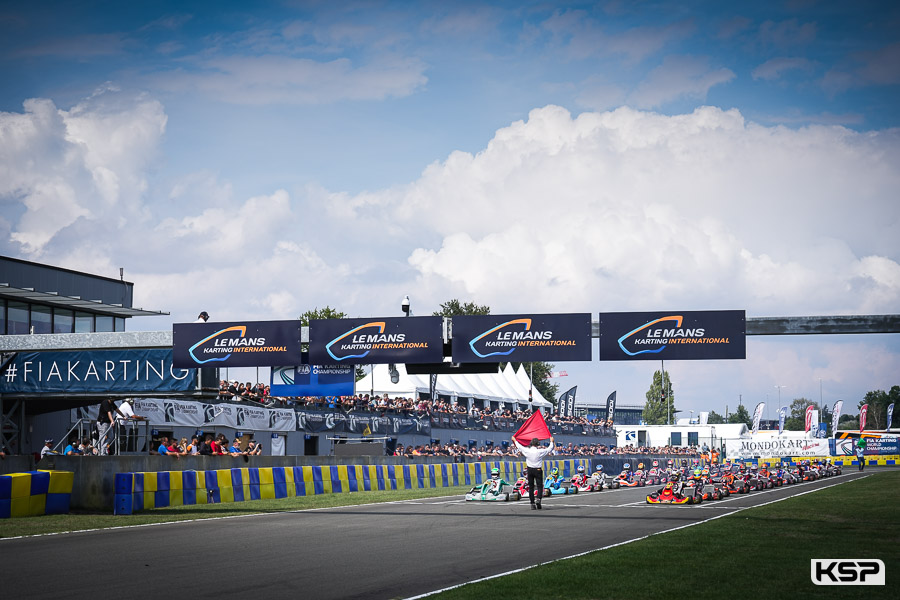 The legendary Le Mans rain did not fail to live up to its reputation, causing numerous grip changes on Saturday morning. Racing on slick tyres in the rain or on rain tyres on a fast drying track was the situation for many competitors. The choice of the right tyre pressure was a puzzle for the mechanics. In these conditions, it was hard to avoid mistakes or bad performances. The other element to take into account was tyre management. The wear of the tyres is no joke on this circuit and their preservation was on the minds of the competitors, in particular in KZ2 where seven heats and one Super Heat have to be run with six slick tyres.

It should be noted that there were already a lot of spectators around the track on Saturday and that a much larger audience is expected on Sunday. Several influential YouTubers are following the event on site in the hope of being able to try one of these powerful gearbox karts. The FIA Karting Media Department has issued a record number of accreditations, including for some TV channels. The Finals will be broadcast by Eurosport via its app and live-streaming will continue on Motorsport.com.

50 Qualifying Heats have been run since Friday afternoon. The Super Heats will conclude on Sunday morning to settle the hierarchy of the 36 finalists before the decisive races in the afternoon. With seven heats per driver, the KZ2 category ended at nightfall under the floodlights on Friday and Saturday.

KZ: Puhakka leads the intermediate ranking
Thanks to two victories and a second place, Finland’s Simo Puhakka took the lead at the end of the Qualifying Heats of the Mondokart.com FIA Karting World Championship – KZ in Le Mans. Viktor Gustafsson from Sweden did a similar job and moved up from eighth place to second place on equal points with the leader. Frenchman Jérémy Iglesias confirmed his great form by moving up from 15th to third place. Pedro Hiltbrand (ESP) came back to a convincing fourth place ahead of the fast Noah Milell (SWE). The Pex brothers (NLD) followed each other in sixth and seventh place, Jorrit (+10 pl) ahead of Stan (+16 pl). After a complicated second run, which he finished in 16th place, Emilien Denner (FRA) found himself in eighth place despite a victory and a second place. Lorenzo Travisanutto (ITA) kept his ninth place ahead of Lorenzo Camplese (ITA). Senna van Walstijn (NLD) remained 11th, while Tuukka Taponen (FIN), one of the fastest in absolute terms, dropped from seventh to 12th.

KZ2: Carbonnel takes first place
German poleman David Trefilov crossed the finish line six times in a row as a winner, but he was disqualified from the last race because he weighed less than the regulatory minimum, which dropped him to 12th place. Frenchman Arthur Carbonnel was in the lead with three wins to his credit and a gain of five places. Swiss driver Samuel Luyet followed him in second position, equal in points with Spaniard Jorge Pescador (+10 places). Twice winner, the young Italian Cristian Bertuca was fourth and the young Briton Arvid Lindblad fifth with three victories. Valentin Fritsch (DEU) was sixth in front of Danilo Albanese (ITA), three times winner. Felix Arnold (DEU), Norton Andreasson (SWE) and Robert Kindervater (DEU) completed the top 10.

KZ2 Masters: Bos maintains his lead despite the return of Fiault and Letailleur
The Qualifying Heats of the FIA Karting Masters International Super Cup – KZ2 were approached with great enthusiasm by the drivers aged 35 and over, who were delighted to take part in this first event. Six of them took a victory. Dutchman Jeroen Bos, who took pole position, managed to maintain his advantage with a first place and two convincing second places. However, two French drivers came closer, Charles Fiault and Thomas Letailleur who moved up seven places. Davide Fore’ (ITA) lost a lot of ground in his first run, in addition to a penalty during the start procedure. That’s why he has dropped down to 15th place in the ranking. Nick De Bruijn (NLD), who also won a heat, was seventh. Frenchman Johan Renaux took fourth place ahead of Belgian Thierry Delré, while Eric Ramon (FRA) moved up from second to sixth place. Meanwhile, Mirko Mizzoni (ITA) moved up 15 places to ninth and Arnaud Roséo (FRA) up 10 places to 10th.

Dubnitski takes the lead in the Academy
The third round of the FIA Karting Academy Trophy was full of surprises. In Qualifying Practice it was the category most affected by the rain and this continued in the heats on Saturday morning. There were six different winners in the six Qualifying Heats. Increasingly competitive, Estonian Mark Dubnitski managed to win in the very last metres of the last race to take the lead with a gain of nine places, ahead of South African Nikolas Roos. Poland’s Iwo Beszterda was one of the main protagonists of the competition. He finished in third place with the same score as Roos, ahead of Aleksandar Bogunovi? (SVN) in fourth. The Austrian Nando Weixelbaumer performed very well with a consistency that allowed him to keep his fifth position. Meanwhile, Guillaume Bouzar (LUX) moved up from 14th to sixth place ahead of Henry Joslyn (GBR) who moved up 10 places. William John Riley Go (PHL) secured ninth place. Winner of his first race, poleman Arthur Dorison (FRA) could not start the second and finished in 12th, far from his goal. Thibaut Ramaekers (BEL) had made up some ground in 24th position. Matias Orjuela (COL), who was 41st in Qualifying, was 25th.

The Le Mans event can be followed on the official FIA Karting Championship app for mobile devices and on the website www.fiakarting.com.