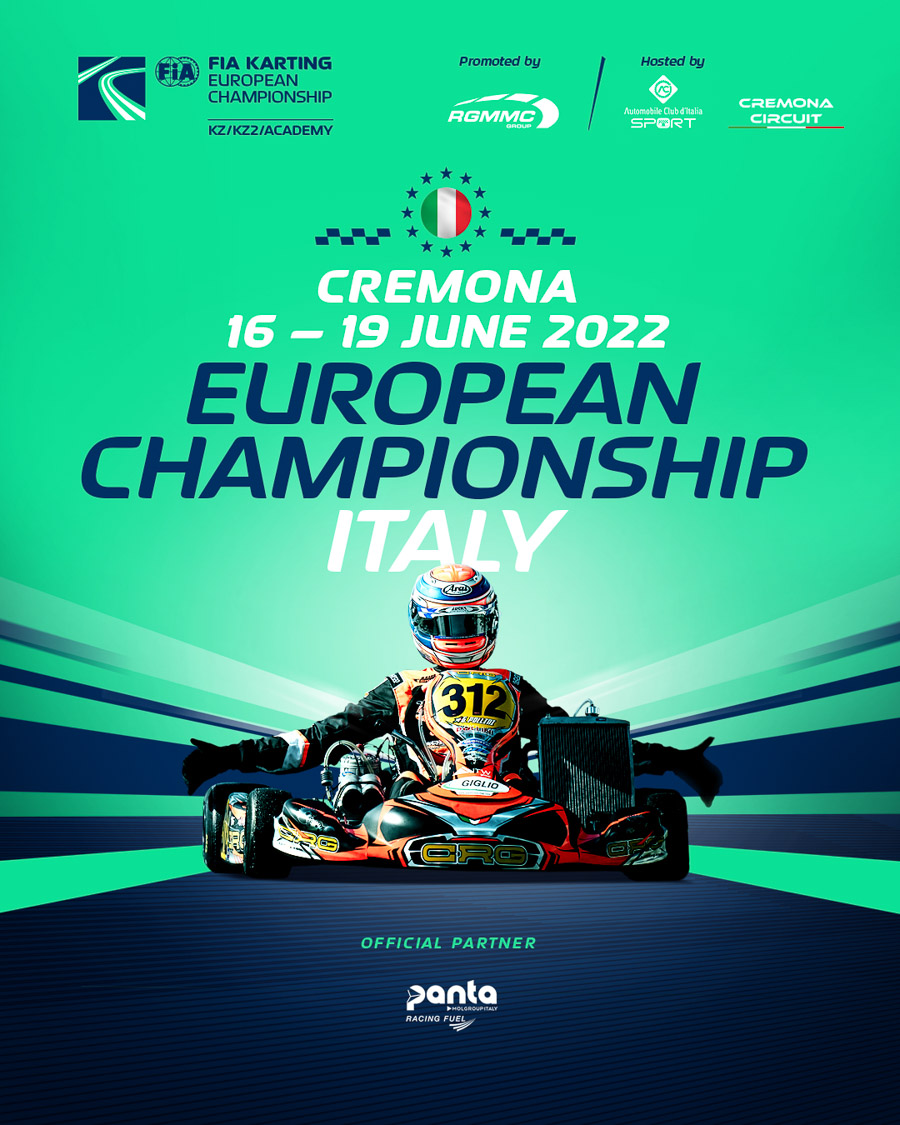 Located 40km north of Parma and 125km west of Milan, the Cremona Circuit complex includes a car circuit and a karting circuit 1210m long with a width of between 8 and 10m, created in 2015 and completely redeveloped in 2019. Its compact layout has no less than 16 corners and ensures a very fast pace to the races. Cremona is located in the heart of the Italian karting nerve centre: the main manufacturers and teams are based nearby.

The FIA Karting European Championship – KZ & KZ2 consists of two events and all results are counted towards the titles, with no room for error. Close battles are expected in Cremona, but strategy will also play a big role in the outcome of these two Championships. The FIA Karting Academy Trophy will be held over one more event in France at Le Mans at the same time as the FIA Karting World Championship – KZ in early September, but the points scored in Italy will be decisive. The field looks strong with many wild cards and 56 nations represented. Italy will be in the lead in terms of representatives with almost a quarter of the total field. LeCont will be the exclusive tyre supplier for the three categories of this event.

KZ: Emilien Denner in good position
Frenchman Emilien Denner showed an exceptional level of performance in Belgium and scored many points. He will undoubtedly be the man to beat in Italy to win the FIA Karting European Championship – KZ. His lead gives him an important strategic advantage over his rivals. Italian Paolo Ippolito remains a serious contender, only six points behind the leader, who will also have to deal with the strong potential of the other Italian Matteo Vigano. Two great champions like Jorrit Pex (NLD) and Pedro Hiltbrand (ESP) can always be formidable in this type of situation. Senna van Walstijn (NLD), who was slightly behind in Genk, should try to make up for it in Cremona, while Lorenzo Travisanutto (ITA) only wants to assert his speed in KZ.

Advantage for Tom Leuillet in KZ2
The competitiveness and strategy of Frenchman Tom Leuillet worked wonders in Belgium. He is approaching the final round in the best possible conditions thanks to his six-point lead over Germany’s David Trefilov, which allows him to take a step back. Markus Kajak (EST) remains under threat from two young and promising talents, Arvid Lindblad (GBR) and Kris Haanen (NLD). There is no shortage of good drivers in the FIA Karting European Championship – KZ2 field and the event should see some great racing.

Academy: Decisive race for Dorison
Five young drivers showed their mettle in Genk as heat winners in their Exprit/Vortex one-design karts supplied by OTK Kart Group and equipped with LeCont tyres. Frenchman Arthur Dorison’s determination and strategy made the difference in the FIA Karting Academy Trophy. But the gaps between the contenders are small and the course of the races can always reveal surprises. Moreover, changes from one event to the next are not uncommon among these 12 to 14 year old athletes. In very different styles, the Filipino William John Riley Go and Luxembourg’s Guillaume Bouzar remain formidable contenders. Luca Houghton (BHR) and Jind?ich Pešl (CZE) are not set in stone for a top five finish. Joel Pohjola (FIN), Aleksandar Bogunovi? (SVN), Henry Joslyn (GBR) and Nikolas Roos (ZAF) are among the drivers to watch.

The Cremona event can be followed on the official FIA Karting Championship app for mobile devices and on the website www.fiakarting.com.