The 2020 FIA Karting World Championship – OK & Junior in Portugal has just started in wet weather on Friday 6th November. After the Qualifying Practice sessions that were complex to manage, Brando Badoer (ITA) took the Junior pole position and Matheus Morgatto (BRA) remained the fastest in OK. 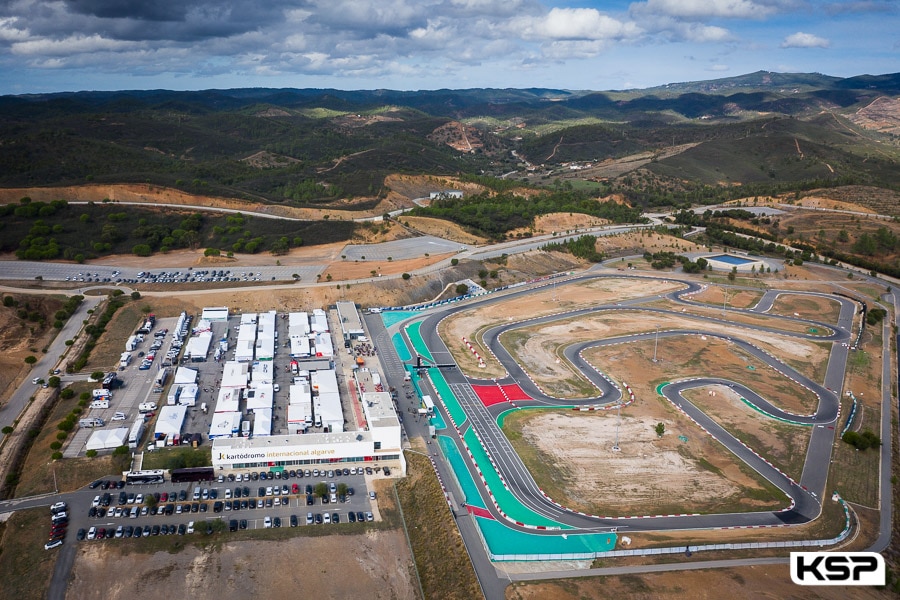 Most of the Drivers entered for the major Competition of the season were present at the Kartódromo Internacional do Algarve with 163 names on the Qualifying Practice list. Each category was divided into four groups and the sessions alternated between Junior and OK. Although the rain tyres, LeCont in OK and MG in Junior, were used, the temperature remained mild for this time of the year.

Before the start of the Qualifying session, the participants had the opportunity to get familiar with the track conditions during their two Free Practice sessions that opened the day. Despite the rain, the hilly configuration and the quality of the Portimão surface ensured good visibility and regular grip on the 1531 metre Portuguese track. The rain stopped in the middle of the afternoon, but the circuit didn’t really dry out and the times didn’t change significantly. The hierarchy that has been set up on Friday has some surprises in store and may have a significant impact on the rest of the Competition.

Junior: Badoer takes his chance
The performances didn’t seem to evolve throughout the four timed sessions of the FIA Karting World Championship – Junior. Evan Giltaire (FRA), the fastest in the first session was for a long time a probable poleman. Only two Drivers managed to beat him, at the end of the fourth session. Brando Badoer (ITA) finally set the best time of 1’12”509 ahead of Christian Ho (SGP) 63 thousandths later. Badoer took an important pole position against Giltaire. Leader of the second session, Tymoteusz Kucharczyk (POL) took third place and Ean Eyckmans (BEL) took fourth thanks to his speed in the third session. Among the top Drivers of the season, Tuukka Taponen (FIN) was 12th, European Champion Ugo Ugochukwu (USA) 14th and Arvid Lindblad (GBR) 33rd.

OK: Morgatto ahead of Antonelli
Matheus Morgatto (BRA) drew the right card by going out in the first session, the fastest of the four. His time of 1’11”444 has never been beaten and he obtained a very rewarding pole position in the World Championship against Andrea Kimi Antonelli (ITA), the European Champion and favourite of the competition, who was four tenths further back at the front of the second session. Leader of the third session, Callum Bradshaw (GBR) took third place in front of Pedro Hiltbrand (ESP), the fastest driver of the last session. Morgan Porter (GBR) and Alexander Hartvig (DNK) finish in 5th and 6th places. Among the fast drivers, Lorenzo Travisanutto (ITA) took an interesting 7th position, followed by Taylor Barnard (GBR) and Luigi Coluccio (ITA). On the other hand, this phase was unsuccessful for Nikita Bedrin (RUS) 23rd, Joe Turney (GBR) 30th and Rafael Chaves Camara (BRA) 32nd.

Provisional programme of the Portimão Competition:

The Portimão Competition can be followed on the official FIA Karting Championship application for mobile devices and on the website www.fiakarting.com.