Another international title for Sodikart

The Sodi Racing Team was at the forefront of the highly anticipated World KZ Championship in Le Mans. Timed Practice and heat victories put the very competitive Émilien Denner and Senna Van Walstijn in a position to claim a podium. Unfortunately, the Final race did not turn out in their favour despite the fastest lap in the race. However, the two top six finishes achieved by Senna and Emilien were a reward for the efforts of the entire team. Extremely positive performances were also recorded in the KZ2 World Cup, where the CPB Sport team achieved an excellent overall result. The Sodikart factory would like to congratulate Thomas Letailleur and Eric Ramon for their magnificent one-two finish in the first edition of the KZ2 Master International Super Cup, which confirmed the excellence of the Sodi chassis in the gearbox categories. 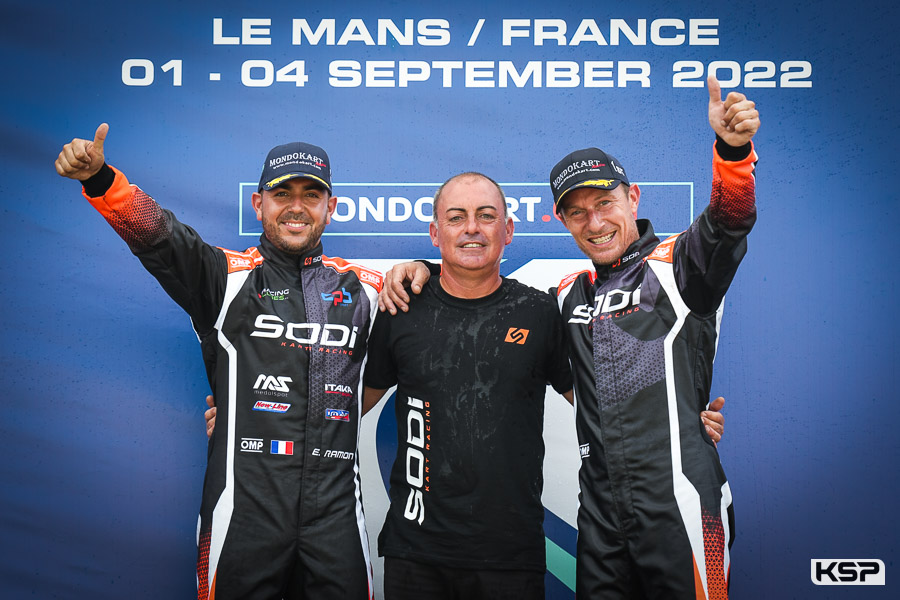 The World Championship in Le Mans will be remembered as a great sporting and popular success, with countless spectators present during the weekend and an important media impact for karting. Only 200 km away from the Le Mans international karting circuit, the Sodikart factory was delighted to welcome a large number of employees, guests and customers in a space specially dedicated to this event. On the track, the colors of Sodi chassis shone in all conditions and all categories.

Émilien Denner ranked 5th in Timed Practice and immediately confirmed his ambitions by winning his first Qualifying Heat on Friday. The next day, it was Senna Van Walstijn’s turn to win with the fastest lap in the race. Denner was able to set two more fastest laps afterwards, including in the Final. “Unfortunately, both Emilien and Senna had an incident in one of their heats,” said Mansel Smith regretfully, team manager of the Sodi Racing Team. “At such a high level of competition, this is not forgivable and they were relegated to 6th and 7th on the grid. Both were very fast in the Final, but they had to be satisfied with 5th place for Senna and 6th for Emilien”.

For the KZ2 World Cup, 122 drivers were at the start, 17 makes of chassis were represented and the CPB Sport team managed to take seven drivers equipped with Sodi-TM Racing to the Final! 15 year old Matteo Spirgel confirmed that he was one of the hopefuls of the category after his magnificent performance where he finished in 7th position. Jean Nomblot and Thomas Imbourg were ranked 14th and 15th in the Final after climbing 21 and 10 places respectively, while Arthur Lehouck, Vincent Wanegue, Tim Gerhards and Corentin Rousseau brilliantly won their place for the Final.

CPB Sport was also delighted with the title of Vice-Champion in the KZ2 Master International Super Cup for Eric Ramon, who had not raced for a year and who particularly appreciated the effectiveness of his equipment. The victory went to an imperial Thomas Letailleur. The Ludo Racing driver won the Final and added another line to the Sodikart factory’s international record of achievements.

Another podium for Sodikart before the World Championship