Home Press releases An emotional end to the Championship

For Australian hopeful James Wharton, it was a FIA Karting European Championship full of lessons that has just ended in Germany. On the Wackersdorf circuit, where the tension was palpable, the young driver with the official Parolin Racing Kart team was again a finalist. However, too many incidents impeded his progress so he had to be satisfied with 26th place in the Final. 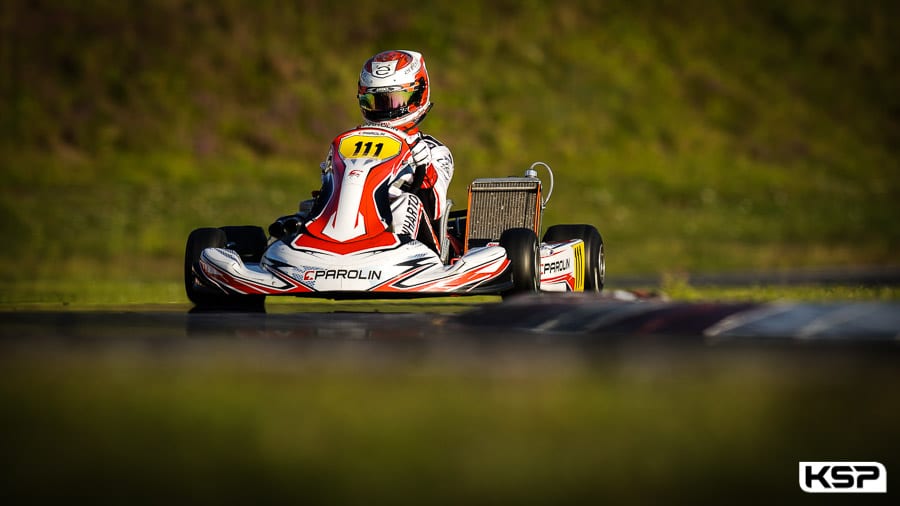 As motivated and determined as usual, James Wharton worked hard with his team to perfect the set-up of his equipment during the Free Practice sessions. “The first two rounds of the Championship were held at Zuera in Spain and Sarno in Italy, which are long, fast and wide tracks. Here, it was almost the opposite,” said James. “But this is a circuit that I like, this is where I won my first race in Europe in Rotax Junior. Free Practice ended with a 4th place in my group and I was confident before the Qualifying session. Unfortunately, I didn’t manage to repeat the same time and I was in 7th place in my group, 25th overall.” There were 65 drivers registered in total.

A great start in the Final

James Wharton’s task became even more complicated in the first race on Saturday morning, where the Australian had to retire on the first lap. Nevertheless, he recovered perfectly afterwards. He moved up to 7th place in the next race with the second best lap in the race. He was even 5th in another one! Unfortunately, a crash at the beginning of the last heat took him out again, so that he had to be satisfied with the 33rd place on the starting grid for the Final.

“Due to my distant position, we had to make a specific technical choice to favour the first part of the race. In fact, I made a very good start and then I managed to gain several places. At this point in the race, the objective of scoring more points in the European Championship was possible. Then, my end of the race was more difficult and I had to settle for taking the chequered in 24th position. To make matters worse, my front fairing suffered in the duels in the Final and I received a five second penalty that put me back two places.”

For his first year in OK, the category that brings together all the best young international hopefuls before they move on to cars, James Wharton has learned a lot and made progress during the European Championship. Now the Australian will focus on the World Championship, which will take place in Portimao (southern Portugal) from 5th to 8th November 2020.

Morgatto, competitive and top-8 in Wackersdorf