After winning the Final and taking 2nd in the OK Championship with Deligny, 2nd in Mini with Costoya and 5th in OK-Junior with Khavalkin, Parolin Motorsport has again recorded significant progress during the closing of the WSK Euro Series on the Sarno circuit. The consistency of the Italian brand’s performance in the three categories in which it was entered is absolutely remarkable. 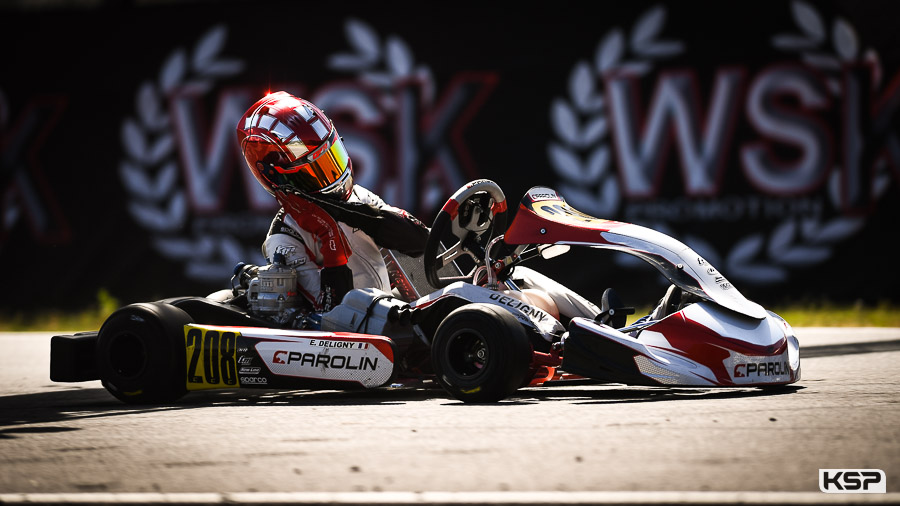 The heat was back on at the foot of Vesuvius during the last weekend of July as the OK and OK-Junior teams anticipated the upcoming FIA Karting World Championship. Furthermore, Parolin Racing Kart was the best represented chassis brand in Mini with over 40% of the field. Pole position, top two in the Final and the Championship were achieved with the Parolin chassis.

“In a more competitive context, the performance of the team and our Parolin / TM Racing in Sarno was even more convincing than in Lonato two weeks before,” analysed Marco Parolin. “The races were tough on the fast Neapolitan circuit. Enzo Deligny, who had won almost everything so far in OK, didn’t start very well in the Final. 4th after three laps, he managed to catch up with the leader 1,8” ahead of him and to overtake him to take a big victory.

“In OK-Junior, Anatholy Khavalkin’s retirement in one heat prevented him from fighting for the Final victory, but not for the top five of the race and of the Championship where he made a spectacular progression. After a run at the top of the Mini class, Christian Costoya conceded the Final victory by only one hundredth of a second and finished 2nd in the Championship. Our progress on the circuit that will host the FIA Karting World Championship – OK and OK-Junior in mid-September was significant. We will continue to work to improve the competitiveness of the equipment in order to approach the big world event with the best chances. At the beginning of September, the WSK Super Cup for Mini will also be an important stage for the youngest drivers at La Conca.”

Christian Costoya
10th in Qualifying, 2nd in the heats with four wins, winner of Prefinal B with the fastest lap, 2nd in the Final and 5th in the Championship with a gain of 31 places.

Dries van Langendonck
14th in Qualifying, 8th in the heats (one win and two top threes), disqualified from the Prefinal due to an electrical problem, 7th in the Final (+15 pl) and 10th in the Championship

Anatholy Khavalkin
Poleman in Qualifying, 8th in the heats with four wins and one retirement, 2nd in the Prefinal (+2 pl), 5th in the Final (+1 pl) and 5th in the Championship (+31 pl).

Zac Drummond
15th in Qualifying, 12th after the heats (+3 pl), retirement in the Prefinal, 24th in the Final (unhooked front fairing penalty) and 15th in the Championship.

Enzo Deligny
4th in Qualifying, 1st after the heats with two wins, 1st in prefinal, 1st in Final and 2nd in Championship (+3 pl).

Khavalkin comes back strongly in 3rd place in the Euro Series