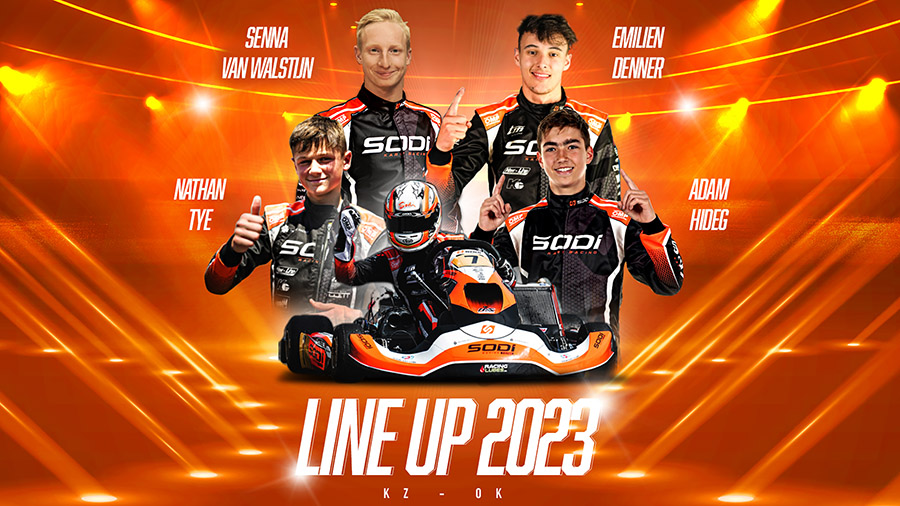 In 2023, Sodi will make its grand return to the premier category of direct drive karting after a 15-year absence and a brief experience in 2018. The French brand’s return to OK has been prepared by several increasingly convincing seasons in OK-Junior thanks to the entry of Jean-Philippe Guignet and the Trèfle Racing team alongside Mansel Smith. British driver Nathan Tye Jr won last year’s Champions of the Future series before finishing on the podium of the European Junior Championship, while Hungarian Adam Hideg became vice World Champion in Sarno. These two young 13 year-old drivers will represent Sodikart’s colours with strong ambitions this season in OK with a full programme. The Sodi chassis will be powered by TMs prepared by GFR.

In KZ, the Frenchman Émilien Denner and the Dutchman Senna van Walstijn will pursue their objectives against a very strong field. Very competitive in 2022, they have brilliantly illustrated themselves in WSK and in the European Championship before finishing 5th and 6th in the World Championship in Le Mans. Sodikart is more motivated than ever to win a major title in KZ.

The four official members of the Sodi Racing Team represent a strong involvement of the French factory at the highest level of international competition, in addition to the increasing number of drivers who trust French chassis in KZ2 with CPB Sport and in OK-Junior.

Birel ART announces its 2023 line up