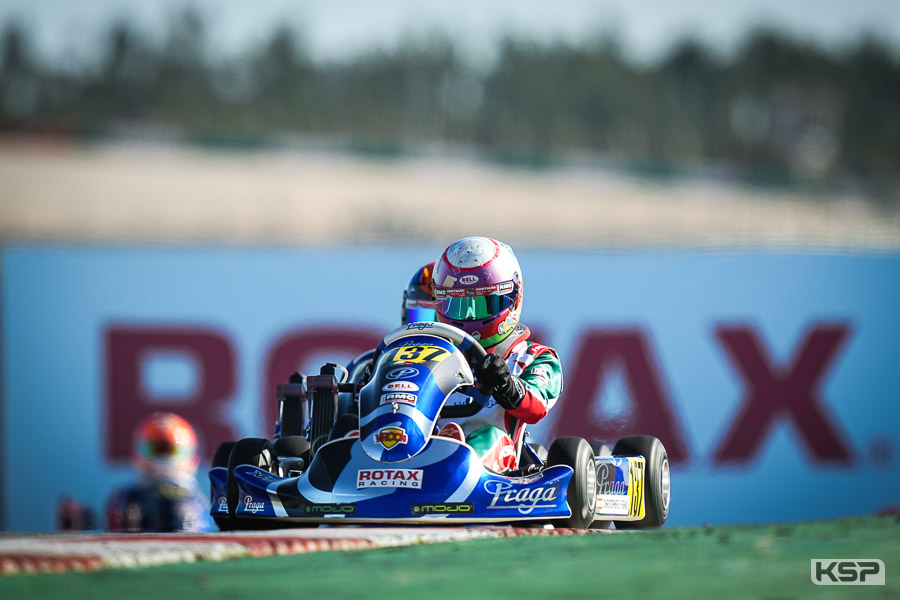 There were blue skies and bright sunshine on Friday afternoon in Portimao for the Mini Max Prefinals of the Rotax Max Challenge Grand Finals.

Christopher El Feghali (LBN) got off to a perfect start at lights out in Prefinal A followed by Sebastian Minns (GBR), Vasileios Malamis (GRC), Jacob Ashcroft (GBR) and Kai Johnson (USA). Aloïs Girardet (FRA) crashed out in 32nd position. Malamis took the lead on the third lap and the first five drivers were already more than 2″ behind the pack. The red flag was waved on the fourth lap. The race started again in single file a quarter of an hour later with seven laps to go.

El Feghali took the opportunity to take P1 from Malamis, then Minns passed Ashcroft in 3rd place. Minns then took the lead with Malamis in his wheeltracks and El Feghali 3rd. The battle was on. El Feghali moved back into 1st place on lap 7, with Ashcroft following in 2nd place. Further back, Luka Scelles (FRA) resumed his courageous climb. El Feghali controlled the race until the chequered flag to add a new victory to his score. Ashcroft was 2nd, Malamis 3rd, Minns 4th and Zdenek Babicek (CZE) was 5th ahead of Johnson. Scelles was 12th (+12 pl), Girardet finished 29th after his first lap mishap and a spoiler penalty.

Harry Bartle (GBR) was leading from the start of Prefinal B under the threat of Thomas Pradier (FRA) and Louis Baziret (FRA). Toms Strele (LVA) had dropped back to 8th position. Gage Korn (USA) and Max Sadurski (NLD) followed in the top five. Baziret took the lead on lap 4, Strele was back in the top five. Bartle took over the lead on the next lap with the fastest time. Pradier then went on the attack and took the lead by being the fastest. Bartle waited until the start of the last lap to retake the lead, but Pradier crossed the finish line as the winner with the fastest lap in the race. Bartle was 2nd, Baziret 3rd, Korn 4th and Strele 5th.