After very changeable conditions during yesterday’s first on track action with a hint of sunshine from time to time, all 394 competitors from the 60 nations represented here this week would head out onto the circuit to be challenged during the first set of Non-Qualifying Practices. 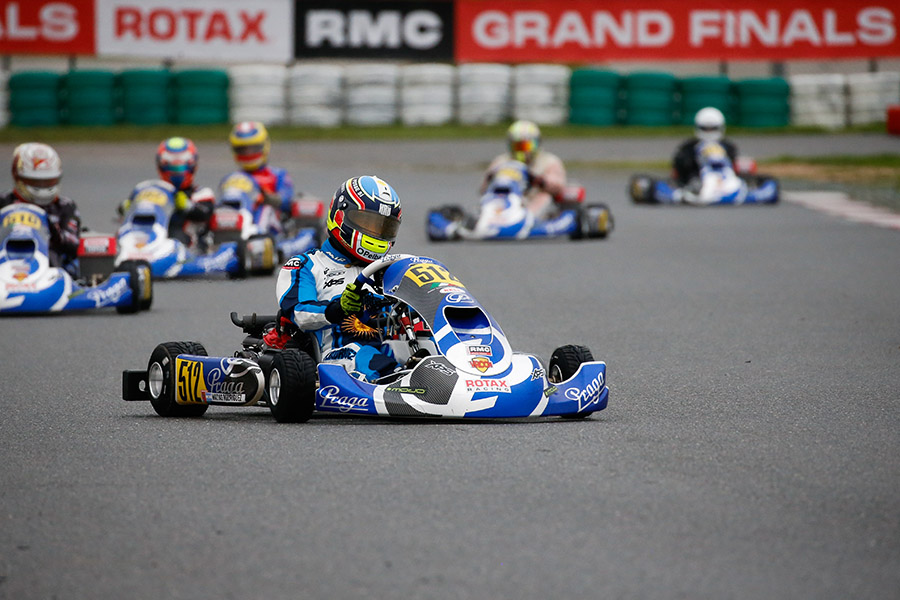 It may not have been the best way for the drivers in all eight classes to get used to their brand chassis supplied by Sodikart, Praga by IPK and BirelART, but there was a lot of hard work to get preparations underway to ensure good pace around the 1.531-km layout.

Today saw the final set of Non-Qualifying Practice sessions and the first part of Qualifying Practice with Senior Rotax Odds going out first at 08:28 UTC, as the intensity out on track continued to increase and the atmosphere really echoing that with the grandstands and the paddock tent filling up with drivers, families and supporters on site.

The weather again was causing difficulties in setting up the cars, with the circuit in between being completely dry or wet throughout the day, keeping the drivers and mechanics guessing on how to get the best set-up possible, but some luck saw the first handful of Qualifying sessions ending up being dry.

Don’t miss out on any of the action via our Live Stream, along with our Live Studio from the KIA in Portimão, and we will also keep you all informed with the latest action and news at this impressive venue in the Algarve with our Daily Reports, our Social Media channels and our YouTube Channel. 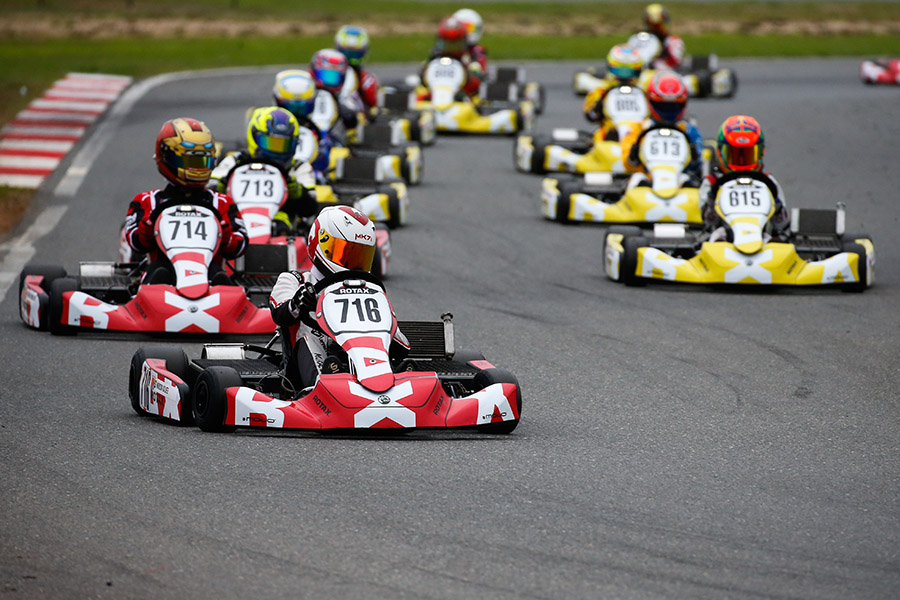 Soltys would again top the final NQP session of the event by improving his time from the previous session to a 1:01.219, 0.486 seconds ahead of Sweden’s Joel Bergstroem, as Daems, Portugal’s Henrique de Oliveira, (#605) and Poland’s Colin Wazny (#608) completed the top five. The top eight drivers were separated by just under a second.

In Qualifying however, it was Bergstroem that stormed to pole position with a 1:01.421 by a mere 0.085 seconds ahead of Soltys, with Ibzen third, where the top three were split by just over one and a half tenths of a second. Switzerland’s Christopher Holst (#602) took fourth in front of Belgium’s Daems, with the most competitive session so far, as all 16 drivers were just under 1.2 seconds apart.

The final NQP session for the drivers would be topped by Koester (59.885), as both he and Japan’s Shota Kitazono (#712) were the only two drivers to break the 60-second barrier. Lin in the #709 was third, ahead of Dowler and Njeim, with the top five only separated by 0.240 seconds.

But Sweden’s Jesper Sjoeberg (#706) took pole position in Qualfiying by 0.101 seconds in front of Vargas, with Dowler, Njeim and Koester completing a close top five that was covered by 0.354 seconds. It also saw the top ten covered by just over nine tenths of a second. 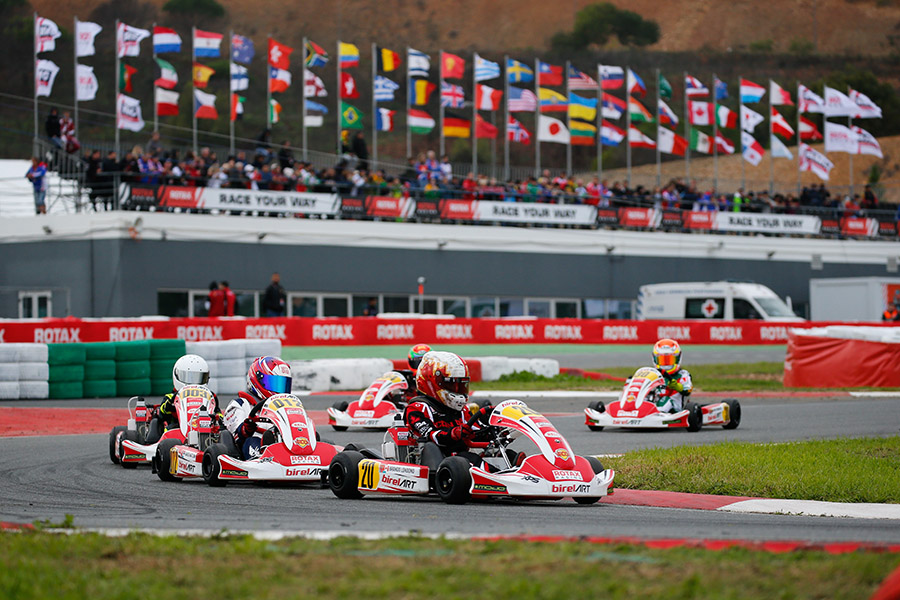 Micro MAX:
The MICRO MAX results for the qualifying SESSION are provisional at this stage, pending further confirmation.

It was another good session for the UAE’s Maxim Bobreshov (#32), who was fastest in the penultimate NQP session for the class, posting a 1:08.832, 0.017 seconds quicker than Lithuania’s Majus Mazinas (#22). Martim Marques from Portugal (#26) was third, ahead of Serbia’s David Matlak (#12) and Great Britain’s Daniel Minto (#28), whilst the top 20 drivers completed by Canada’s James Bedard (#25) were within 1.5 seconds of the top time.

Qualifying saw Minto take pole position by the smallest margin of just 0.018 seconds from Becker, with Manson and Rajpold setting the same time, with the former taking third having set the time first on track. There was also another Briton in the form of Albert Friend (#8) who completed the top five, just 0.115 seconds off pole, as it could have been anyone in the top 25 and maybe further down the order that could have been on the top spot. 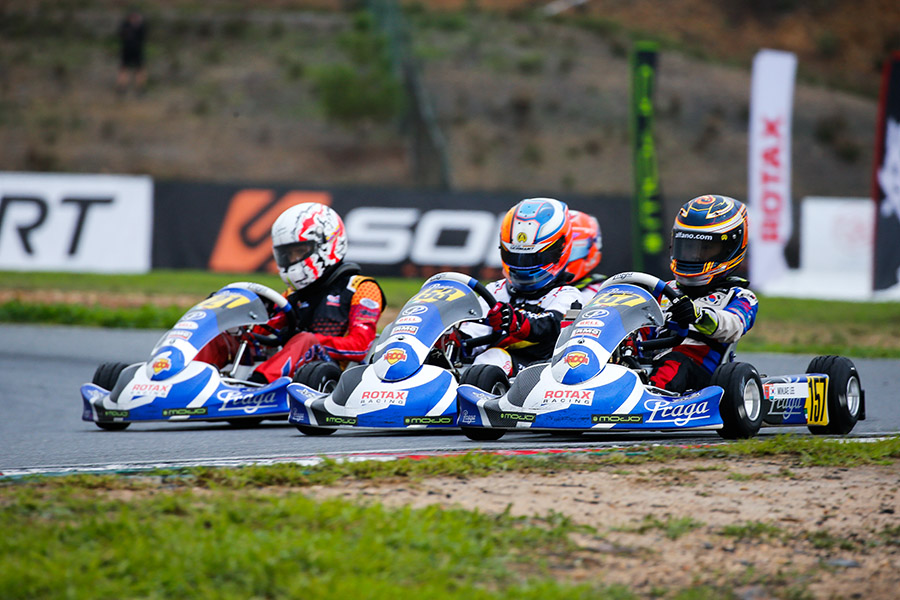 Mini MAX:
Joao Pereira from Portugal was fastest for the first session in odds, putting down a 1:05.247 as a benchmark, with Poland’s Aleksander Rogowski (#141) and Franciszek Belusiak (#145) completing a very close top three within 0.095 seconds of each other. France’s Luka Scelles (#135) and Lebanon’s Christopher El Feghali (#137) set exactly the same lap time, within a tenth of Pereira, with the top 30 drivers in the session being covered by only 1.5 seconds.

The final session for the odds saw El Feghali lead the way in front of 33 other drivers that hit the track, with a 1:04.779, 0.079 seconds faster than Scelles. All the while Pereira took third from both Poland’s Patryk Michalik (#151) and Latvia’s Toms Strele (#133) rounded out the top five. It also saw the top 27 drivers separated by just over a second.

It was also a clean sweep of the even-numbered practice sessions for Bartle, as the Briton was fastest again with a 1:04.706, with Reijs second ahead of countryman Max Sadurski (#150). Pradier and Malaysia’s Travis Teoh (#104) rounded out the top five, with the top 30 covered by only 1.182 seconds.

El Fehgali was the fastest driver overall in the two group qualifying, posting a 1:17.497 lap time in the odds group, which was over half a second quicker than Bartle who topped the times in evens. Finland’s Rasmus Koskinen took third overall in the #107, ahead of both Ashcroft and Minns, who completed the top five overall. Malamis was sixth fastest ahead of Denmark’s Casper Nissen (#111), the USA’s Kai Johnson (#132), with Chile’s Vincente Garcia (#125) and Portugal’s Afonso Ferreira (#168) rounding out the top ten drivers over the combined results..

Mini MAX will be back on track for Warm-Up at 10:12 UTC (11:12 CET) tomorrow with the odd numbered group going out first. 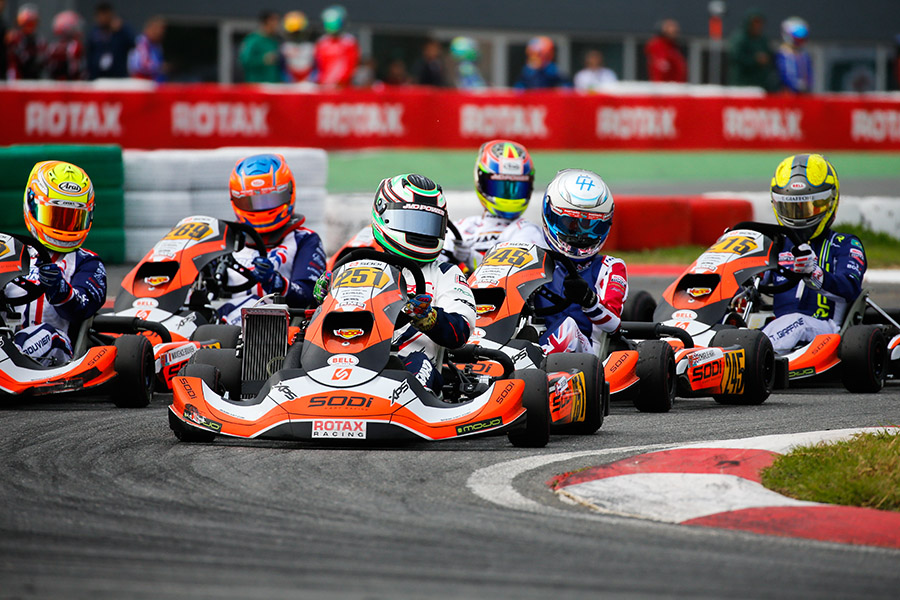 The penultimate session for the evens saw 35 drivers covered by a mere 1.325 seconds, which saw Denmark’s Mikkel Pedersen go fastest of all with a 1:00.925, followed by Switzerland’s Tino Sidler (#218) with Japan’s Soichiro Shioda (#216) third. Kuwait’s Muhammad Wally (#202) and Canada’s Jensen Burnett (#248) completed the top five.

Belgium’s Tommie Van Der Struijs gave the Red Devils something to cheer about in the final session for evens, as the #232 went fastest with a 1:03.227, in front of Krygyzstan’s Egor Stepanov (#224) by only 0.032 seconds, with Pedersen from Denmark third. Sidler and Colombia’s Sebastian Garzon Orozco (#222) fifth.

Junior MAX will be back on track for Warm-Up at 08:28 UTC (09:28 CET) tomorrow with the odd numbered group going out first. 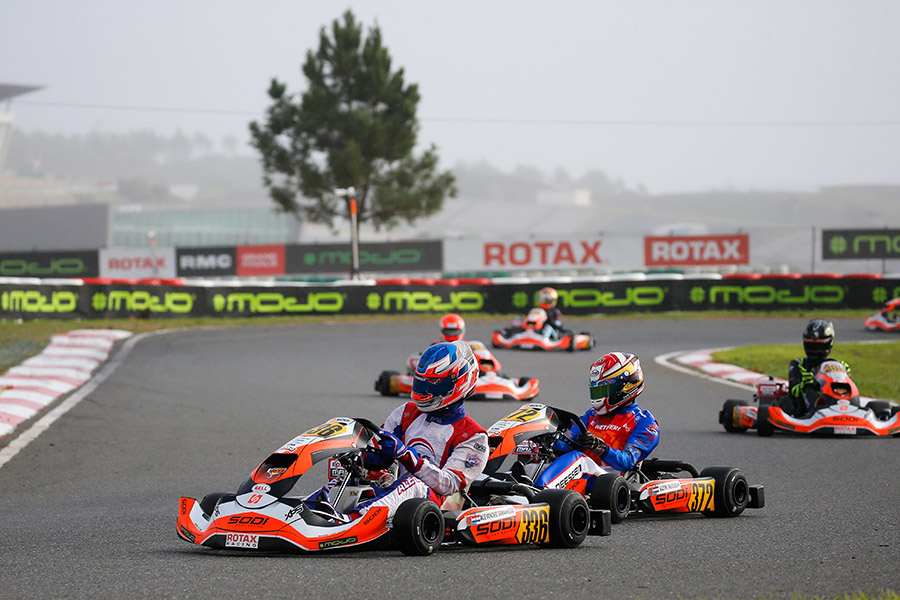 Senior MAX:
Non-Qualifying Practice got underway for the third session for odds, as Brazil’s Giuliano Raucci (#341) set a welcome benchmark of a 1:05.960, 0.044 seconds ahead of Germany’s Janne Stiak (#343), whilst Gabriel Cacolio from Portugal (#367) secured third place. Great Britain rounded out the top five in the session, courtesy of Brandon Carr (#349) and Kai Hunter (#369).

The final odds practice session saw Rillaerts fastest ahead of Czech driver Eliska Babickova, as the young Belgian posted a 1:00.964, 0.210 seconds ahead of the #371. Cacoilo was third ahead of Donyka as Australia’s Toby Spinks pushed hard to take fifth in the #363, with the top 14 only covered by 0.903 seconds.

Rounding out the final practice session, it was Hungary’s Zsombor Kovacs (#370) that set the pace with a 1:02.627, nearly half a second faster than Finland’s Miska Kaskinen (#312), with Slovakia’s Krisztian Vincze (#310).

Senior MAX will be back on track for Warm-Up at 08:54 UTC (09:54 CET) tomorrow with the odd numbered group going out first. 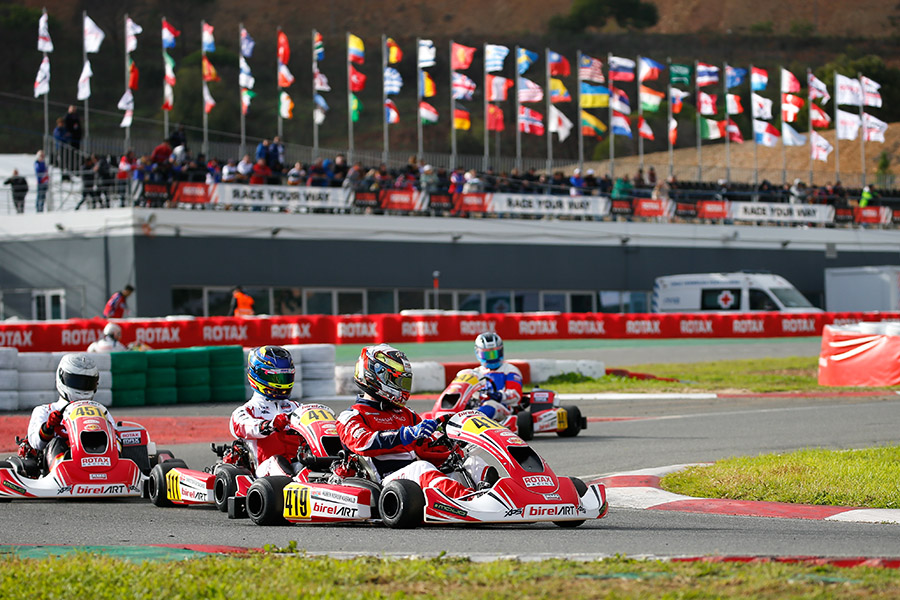 DD2:
Practice session three for odds saw Poland’s Dawid Maslakiewicz (#455) hit the top of the timesheets with a 1:00.050, 0.004 seconds faster than France’s Nicolas Picot (#417). Latvias Emils Akmens (#427) and Patriks Noels Locmelis (#406) rounded out the top four places, with Australia’s Jonathon Marcusson (#457) fifth. The top 26 drivers that were completed by Sweden’s Rasmus Fridell (#407) were separated by just over a second.

Six of the 60 nations were represented in the sharp end of the third session for the evens, with Great Britain’s Mark Kimber quickest on a 59.441 with the top 31 drivers within 1.1 seconds. He was ahead of Denmark’s Rasmus Vendelbo (#414), Austria’s Philipp Moitzi (#442), the Netherlands’ Kris Haanen and Petr Bezel (#446 – CZE) who completed the top five.

The fourth odds session saw Maslakiewicz increase his pace with a 58.958, just fractions ahead of Finland’s Axel Saarniala (#433), whilst Locmelis, Akmens and Picot rounding out the top five, with just under two tenths of a second separating them, whilst the top 32 drivers were covered by only 0.941 seconds.

Kimber was also very much at the forefront of the fourth evens session, going in with an effort of a 58.907 seconf lap time, with Czech brothers Petr and Jakub Bezel (#456) rounding out a close top three, with Moitzi fourth. France’s Antoine Barbaroux made another top five appearance in the #424 entry, with 31 drivers within just over nine tenths of a second of each other.

Saarniala would top the times in the final practice session for the odds, posting a 58.726, ahead of Maslakiewicz, with Germany’s Jannik Jakobs (#437) in third place. Slovenia’s Xen De Ruwe would place fourth, ahead of Picot, with the top 30 covered by just under 1.1 seconds.

Kimber would again top the timesheets for evens In their final NQP session with a 58.824, 0.052 ahead of Barbaroux, whilst Petr Bezel, France’s Hugo Croquison (#422) and Canada’s Lucas Pernod (#440) closing out the top ten. It also saw the top 34 drivers covered by exactly a second. 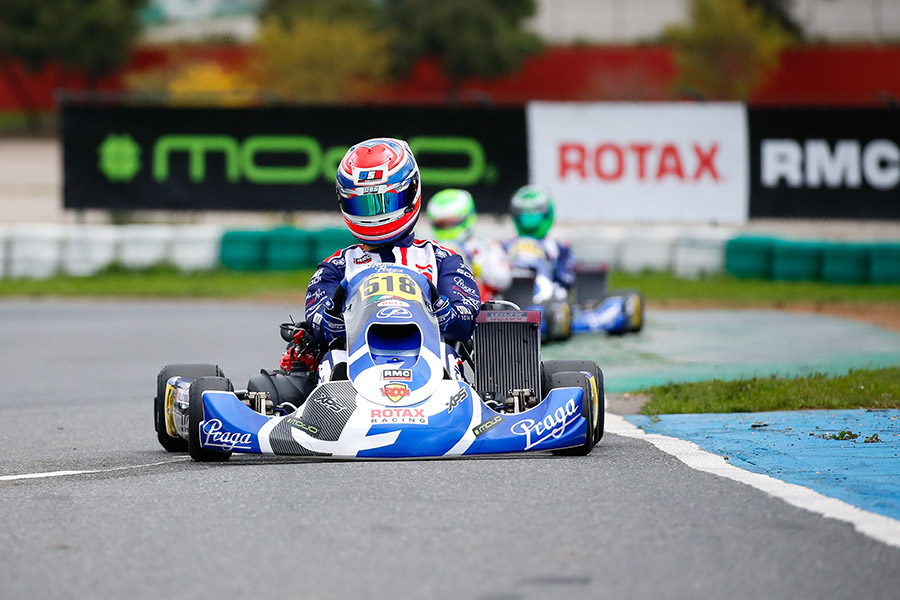 DD2 Masters:
The third practice session for DD2 Masters saw Germany’s Denis Thum (#503) secure the fastest time with 1:00.858, with Brazil’s Fernando Guzzi (#524) and France’s Paul Louveau (#518) completing the top three, who were covered by 0.328 seconds. Troy Bretherton from Australia (#532) and Poland’s Slaowmir Muranski (#530) rounded out the top five positions, with the top 20 completed by just under 1.5 seconds.

Thum also was quickest in the next session, really upping the pace for the competition to follow with a 59.174, edging out Italy’s Claudio Pagliarani (#513) by just 0.015 seconds. France’s Vivien Cussac-Picot (#517) was third ahead of Poland’s Slawomir Muranski (#530) with the #516 of Charles Seguin from France fifth, where the top 30 were separated by only 0.629 seconds.

It was three for three for Thum in the final NQP session, as he was marginally slower with a 59.198, 0.019 seconds ahead of Pagliarani, as Spain’s Javier Campo (#529) took third in the session, with Belgium’s Fabio Kieltkya (#531) and France’s Charles Seguin completing the top five. It also saw the top 34 drivers covered by a mere 0.908 seconds.

But it was Louveau who took pole position in the final Qualifying session of the day amidst different conditions, putting in a 1:12.567, 0.270 ahead of Slovakia’s Martin Konopka (#505) and Brazil’s Guzzi, with Kristaps Gasparovics from Latvia (#533) and Pagliarani rounding out the top five. It also saw the top 11 drivers covered by only 0.935 seconds.

Rotax E20: the Power of Silence