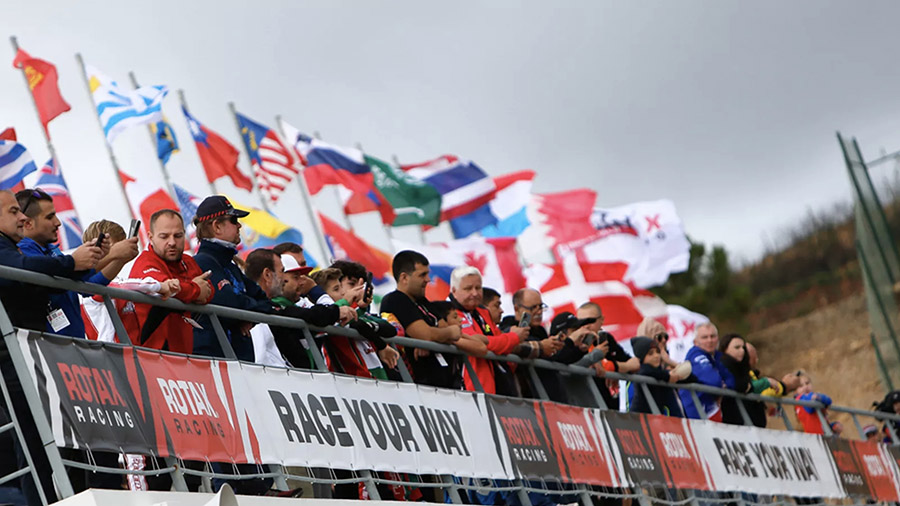 We look back at yesterday, when the 2022 RMC Grand Finals were truly opened via the Welcome Briefing in the morning. 394 drivers received their brand new karts through the customary raffle on the main start-finish straight underneath the beautifully sunlit Portuguese skyline.

Along with that, drivers would also head to the nearby Autodromo Internacional do Algarve for the mandatory briefings that afternoon, with the paddock tent being a busy hive of activity all day long as the brand-new karts would be prepared fully, with every nut and bolt tightened and fastened.

Today saw all eight classes head out onto the 1.531-km circuit, which has plenty of technical sections, significant elevation changes and a very long start-finish straight. Changeable weather was the order of the day here in Portimao, with overnight rainfall, patches of sunshine and further intense periods of saturation of the circuit over the course of proceedings, which saw temperatures hit as high as 20 degrees Celsius.

We’ll keep you up-to-date with all the latest news and updates on and off-track with our Daily Reports, social media posts and stories and videos on our official YouTube channel. You won’t miss out on any of the action from the circuit via our Live Stream which starts tomorrow, Tuesday November 22, 2022 with the first broadcast live at 16:30 UTC.

Let’s take a look at what happened during this week’s first set of practice sessions:

E20 Junior
The first session out on track saw Sweden’s Joel Bergstrom (#613) set the fastest time with a 1:15.739, 0.931 seconds in front of Thijs Stevens from the Netherlands (#601), with Belgium’s Tijs Daems completing the top three in the #605. With 13 of the drivers having set a lap time, Switzerland’s Christoper Holst (#602) and Slovakia’s Michal Soltys (#615) would round out the top five drivers that were covered by 1.498 seconds.

The third and final session for the day saw Soltys again top the session as fastest, going quicker than the previous time out on track with a 1:01.619, 0.172 seconds in front of Stevens, with Bergstrom third. Poland’s Thomasz Ibsen (#603) was fast enough to take fourth, edging out Daems by just over a tenth. All 16 drivers in the final session were within 1.410 seconds overall.

E20 Senior
Jesper Sjoeberg was the quickest in the first of three sessions in Portimão for E20 Senior, topping the time sheets with a 1:14.332, 0.366 seconds in front of Germany’s Luca Koester (#711). Spain’s Raul Vargas (#717) was the third fastest of the class, posting a best effort of a 1:15.637, with Chinese Taipei’s Chen Han Lin (#709) and Lebanon’s Matthias Njeim fourth and fifth respectively.

Practice session three saw Koester again fastest on a 1:10.146, just over a tenth off his best effort in the previous session, but would be 0.164 seconds ahead of Le Moine this time around. Sjoeberg was third, ahead of Dowler and Njeim, with the top five covered by 0.234 seconds. It was also the closest session in terms of lap times, as the top 16 were covered by exactly 1.8 seconds. 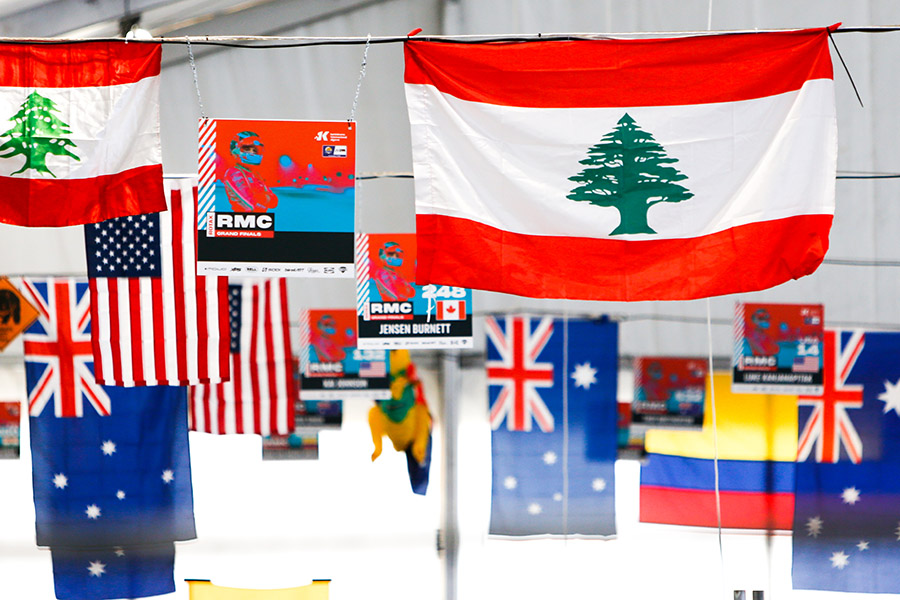 Micro MAX
Great Britain’s Albert Friend (#8) was the quickest driver out of the 35 that were able to set a lap time in the first session with a 1:23.821, 0.057 seconds ahead of Lithuania’s Majus Mazinas (#22). New Zealand’s Marco Manson was third in front of Poland’s Kacper Rajpold (#13) and the UAE’s Maxim Bobreshov (#32). It was also very close between the top 15 as they were covered by just under 1.5 seconds being rounded out by Marco Sammut (USA – #17)

Oiva Vettenranta from Finland was the next driver to show good pace in the final session, as the #5 posted the best time of a 1:10.251, 0.223 seconds ahead of Mazinas, followed by Rajpold in third place. Manson and Londono also hit the top five again, as the top ten, which was completed by Germany’s Maxim Becker in the #24, was covered by under a second. 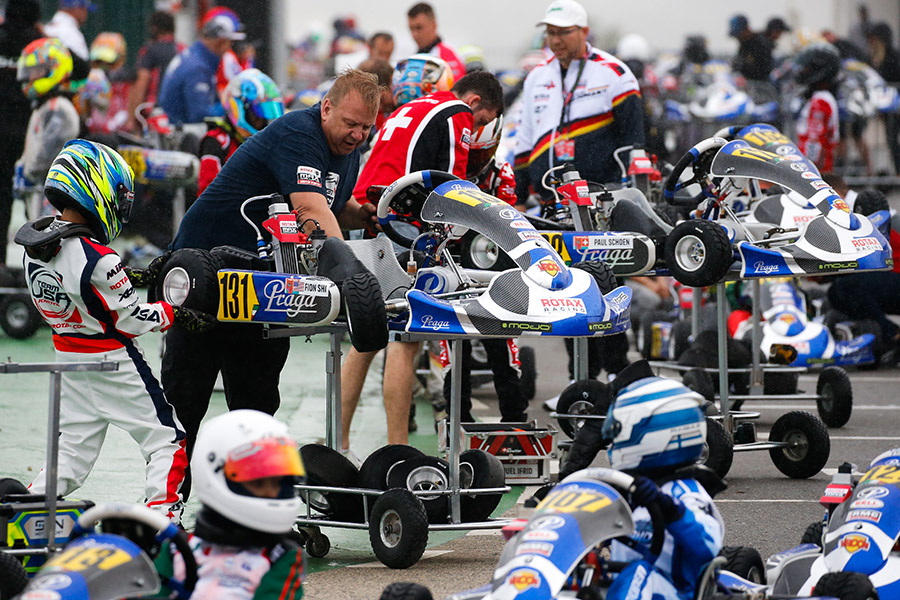 Session two for the odds saw Poland’s Aleksander Rogowski (#141) go quickest on a 1:04.610, 0.135 seconds ahead of the Netherlands’ Mats Van Rooijen (#119) as El Feghali secured third place. Poland also had the #151 of Patryk Michalik in fourth, with Boaz Maximov taking fifth place for the Netherlands in the #103 entry.

In evens for the second session of the day, the British pair of both Bartle and Ashcroft once again were the fastest out there, with the #138 quickest on a 1:04.597 by just 0.010 seconds. Pradier from France took third, ahead of the Netherlands’ Felipe Reijs (#130) and Malaysia’s Travis Teoh (#104). Two seconds covered the top 29 drivers, which was completed by Canada’s Alexis Baillargeon (#140).

France would have Luca Scelles out there as the fastest in the final session of the day for the odd numbered drivers with a 1:18.783, ahead of Great Britain’s Minns by only 0.031 seconds and Strele, who was third quickest. Finland’s Rasmus Koskinen was fourth on a 1:19.371, 0.133 seconds ahead of El Feghali.

Mini MAX will be back on track for Non-Qualifying Practice 4 at 09:56 UTC (10:56 CET) tomorrow with the odd numbered group going out first. 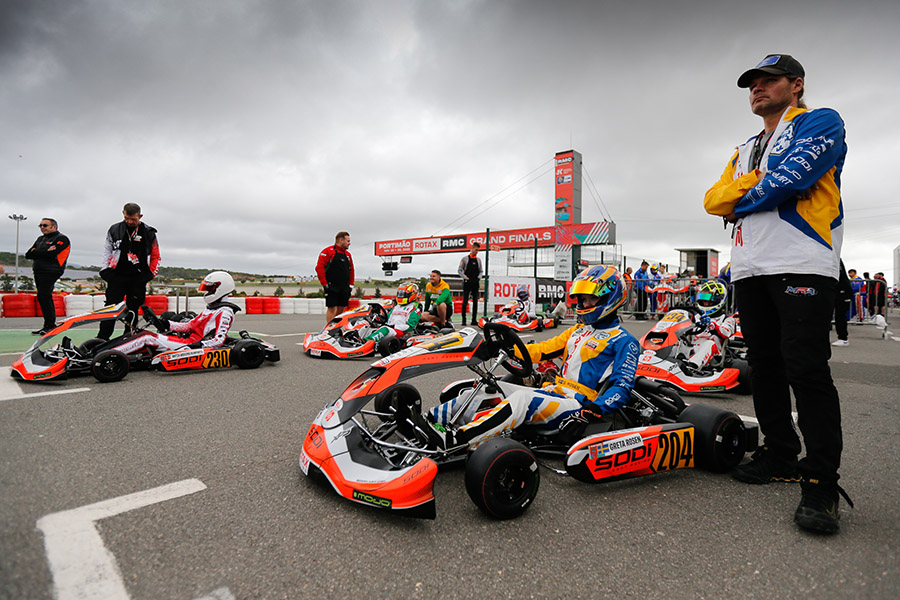 Junior MAX
The Junior MAX results for the practice sessions are provisional at this stage, pending further confirmation.

France’s Louis Iglesias (#241) would be fastest in a closely-packed first practice session for the odds, posting the fastest time of a 1:15.215, 0.077 seconds faster than Great Britain’s Ethan Jeff-Hall, whilst Kasper Schormans would round out the top three which were split by just 0.395 seconds. Maxence Bouvier (#229) made it two French drivers in the top five, placing fourth ahead of South Africa’s Klayden Ensor-Smith (#209). The top 15 drivers were just over a second apart, with Chile’s Xavier Suarez (#231) 1.054 seconds off the top time.

Carnejac was fastest in the final odds session of the day with a 1:15.593, with Jeff-Hall again being the most consistent driver of the class all day with another second place finish, 0.461 seconds slower. Latvia’s Gustavs Usakovs (#247) went third, 0.536 seconds adrift of Carnejac, followed by Vinnie Phillips (#239 – GBR) and Romania’s Eric Cristian Enache (#237).

Stepanov again would be the fastest of the even numbered drivers in the last session of the day with a 1:115.135, 0.011 seconds in front of Dion Van Werven (#272) from the Netherlands, whilst Kuwait’s Muhammad Wally secured third a further 0.030 seconds behind. Sidler was fourth ahead of Great Britain’s Noah Wolfe, where the top 13 drivers were covered by just over a second.

Junior MAX will be back on track for Non-Qualifying Practice 4 at 10:22 UTC (11:22 CET) tomorrow with the odd numbered group going out first. 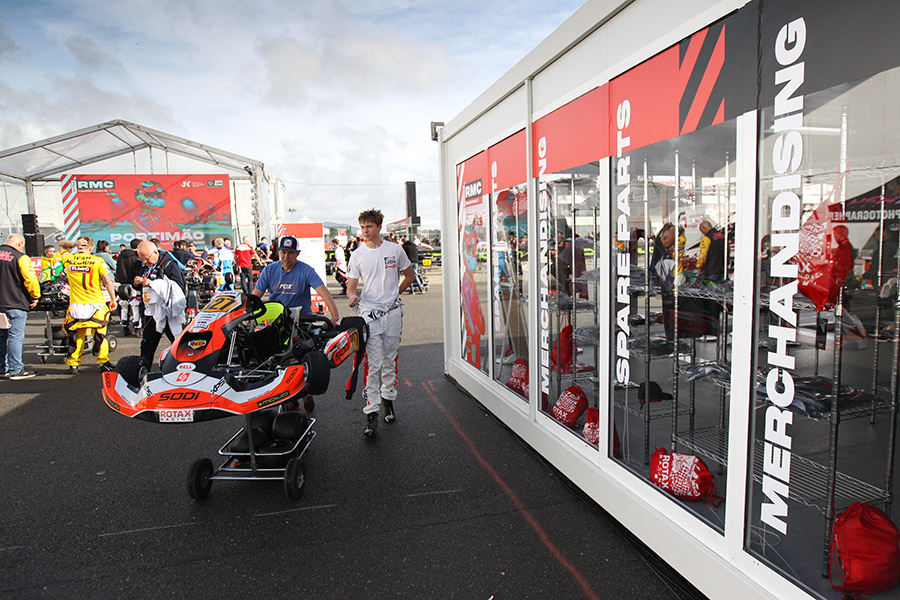 Senior MAX will be back on track for Non-Qualifying Practice 3 at 08:28 UTC (09:28 CET) tomorrow with the odd numbered group going out first.

South Africa’s Sebastian Boyd was even faster in the first session for the evens group, as the #468 posted a 59.066 second lap time, with the top four only 0.071 seconds apart. The Czech Republic’s Jakub Bezel (#456) was second, in front of France’s Hugh Croquison (#422), Portugal’s Goncalo Coutinho (#462) and South Africa’s Joseph Oelz (#406) rounding out the top five.

Axel Saarniala (#433 – Finland) was also one of several drivers in the field to get closer to the 52-second barrier, as he posted the fastest time in the final session for the odds today with a 59.177, 0.052 seconds in front of Akmens, De Ruwe, Greece’s Christos Oikonomou and Picot. This session also saw positions in the session result to be even at thousands of a second between drivers.

Petr Bezel from the Czech Republic was the fastest driver in the second session for the evens, as the #446 was 0.025 seconds in front of Great Britain’s Mark Kimber (#452) with a 59.278. Canada’s Jason Leung (#434) and France’s Antoine Barbaroux (#424) and Jakub Bezel completed the top five in a result that saw the entire field covered by just 1.148 seconds, showing the closeness of the group.

DD2 will be back on track for Non-Qualifying Practice 3 at 09:07 UTC (10:07 CET) tomorrow with the odd numbered group going out first. 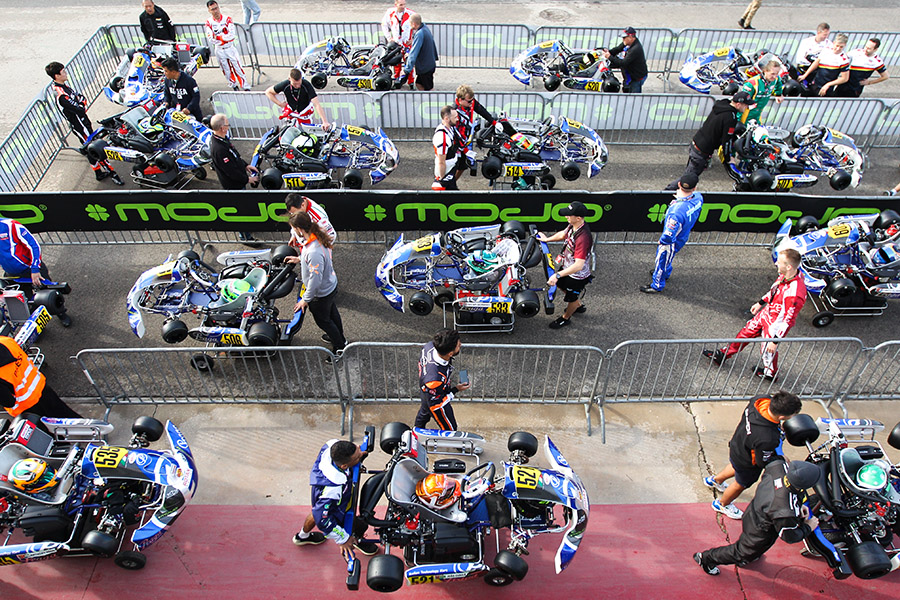 DD2 Masters
Italy’s Claudio Pagliarani (#513) was quickest in the first practice session with a 59.361, with Germany’s Denis Thum (#503) a mere 0.009 seconds behind. 11 different nations of the 60 represented this week would be at the sharp end of the timesheets, but the top 33 were within 1.763 seconds of each other. Belgium’s Fabio Kieltyka (#531), Slovakia’s Martin Konopka (#505) and Kristaps Gasparovics from Latvia (#533) completed the top five.

The second session saw South Africa’s Eugene Britz (#501) not far off the pace set in the first one with a 59.403, with Thum again second, this time 0.054 seconds off the pace. Pagliarani was third this time, in front of Kieltyka and Chile’s Horacio Torres (#520). The top 33 drivers, rounded out by Canada’s Alexandre Gauthier (#525), were covered by 1.903 seconds.