A splendid sunny day at the South Garda Karting circuit of Lonato welcomed the 304 drivers present at the second and decisive round of the WSK Final Cup, that is the closing round of season 2022. These are significant figures for the event that changed its format to two consecutive weekends this year – in Sarno and Lonato – for a total of over 500 participations coming from 48 different countries. 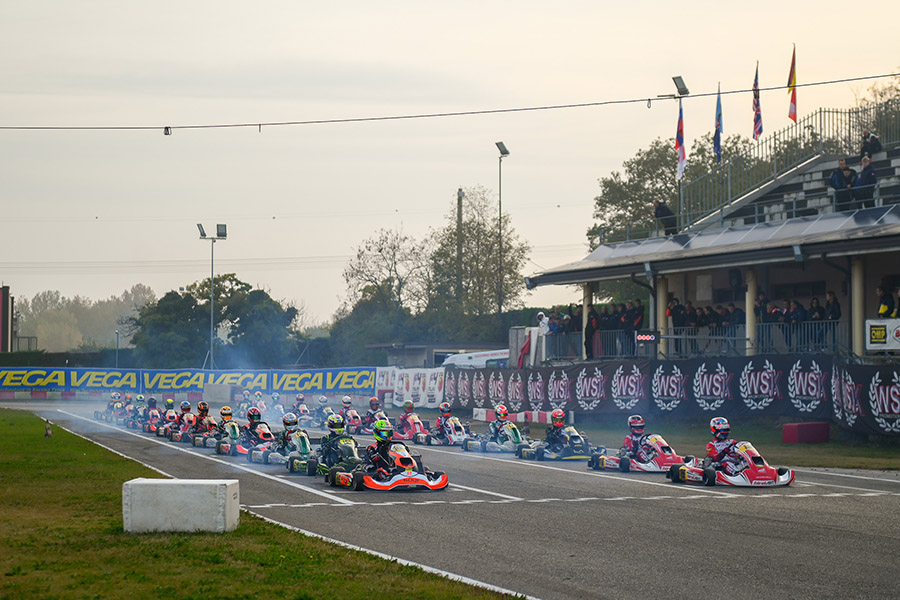 The starting list is quite interesting also for this closing act of the season with a lot of growing young talents, some of which at the debut in the higher categories ahead of the next season, and a lot of respected champions like the Brit Ben Hanley, who is now competing in motorsport but on the occasion he decided to return to karting after 4 years of absence, or some veterans like the multiple-champion Davide Forè, who is always competitive despite his 48 years of age.

The first official day started on Friday with qualifying practice. A total of 17 heats followed and 26 more are scheduled for Saturday. Prefinals will start on Sunday at 10:30 and Finals at 14:00 with Live Streaming from wsk.it and Motorsport.tv.

Qualifying practice.
KZ2 – The pole position was set by the Italian Maragliano, but the Czech driver Skrivan put in a surprising performance in Session-2.
An interesting duel started since the beginning in KZ2’s Session-1 between the two Italians Alex Maragliano (Maranello SRP/Maranello-TM Racing-Vega), who was the fastest in 45.333s, and Giuseppe Palomba (BirelART Racing/BirelART-TM Racing), who was only 0.057s shy of him. The third place was secured by the French driver Thomas Imbourg (CPB Sport/Sodikart-TM Racing) in 45.497s, who led the other young Italian Cristian Bertuca (BirelART Racing/BirelART-TM Racing) by 0.020s. Session-2 was led by the Czech driver Marek Skrivan (Sumako IPK Racing/IPK-TM Racing) in 45.384s, which was the fastest time overall between Maragliano and Palomba’s times. The fourth overall performance was put in by the winner of Sarno, Senna Van Walstijn (Sodikart/Sodikart-TM Racing), while his teammate Emilien Denner (45.578) accused a bit of delay. He has been a great protagonist in Sarno, but eventually had to retire from the Final. Ben Hanley (Drago Corse/Drago Corse-TM Racing) put in a positive performance too and was 0.155s shy of the Session-2 poleman Skrivan.

OK – A great pole position for the Dane Walther.
There were some surprising results also in OK, where the Dane David Walther (Koski Motorsport/Tony Kart-Vortex-LeCont) secured the pole position in 45.794s. He was forced to the retirement in the Final of Sarno, while the Belgian Thomas Strauven (Ricky Flynn Motorsport/LN-Vortex) was the quickest of Session-1 in 46.009s. The Chinese winner of the previous round in Sarno, Yuanpu Cui (KR Motorsport/KR-Iame), was only 24th overall in 46.240s. Anatoly Khavalkin (Parolin Motorsport/Parolin-TM Racing) was among the quickest posting the second time in Session-2 after the second place claimed in Sarno, while the Brit Nathan Tye (Sodikart/TM Racing) was second in Session-1 with a best time of 46.025s. The Brit Joe Turney (Tony Kart Racing Team/Tony Kart-Vortex) is currently third in the championship and is ready to slide in the fight for the top from P4, posted in Session-2 in 46.024s. He was proceeded by Dmitry Matveev (KR Motorsport/KR-Iame) in 45.887s.

OKJ – Ramaekers, Lehtimaki and Olivieri are the quickest.
Among the emerging names of this round of OK-Junior, the Belgian Thibaut Ramaekers (VDK Racing/KR-Iame-Vega) was the fastest of all with a lap completed in 47.265s in Session-1. He led the Romanian David Cosma-Cristofor (Ricky Flynn Motorsport/LN-Vortex) by 0.105s and his teammate Alfie Slater by 0.119s. The fastest of Session-2 was the Finn Sebastian Lehtimaki (Koski Motorsport/Tony Kart-Vortex) in 47.438s, who led Oleksandr Bondarev (Ricky Flynn/LN-Vortex) by 0.112 and the Swede Oliver Kinnmark (Koski Motorsport/Tony Kart-Vortex) by 0.131. The winner of the round in Sarno, Emanuele Olivieri (IPK Official Racing Team/IPK-TM Racing) was the fastest of Session-3 in 47.571s. The second time was posted by the German Mathilda Paatz (KR Motorsport/KR-Iame), who was 0.180s shy of the leader, while the Spanish driver Christian Costoya (Parolin Motorsport/Parolin-TM Racing) was third at +0.186s. The classification leader from Scotland Zac Drummond (Parolin Motorsport/Parolin-TM Racing) was 21st in 47.843s.

MINI – Sala is the fastest in qualifying practice.
In the four heats of MINI, the pole position went to the Italian Filippo Sala (Team Driver/KR-Iame-Vega) in 52.544s. He was one of the protagonists in Sarno where he claimed the third step of the podium. The best drivers of the other three Sessions were the Dutch Dean Hoogendoorn (Alonso Kart by Kidix/Alonso-Iame) in Session-2 (52.571s), the Turkish Iskender Zulfikari (BabyRace Driver Academy/Parolin-Iame) in Session-1 (52.667s) and the Italian Cristian Blandino (CRG Racing Team/CRG-Iame) in Session-3 (52.743s). The winner of Sarno Gianmatteo Rousseau from Panama (Alonso Kart by Kidix/Alonso-Iame) was sixth in Session-1 with a best time of 52.974s. The second-classified in Sarno, Vladimir Ivannikov (Gamoto/EKS-TM Racing) was fifth in Session-4 in 52.968s. 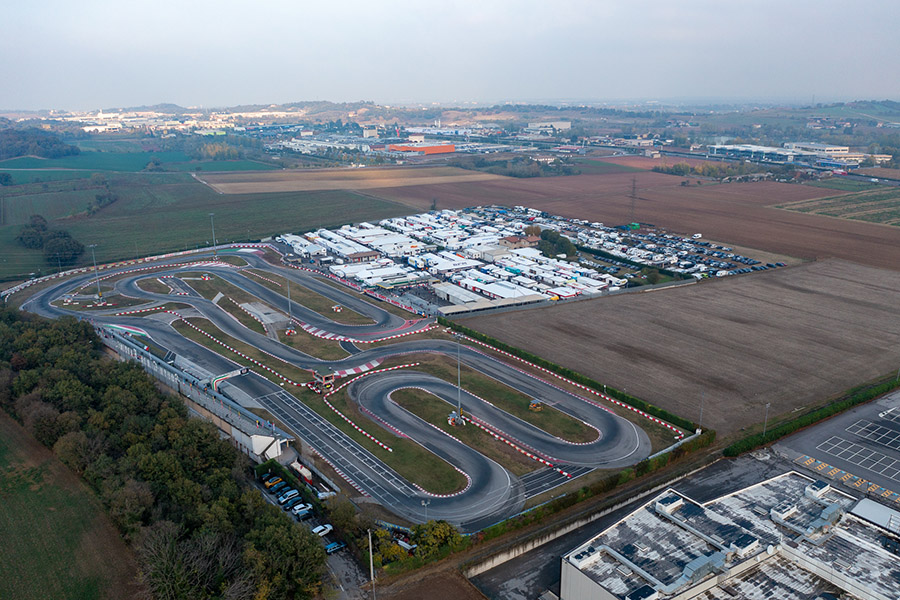 The first 17 heats.
The Italian Alex Maragliano kept his momentum in the first of the two heats of KZ2 and won from the French driver Emilien Denner. The Dutch Senna Van Walstijn had to retire from the second heat due to an engine issue when leading the race and when only one lap was left to go. Due the Dutch’s abrupt stop, Giuseppe Palomba could not avoid colliding with him and was therefore forced to the retirement. The victory went to Cristian Bertuca.
The two heats of OK were won by the Dane David Walther from Dmitry Matveev and Anatoly Khavalkin from Maksimilian Popov.
The Italian Emanuele Olivieri leads the pack of OKJ with two wins in the four races. He is followed by the Belgian Thibaut Ramaekers and a recovering Scott Zac Drummond. The other victories went to the Austrian Niklas Schaufler and the Belgian Thibaut Ramaekers.
After the 9 heats of MINI, the Italian Filippo Sala (2 wins) is leading the provisional classification, level with the Romanian Bogdan Cosma-Cristofor (3 wins) and the Australian William Calleja (2 wins). The Turkish driver Iskender Zulfikari and the Dutch Dean Hoogendoorn claimed one win each.