The Rotax MAX Challenge Euro Golden Trophy took place once again last weekend at Karting Genk in Belgium. 181 competitors from 26 nations dueled at the demanding ‘Home of Champions’ and delivered exciting racing in the alternating weather conditions. In the evening, five class winners were celebrated on the podium. In addition, three drivers were awarded their tickets for the upcoming RMC Grand Finals in Portimao, Portugal, at the last moment. 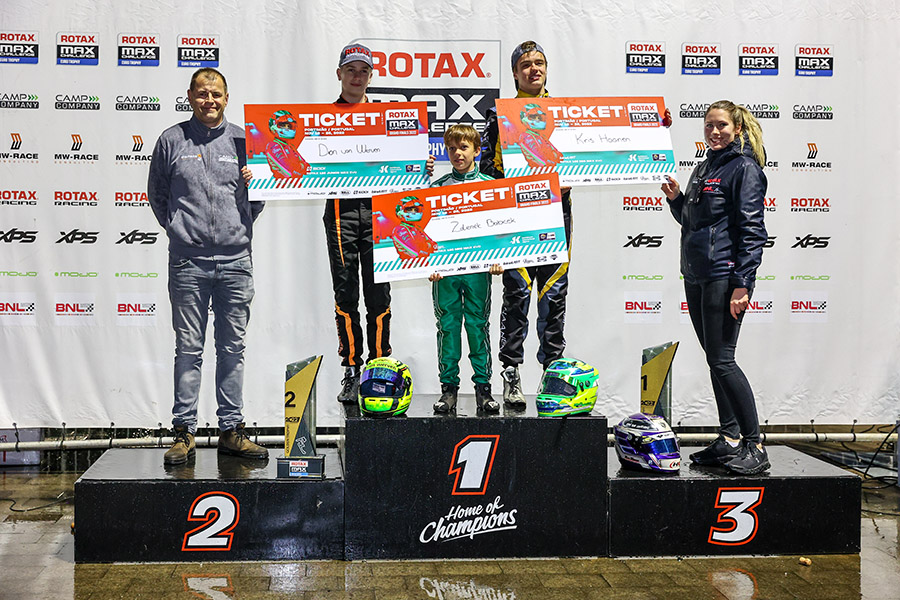 After a successful premiere of the RMC Euro Golden Trophy in the 2021 season, the one-off international event returned this year. With the race track in Genk, Belgium, the organizers opted for a proven station, which had also been an integral part of the RMC Euro Trophy racing calendar to date. At the last opportunity on the European program before the Grand Finals, the individual classes were packed to the brim. On and off the track, the event had a lot to offer. In the meantime, almost 1,000 spectators followed the events via livestream and watched the drivers in sometimes difficult conditions on the 1,360-meter-long circuit in thrilling racing action. 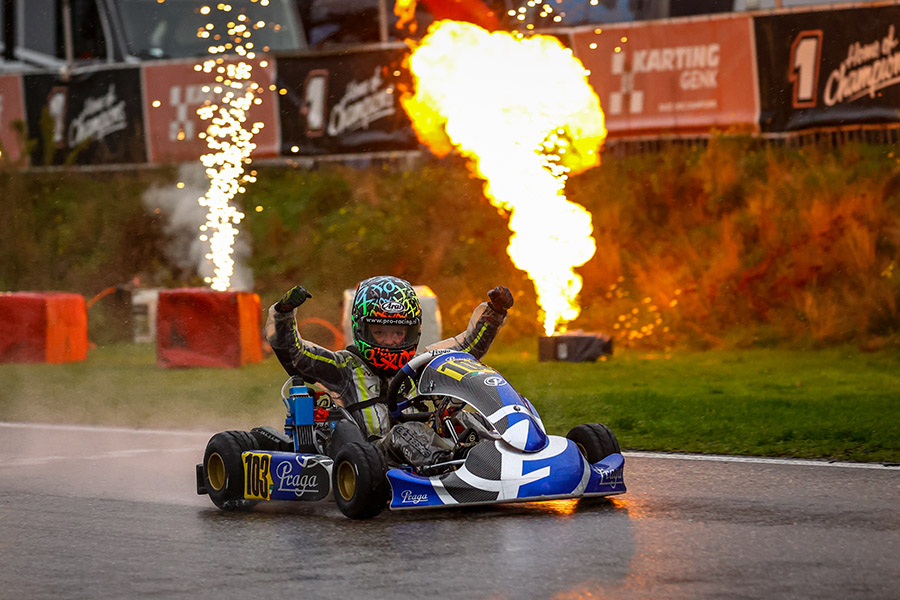 Mini MAX: Mats van Rooijen wins rain battle
In the Mini MAX class, the fastest time in qualifying went to Germany on Friday evening. Maxim Becker (C4 Racing) posted fastest lap, but had to give way to Jacob Ashcroft (Dan Holland Racing) after the heats.
The young British driver was able to implement his starting position in the pre-final in the best possible way. After a perfect start, the LN Kart driver gradually pulled away from the chasing field and celebrated a respectable victory after 13 laps. Nikita Nikishov (DH Racing) and Jakub Gasparovic (KF Racing Team) were initially on course for attack, but both fell back to the end of the field after a collision. Zdenek Babicek (TEPZ Racing Team) thus had a free run and asserted himself in the photo finish ahead of Boaz Maximov (Bouvin Power) as well as Albert Friend (SFR Motorsport) and Henry Domain (SP Motorsport).
The final caused big surprises with a change in weather in the formation lap. This saw the young racers all make the switch to MOJO rain tires before the restart. Mats van Rooijen triumphed in the slippery conditions. The Dutch driver fought his way past his opponents from sixth on the grid and finally took victory ahead of Ashcroft. Maximov finished third with Babicek and Kenzo Craigie (Argenti) completing the top five in the final. 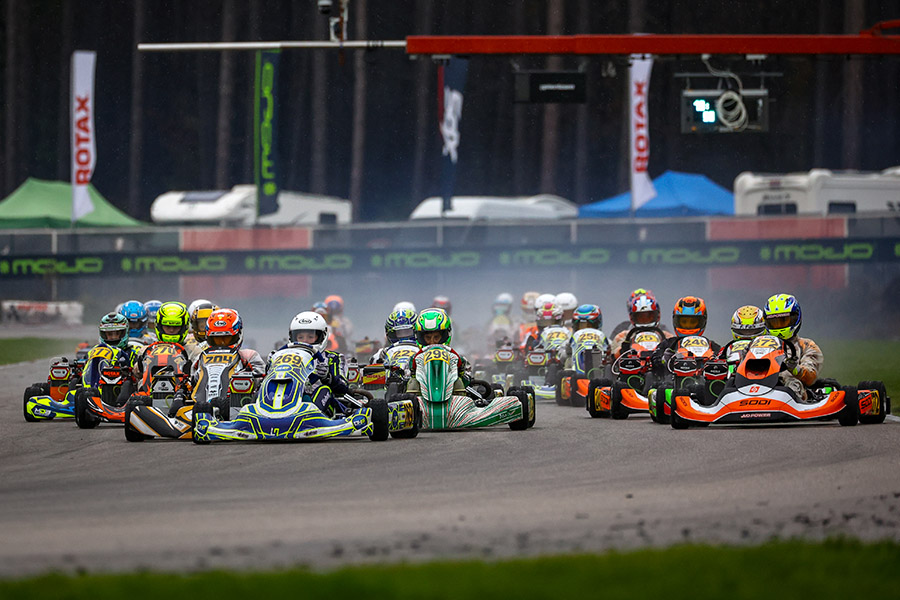 Junior MAX: Austin Lee wins dramatic final
Beau Lowette (Daems Racing Team) was the man of the hour in qualifying for the juniors under changeable weather conditions and took pole position. After the heats, however, Austin Lee (JJ Racing) moved up to the top of the standings. With two out of three possible victories, the German driver went into the races as the clear favorite and lived up to his role there.
After a perfect start, it was one of his pursuers who put himself in the limelight. Macauley Bishop (Dan Holland Racing) made the maneuver against the pole setter on the third lap and from then on had a tough dice with Lee. At the decisive moment, the British driver showed strength and narrowly took victory ahead of his rival. Gustavs Usakovs (Hunter Motorsport) and Lowette lined up as direct pursuers at the beginning, but retired from the title fight early after a collision. From then on, Enzo Bol (SP Motorsport), Felipe Falk and Mateja Radenkovic (Bouvin Power) moved up and completed the top five.
Shortly before the start of the final, the onset of rain created new conditions on the 1,360-meter-long track. Bishop pulled away considerably after the start and drove out a clear gap for the time being. In the second half of the race, the Dan Holland Racing driver lost ground and handed over the reins to Bol. The Dutch driver was ultimately happy about the victory on the track – but a time penalty threw him back to fifth place and made Lee the new winner. “What a way to end the European season. We went to the start with a chassis that was new to us in preparation for the Grand Finals. Our hard work over the past few days has paid off. The victory now gives me a massive confidence boost,” beamed the day’s winner. Dion van Werven and Bishop finished silver and bronze ahead of Kasper Schormans (JJ Racing) in fourth place. Van Werven was also excited in the evening about receiving the RMC Grand Finals 2022 ticket. 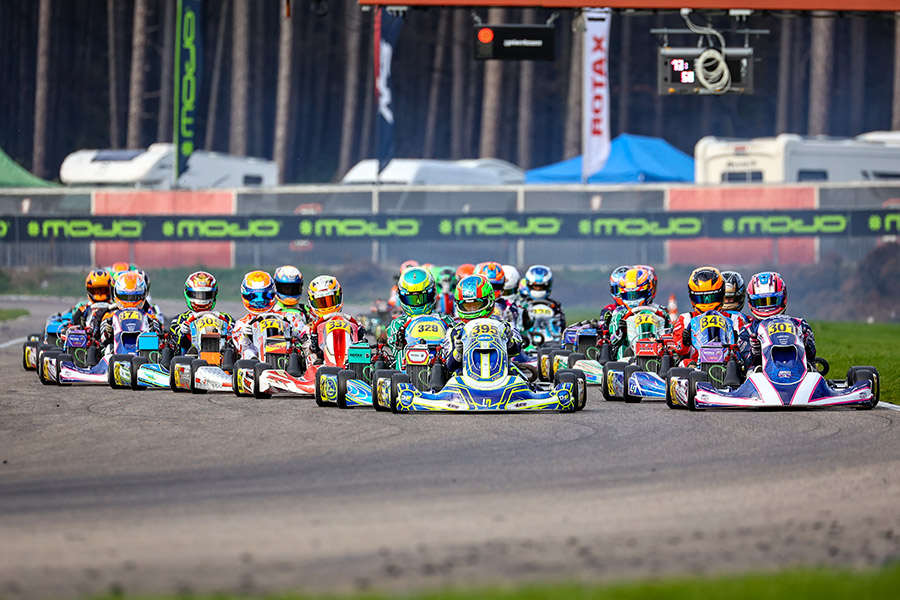 Senior MAX: Sean Butcher crowns successful season with final victory
Morgan Porter (SP Motorsport) was unstoppable in the rainy qualifying session of the 59-strong Senior MAX category. Under the most difficult conditions, the English driver proved his skills and took pole position. On a dry track, the balance of power at the front changed again. Kai Hunter (Dan Holland Racing) left no room for doubt and set the pace after three race wins. In the pre-final, the veteran held on to his advantage. Once again, Hunter delivered a perfect performance and drove to victory. In the meantime, a duel between the race winner and Mads Riis (First Racepoint) was looming. The Danish driver shortened the gap significantly at times but could not find a way past the Dan Holland representative. Sean Butcher (KR Sport) dueled behind him with Janne Stiak (Kraft Motorsport) for third place and kept the upper hand. In fifth place was Lewis Gilbert (Kraft Motorsport).
Rain in the final then played into Butcher’s hands. The reigning RMC Euro Trophy champion showed himself in his element, leading the race over the entire distance and thus snatching the deserved victory. “At the beginning of the weekend we were still lacking some pace. During each race we tested a lot and eventually found our way back to the top. Thanks to my team for their hard work”, Butcher said happily. Gilbert kept up in second place and finished on the podium ahead of Matthew Higgins (Strawberry Racing). Hunter delivered a gripping show behind them. After a collision at the start, he made it up to a strong fourth place ahead of Brandon Carr (KR Sport). 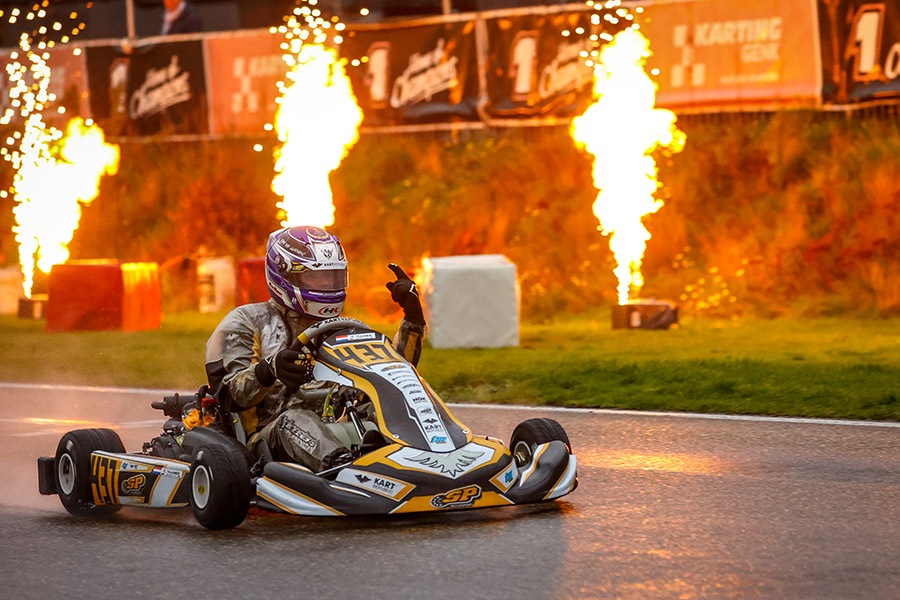 DD2: Kris Haanen wins Grand Finals ticket
RMC Euro Trophy champion Mark Kimber lived up to his reputation at the beginning of the event in the Rotax DD2. On a drying track, the British driver maneuvered his kart around the Genk circuit as the fastest of the 29-strong field and thus had the best chances for the heats. There, however, Xander Przybylak (Bouvin Power) trumped. The local hero advanced from seventh to first place three times and led the intermediate ranking. The Belgian driver also followed suit in the pre-final. From the start, Przybylak dictated the pace and held the lead. On the last lap, the Tony Kart driver got into a thrilling battle with Martijn van Leeuwen (Schepers Racing) and Mathias Bjerre Jakobsen (RS Competition), which ended in Przybylak’s favor after the checkered flag. Maxim Dirickx (Schepers Racing) finished fourth ahead of Kris Haanen (SP Motorsport).
The final was turbulent afterwards. In heavy rain, Przybylak made a good start – but Haanen quickly made himself felt on the bumper of the experienced kart driver. After a few laps, the SP Motorsport protégé took the lead and did not relinquish it until the end of the race. As the winner, the Dutch driver was elated, both about his gold cup and the ticket for the RMC Grand Finals. “In the rain I immediately felt comfortable on the track. I didn’t make any mistakes over the race distance. A huge thanks goes to my team for the great support,” Haanen said in the winner’s interview. Carl Borggaard (RS Competition) celebrated success with the fastest race time and ultimately finished second ahead of Fabian Bock (Woik Motorsport), who inherited Kimber’s position after a time penalty. The Euro Trophy champion was then classified fourth in the results, followed by Van Leeuwen in fifth place. 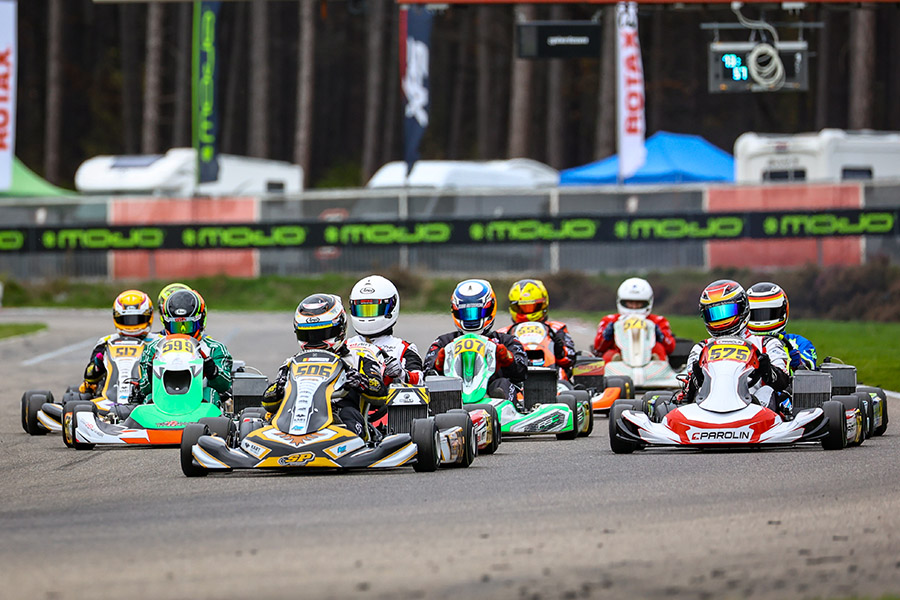 DD2 Masters: Sebastian Rumpelhardt takes superior victory
In the DD2 Masters, Martynas Tankevicius (Lenktyniu Linija) was initially the one to beat. The Lithuanian driver won qualifying and all heats to start as the clear favorite on Sunday. In the pre-final, however, a replacement in the top position promptly followed. In a thrilling duel, Carl Cleirbaut (SP Motorsport) won ahead of Sebastian Rumpelhardt (RS Competition). However, both drivers received time penalties after the race which cleared the way for Timo Haug. The German driver was confirmed the winner ahead of Michael Becker and Mykolas Mazinas (Auteks Racing).
Haug maintained his position in the first laps of the final, but could not withstand the pressure of his pursuer Rumpelhardt. The RMC Euro Trophy champion of the 2020 season drove away at the front and won in the end with more than ten seconds ahead of Haug and Becker. “Even though everything didn’t go according to plan this weekend, I was able to put it all together in the final and build on the good performances of two years ago,” Rumpelhardt said happily at the finish. Capitaine finished the event in fourth place ahead of Tankevicius in fifth.

After an exciting end to the European Rotax racing season, the focus is now on the upcoming highlight of the year. In less than two weeks, the engines will roar in Portimao, Portugal. From November 19th to 26th, more than 400 drivers from all over the world will duel for the prestigious RMC Grand Finals titles.