The opener of WSK Final Cup in Sarno

The closing phase of WSK 2022 season is about to start with the first of the two rounds of the WSK Final Cup that will take place next November 3-6 at the International Circuit Napoli of Sarno with categories MINI, OKJ, OK and KZ2 on the track. All the strongest drivers will be present among the fields of the main constructors and most qualified international teams. 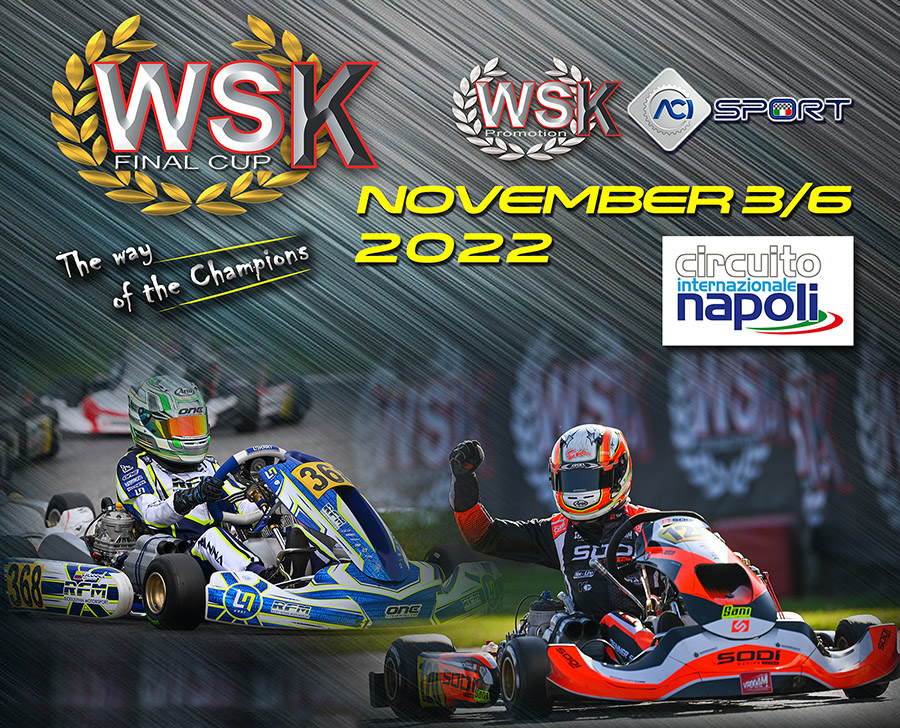 WSK Final Cup: the 11th edition in Sarno and Lonato.

This year the WSK Final Cup is going to celebrate its 11th anniversary. From the debut in 2011, the race was not ran only in 2020 due to the Covid-19 pandemic and it has always featured one single round. This year the series will  comprise two rounds, the opener in Sarno and the closer one week later in Lonato (November 10-13), and the title will go to the drivers scoring the overall highest number of points.

The program of Sarno: Live Streaming from Wsk’s website and Motorsport.tv.
After free practice on Wednesday, November 2nd, the WSK Final Cup’s round of Sarno will officially kick off on Thursday, November 3rd, with scrutineering and some more free practice. The event will continue on Friday with qualifying practice and the initial heats, that will keep drivers busy for the whole Saturday. The closing stages with Prefinals and Finals Live on wsk.it and Motorsport.tv will end the event on Sunday, November 6th.

The most important event of the season.
The WSK Final Cup not only represents the most important event of this end of the season, but it also provides a chance to drivers and teams to finish the season on a high and to test the new material ahead of the next season. Several young drivers will have an important chance to make their debut on higher categories and get acquainted with the faster karts they will be operating in 2022.

A lot of champions in the history of WSK Final Cup.
The winner of the past edition of the WSK Final Cup were the Romanian David Cosma Cristofor of Team Gulstar in MINI, the Spaniard Lucas Fluxa of KR Motorsport in OKJ, the Brit Arvid Lindblad of KR Motorsport in OK, and the Italian Francesco Celenta of Parolin Motorsport in  KZ2. The Hall of Fame of the WSK Final Cup includes several champions since the beginning, like Lorenzo Travisanutto at his debut in MINI in 2011, Nicklas Nielsen in KF3, Dennis Olsen in KF2 and Bas Lammers in KZ2. Since the first edition the list of the winners has been including big names of International karting like Callum Ilott, Robert Shwartzman, Karol Basz, Marco Ardigò, Frederik Vesti, Maya Weug, Pedro Hiltbrand and a lot more.

The program of the WSK Final Cup, Sarno: