The 50th Trofeo delle Industrie started off well with an initial spectacular qualifying at the South Garda Karting Circuit of Lonato which set the new participation record of the event with 285 drivers from 46 nations. Several duels in the heats and in the initial heats have started the event that will reach its conclusion on Sunday, October 9. The Live Streaming of the event will be available from www.trofeodelleindustrie.it. 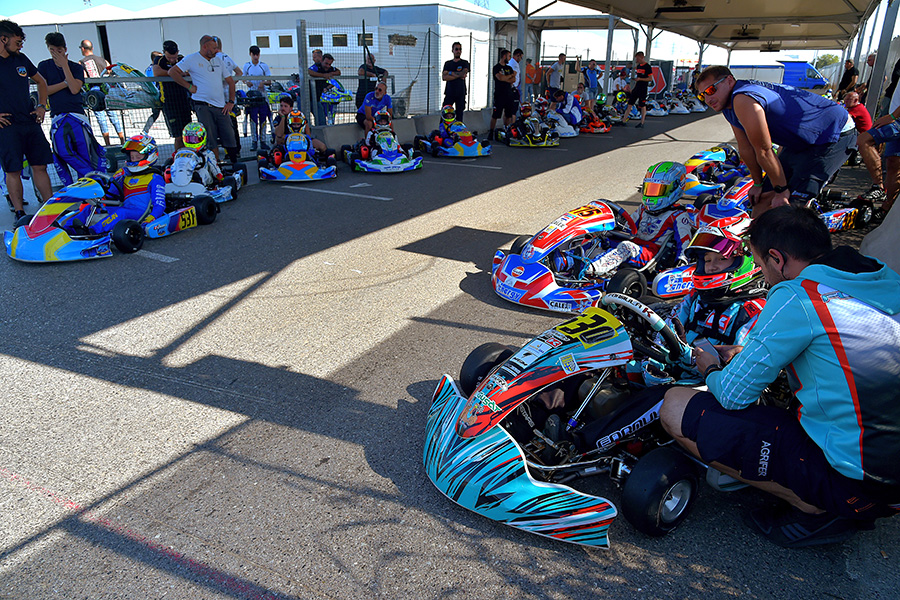 Qualifying practice
KZ2 – Pole position to Palomba in Session-1, to Leopardi in Session-2.
In KZ2 the battle has started between Giuseppe Palomba of BirelART Racing KSW and Alex Maragliano of Maranello SRP Factory Team, and the 15 years old Samuele Leopardi of Zanchi Motorsport on BirelART-TM Racing tried to slide in between them. The pole position of Session-1 was set by Palomba in 45.821s and he was followed by Maragliano by 0.024s, while Samuele Leopardi topped Session-2 in 45.943s and proceeded Matteo Zanchi by 0.030s and Alessio Piccini of Tribe One on BirelART-TM Racing by 0.040s.

OKJ – Lammers is the fastest.
The Dutch René Lammers (Parolin Motorsport/Parolin-TM Racing) posted the fastest time of OK-Junior in Session-2 (48.041s), while Session-1 was led by the Hungarian driver Martin Molnar (Energy Corse/Energy-TM Racing) in 48.091s, which was just 0.050s slower than the leader of the first session. The Chinese Zhenrui Chi (Beyond Racing Team/KR-TM Racing) also put in a great time ending Session-2 in second place, while the second time of Session-1 was set by the Romanian David Cosma-Cristofor (Ricky Flynn/LN-Vortex) in 48.174s.

MINI Gr.3 – The fastest of all is is Pancotti.
As usual, the youngsters of the MINI Gr.3 – a good lot of 95 drivers – challenged each other on the edge of the thousands of seconds. In the three qualifying sessions, the Pole Bruno Gryc (Parolin Motorsport/Parolin-TM Racing) was the fastest of Session-1 in 53.388s, Filippo Pancotti (BabyRace Driver Academy/Parolin-Iame) went quickest in Session-2, 53.083s, while the best time overall was set in Session-3 by the Dutch Dean Hoogendoorn (Alonso Kart by Kidix/Alonso Kart-Iame) in 53.158s.

X30 Junior – Apicella sets the pole position in the closing stages.
A good fight developed also in X30 Junior where Antonio Apicella on Kosmic-Iame of Team Driver, posted a 49.663s in the closing stages bettering Giacomo Maman (TB Kart/TB Kart-Iame), who was 0.055s shy of him in P2. The third place was set by Filippo Tornaghi (Zanchi Motorsport/Tony Kart-Iame) at 0.114s. The fourth by the Swede Vilmer Svahn (AD Motorsport/Energy-Iame) at 0.125s and the fifth by Davide Bottaro (Team Driver/Tony Kart-Iame) at 0.234s.

The initial heats.
The first initial heats have also been run on Friday. In KZ2, the first heat B-C went to Alex Maragliano. In MINI Gr.3, heat A-B was won by Filippo Pancotti, heat C-D by Vladimir Ivannikov, E-F by the Turkish driver Iskender Zulfikari. In X30 Senior, heat B-C was won by the Austrian Nando Weixelbaumer.

The program will continue on Saturday, October 8, with further qualifying heats. Sunday October 9, second chance races, Prefinals and Finals will close the program of the event.