The sun has been shining again at the South Garda Karting circuit of Lonato after the rain fallen on Friday. The 36 qualifying heats were regularly completed to decide the finalists of the WSK Open Cup that is underway at the South Garda Karting circuit of Lonato. The main protagonists among the 206 drivers coming from 48 different countries are all set for the final challenge that will take place on Sunday, October 2 with live Streaming from wsk.it  and Motorsport.tv starting at 10:50 for Prefinals and from 14:00 for the 4 Finals that will name the champions of the 4 categories MINI, OKJ, OK and KZ2. 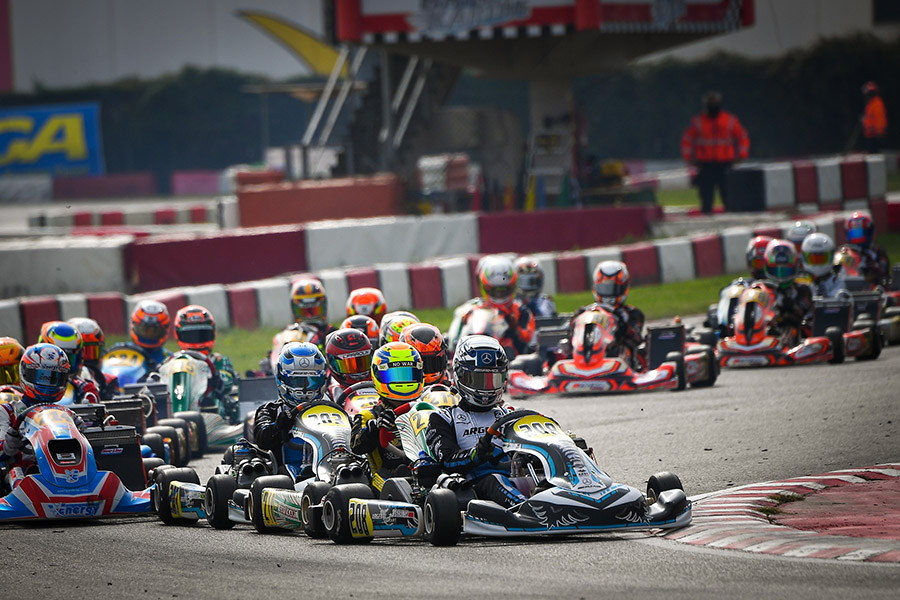 KZ2 – Denner dominates qualifying.
In KZ2 the French driver Emilien Denner (CPB Sport/Sodikart-TM Racing-Vega) dominated qualifying: he posted the fastest time in qualifying practice and claimed all the victories in the three heats run. Behind the Frenchman, the winner of editions 2019 and 2021, Giuseppe Palomba (BirelART Racing/BirelART-TM Racing) secured good results. The other strong rivals are ready for the challenge though, like the French driver Jeremy Iglesias (CRG Racing Team/CRG-TM Racing), the German David Trefilov (Maranello SRP/Maranello-TM Racing) and CRG’s Viktor Gustavsson from Sweden and Paavo Tonteri from Finland. All these drivers are ready to fight for the title together with all the other finalists that accused a bit of delay for one reason or the other.
KZ2, classification after the heats: 1. Denner penalties 0; 2. Palomba pen. 10; 3. Iglesias pen. 11; 4. Trefilov pen. 14; 5. Gustavsson pen. 18; 6. Tonteri pen. 21; 7. Stell pen. 27; 8. Putiatin pen. 28.

OK – Cui and Powell to the fore.
In the three heats of OK, the Chinese Yuanpu Cui (KR Motorsport/KR-Iame-LeCont) had the upper hand thanks to a victory and two placings, while his teammate from Finland Luka Sammalisto, after setting the pole position in qualifying practice, did not finish the first heat and was also relegated to the back in the other two. The other KR Motorsport driver from Jamaica, Alex Powell, bounced back and secured P2 after the heats. The Swede Oscar Pedersen (Ward Racing/Tony Kart-Vortex) also displayed a good shape in P3, as Anatoly Khavalkin (Parolin Motorsport/Parolin-TM Racing), who is fourth and won the third heat. The Italian Sebastiano Pavan (Forza Racing/Exprit-TM Racing) confirmed to be among the quickest taking P5 and leading the Estonian Tomass Stolcermanis (Energy Corse/Energy-TM Racing).
OK, classification after the heats: 1. Cui penalties 8; 2. Powell pen. 9; 3. Pedersen pen. 10; 4. Khavalkin pen. 12; 5. Pavan pen. 21; 6. Stolcermanis pen. 22; 7. Bianco pen. 24; 8. Walther pen. 26.

OKJ – Hanna Hernandez on top.
OKJ has been particularly interesting as 60 emerging talents made it onto the track – a lot of which at the debut in the higher category from MINI on this occasion. The fastest time was obtained by the Colombian driver Salim Hanna Hernandez (Ricky Flynn/LN-Vortex-Vega), who was followed by the German Taym Saleh (KR Motorsport/KR-Iame), both drivers with two wins each, and the Pole Maciej Gladysz (Ricky Flynn Motorsport/LN). The latter obtained the pole position on Friday and then won one heat always staying among the fastest also in the other heats. The Australian Griffin Peebles (Koski Motorsport/Tony kart-Vortex) also claimed two wins. A lot of drivers certainly have what it takes to fight for the win.
OKJ, classification after the heats: 1. Hanna Hernandez penalties 9; 2. Saleh pen. 9; 3. Gladysz pen. 10; 4. Peebles pen. 13; 5. Schaufler pen. 14; 6. Helias pen. 16; 7. Ageev 20; 8. Chi pen. 21.

MINI – Kamyab leads a bunch of very young talents.
The Brit Roman Kamyab (BabyRace/Parolin-Iame-Vega) had the upper hand among the 87 very young drivers that contested the 15 heats of MINI. He claimed 3 wins and is currently followed by the American Jack Iliffe (Parolin Motorsport/Parolin-TM Racing), who secured two wins and is equal on penalties. The Italian Filippo Sala (Team Driver/KR-Iame) recovered a lot of ground taking two wins, as his teammate from Brazil Augustus Toniolo. The Dutch Dean Hoogendoorn (Alonso Kart by Kidix/Alonso Kart-Iame), Vladimir Ivannikov (Gamoto/EKS-TM Racing), the Turkish Iskender Zulfikari (BabyRace/Parolin-Iame) and the Italian Ludovico Busso (DR/DR-TM Racing), who came to the fore in qualifying, confirmed themselves among the protagonists. The performance of the Romanian Bogdan Cosma Cristofor (BabyRace/Parolin-Iame-Vega), who obtained the pole position in qualifying practice, was affected by a DNF instead.
MINI, classification after the heats: 1. Kamyab penalties 8; 2. Iliffe pen. 8; 3. Sala pen. 10; 4. Toniolo pen. 11; 5. Hoogendoorn pen. 15; 6. Ivannikov pen. 18; 7. Zulfikari pen. 20; 8. Busso pen. 23.