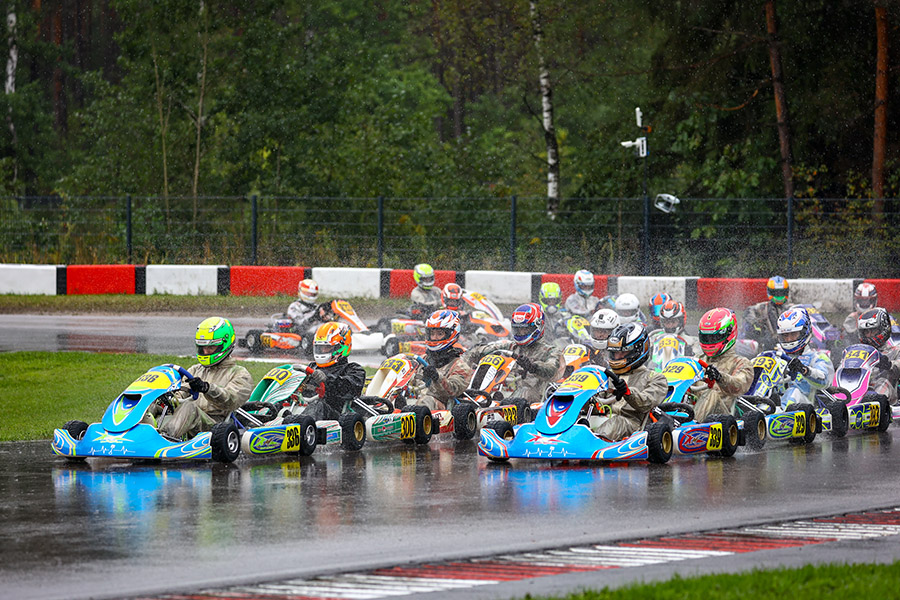 More than 100 drivers from a wide range of nations took part in the top competition on the weekend at Wackersdorf. The fourth and final stop of the RMC Euro Trophy at this well-known circuit in Germany made it exciting once again. After the kick-off in Genk, Belgium, the series moved on to Val d’Argenton in France before the first preliminary decisions were already made in July at Mariembourg, Belgium. The 1,197-meter-long circuit in Wackersdorf was dominated by the duel for the remaining titles and tickets to participate in the RMC Grand Finals in Portimão, Portugal this November. While Ethan Jeff-Hall (Strawberry Racing) had already been announced prematurely as the winner of the Junior MAX category, nothing had been decided in the other three categories at the beginning of the weekend. 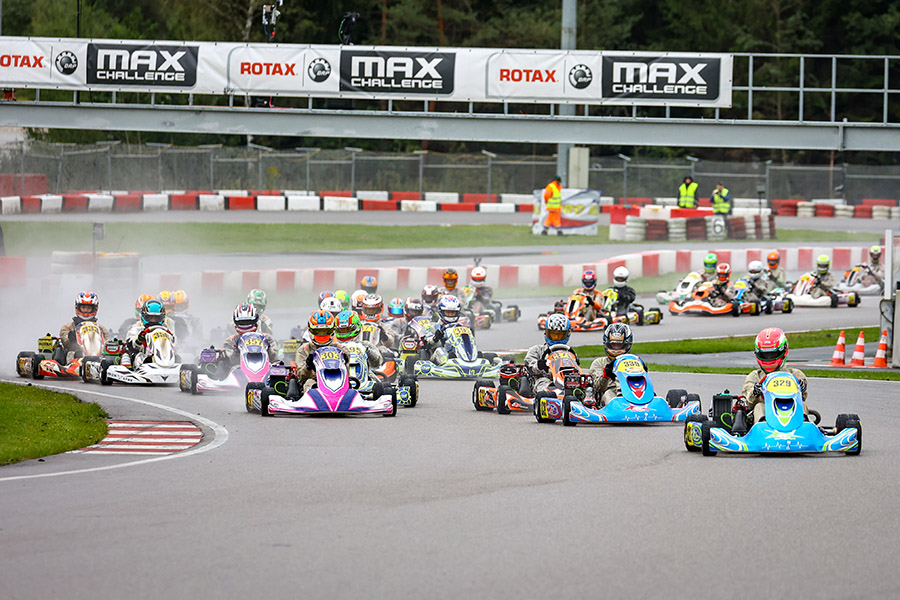 Junior MAX: Double victory for Austin Lee – Ethan Jeff-Hall receives championship trophy.
The racing action in the Junior MAX has been firmly in the hands of Ethan Jeff-Hall (Strawberry Racing) this season so far. The British driver was already crowned champion prematurely in Mariembourg which left no doubt in the fight for overall victory, and he therefore did not compete in the season finale. From then on, Austin Lee (JJ Racing) took over the reins as the weather caused chaos at Wackersdorf. In the heats, the youngster took two out of three possible victories and seamlessly continued his top performance in Sunday’s races. In both finals, the German-based driver won by a solid margin and thus clinched the deserved victory of the day.

In the first race, Leon Zelenko (JJ Racing) was soon found to be a direct pursuer of the pole-sitter. After the start, the Croatian driver sat in the slipstream of the pacesetter, followed by Tommie van der Struijs (Bouvin Power), at the front. With increasing race distance, however, Kasper Schormans (JJ Racing) put the pressure on and moved into second position. Van der Struijs crossed the finish line in third place ahead of Gustavs Usakovs (Dan Holland Racing) and Maxim Shchurko (Lenktyniu Linija).
Schormans also kept up with Lee in second place in the second race and underlined his ambitions. At the finish, a time penalty threw the Dutch driver back to fifth place and Mikkel Pedersen (JJ Racing) moved up to second. Van der Struijs was again third and crowned himself the new vice champion. Shchurko completed the top five of the last race of this season in fourth place.
Daily ranking – Junior MAX
1. Austin Lee (50 points)
2. Tommie van der Struijs (32 points)
3. Kasper Schormans (31 points)
4. Mikkel Pedersen (30 points)
5. Maxim Shchurko (24 points) 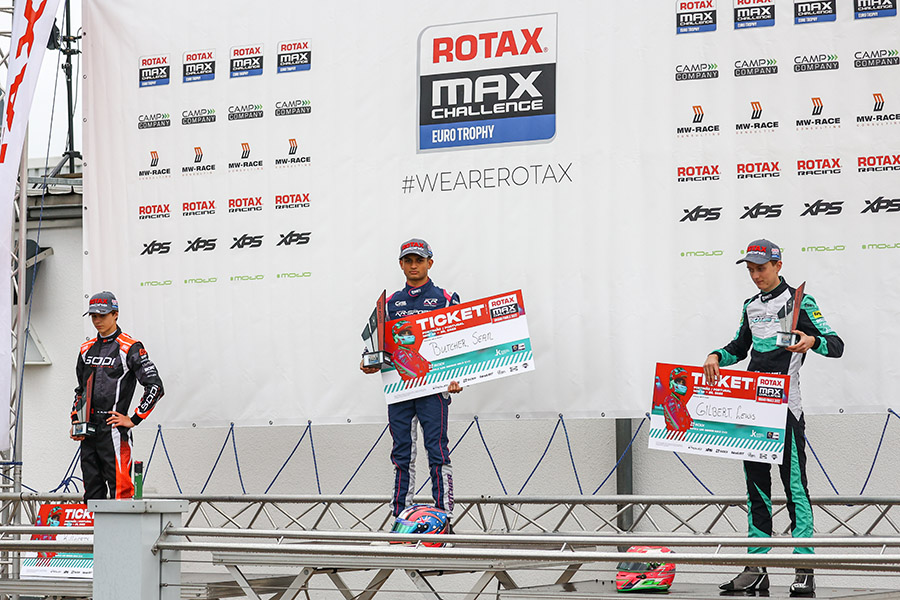 Senior MAX: Lewis Gilbert in his element – Sean Butcher takes the title
In the seniors, Sean Butcher (KR Sport) started the final race weekend of the season as the leader of the overall standings. After the qualifying, a new face showed up at the top of the classification. In dry conditions, Nevio Fischer (Kraft Motorsport) posted the absolute best time of the Prokart Raceland circuit and therefore had the best chances at the beginning. Teammate Lewis Gilbert took the upper hand as the racing progressed. The Scottish driver placed first in the intermediate ranking and followed up with a flawless start-finish victory in both races under the most difficult track conditions.
Behind Gilbert, the focus in the first race was on Butcher. The KR Sport driver put himself in the spotlight in sixth position, improved to second place and was determined to be the Senior MAX overall winner after the second to last race of the year. Kai Hunter (Dan Holland Racing) crossed the finish line in third place, followed by Janne Stiak (Kraft Motorsport) and Farin Megger (JJ Racing) in fourth and fifth place respectively.
The start to the second race was then turbulent. Butcher and Stiak left the leading group and cleared the way for a change to the top positions. Hunter quickly took on the pursuer role. The British driver finished the race in second place, but received a penalty at the finish and fell back from the top ranks. Andrej Petrovic (KSCA Sodi Europe) moved up to second place and crossed the finish line ahead of Kai Rillaerts (JJ Racing). Rillaerts impressed with strong maneuvers and made it to the runner-up title with third place in his debut season in the Seniors. Megger again confirmed his good form in fourth place and entered the result lists ahead of Alexander Abkhazava (Dan Holland Racing).
Daily ranking – Senior MAX
1. Lewis Gilbert (50 points)
2. Andrej Petrovic (31 points)
3. Kai Rillaerts (25 points)
4. Kai Hunter (25 points)
5. Farin Megger (23 points) 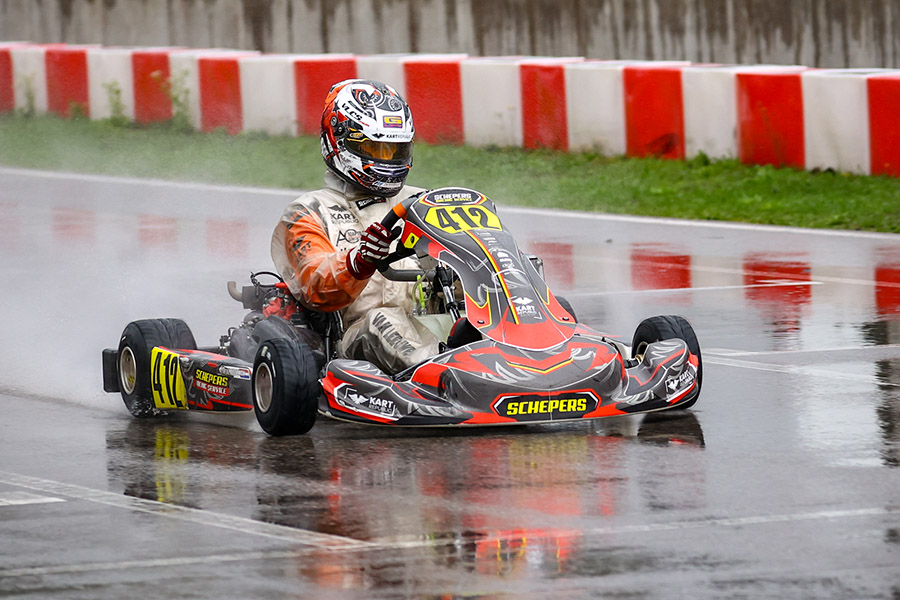 DD2: Van Leeuwen proves his strength – Mark Kimber has the edge in the end
The DD2 also showed a lot of variety on the demanding track in the Upper Palatinate. Mark Kimber (Strawberry Racing) started the race as the leader of the standings with great expectations, but had to line up behind the Finnish driver Ville Viiliaeinen (RS Competition) in qualifying. In the intermediate ranking, the Dutch flag was in first place with Martijn van Leeuwen (Schepers Racing).
For van Leeuwen it also looked like a safe victory in the first race. After the release of the race, the veteran gained a solid lead over his pursuers. However, behind him, Petr Bezel (KSCA Sodi Europe) started to attack more and more. On the last lap, the Czech driver managed the decisive maneuver, passed van Leeuwen and took the victory. Patriks Noels Locmelis (MRG Racing) finished third ahead of Stan Pex (SP Motorsport) and Mathias Bjerre Jakobsen (RS Competition) in fifth.

At the start of the second race, however, van Leeuwen took his chance again. The KR Kart driver immediately took the lead and did not give it up the entire race distance. Bezel had to admit defeat and made it over the finish line in second place. Pex moved up to third place. The duel for the entry into the top five also caused a sensation. Locmelis and Lukas Thomsen (Kartschmie.de) were both in midfield after collisions and did not spare any efforts to ensure strong catch-up chases. At the end of the 14 laps of the race, the duo lined up in positions four and five. With a view to the championship, Kimber ultimately had every reason to be happy. Despite a zero lap in the final race, the Strawberry Racing driver accepted the winner’s trophy in the championship as well as his ticket to the Grand Finals in the evening.
Daily ranking – DD2
1. Martijn van Leeuwen (45 points)
2. Petr Bezel (45 points)
3. Stan Pex (29 points)
4. Patriks Noels Locmelis (29 points)
5. Lukas Thomsen (20 points)
Championship – DD2
1. Mark Kimber (115 points)
2. Petr Bezel (105 points)
3. Martijn van Leeuwen (95 points)
4. Jakub Bezel (83 points)
5. Maxim Dirickx (66 points) 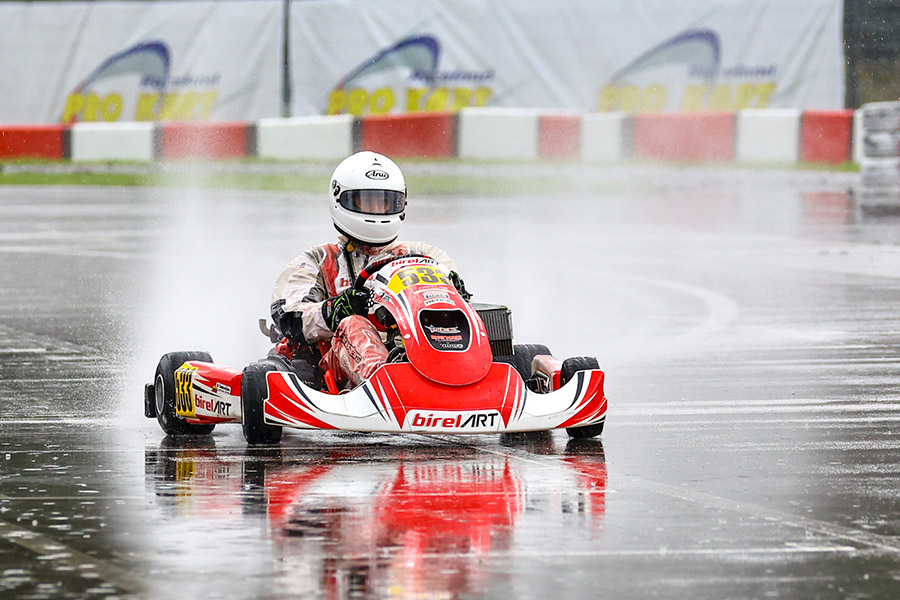 DD2 Masters: Up and down for Martynas Tankevicius – Denis Thum new champion
Martynas Tankevicius (Lenktyniu Linija) initially performed a masterpiece at the DD2 Masters. Both in qualifying on a dry track and in the heats in rainy conditions, the Lithuanian driver proved his skills flawlessly and led the field ahead of title aspirant Denis Thum (Kraft Motorsport).

Also in the Race 1, the pole-sitter stayed in first place until the checkered flag fell. Thierry de Jong (Kraft Motorsport) started several maneuvers against the veteran and even took the lead at times. Over the race distance, however, it was not enough for the Dutch driver. In the end, De Jong finished second ahead of Michael Becker and Rainer Born (Kraft Motorsport). After the race, however, an evaluation exclusion of Tankevicius led to an amendment of the classification and made De Jong the winner.
In the second race, Tankevicius made it all the clearer. From fourth on the grid, the experienced kart driver passed his opponents within a very short time and finally crossed the finish line as a safe winner. For De Jong, a second place in the race was enough for the day’s victory. Becker finished third ahead of Born in fourth place. Despite his non-participation in the last race, Thum could no longer be deprived of winning the Euro Trophy title.
Daily ranking – DD2 Masters
1. Thierry de Jong (45 points)
2. Michael Becker (36 points)
3. Rainer Born (29 points)
4. Martynas Tankevicius (25 points)
5. Denis Thum (13 points)

After the season finale of the Rotax MAX Challenge Euro Trophy, however, the 2022 racing year is not over for the most successful drivers of the top-class championship. A total of 14 tickets for the RMC Grand Finals have finally been awarded after last weekend. From November 19th to 26th, the following Euro Trophy representatives will be on the road: Boaz Maximov (Mini MAX), Thijs Stevens and Tijs Daems (Project E20 Junior), Luca Koester and Eric le Moine (Project E20 Senior), Ethan Jeff-Hall, Tommie van der Struijs and Scott Marsh (Junior MAX), Sean Butcher, Kai Rillaerts and Lewis Gilbert (Senior MAX), Mark Kimber and Petr Bezel (DD2) and Denis Thum (DD2 Masters).