Next weekend, the anniversary season of the German Kart Championship has its season finale at the Prokart Raceland Wackersdorf. In the end, 118 drivers will once again ensure full fields. In the individual predicates, no decision has yet been made in the title fight, but some favorites can already be identified. The E-Kart Race will take place for the first time as part of the supporting program. 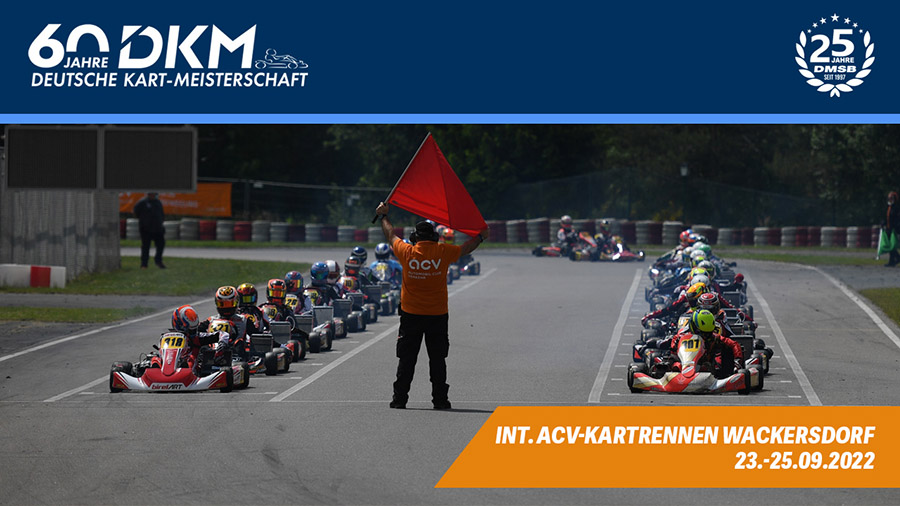 At the beginning of April, the German Kart Championship started the new season at the Erftlandring in Kerpen. At that time, snow and ice demanded a special skill from the drivers. This was followed by races in Genk (Belgium), Ampfing and Mülsen – all of which developed into a heat battle.

Double reason to celebrate – DKM and ACV celebrate their 60th anniversary
For the final, the highest German championship now goes to the Upper Palatinate, the Prokart Raceland Wackersdorf welcomes drivers from all over the world to the final races. Over the course of the weekend, there are also two reasons to celebrate. In addition to the DKM, the ACV Automobil-Club Verkehr is also celebrating its 60th anniversary and invites everyone involved to a paddock party on Saturday evening.

Everything still open in the fight for the title The spectators at the track and on the online live stream (www.kart-dm.de) can look forward to exciting karting. With Maxim Rehm (Rehm Racing) in the DKM and DSKM record champion Jorrit Pex (SP Motorsport), two drivers have already clearly set themselves apart from the pursuers in their predicate. However, both cannot sit back completely, a complete failure would turn the tide again.

On the other hand, it is much tighter in the DMSB Shifter Kart Cup: Ben Dörr (Dörr Motorsport) starts as the front-runner , but Christiaan de Kleijn (CRG Holland) is sitting close to his neck. The duo is separated by only 13 points before the final. Everything is also open with the juniors. Jens Treur (Falcon Racing Team) from the Netherlands leads the overall standings by 23 points. His first pursuer is the German driver Tom Kalender (TB Racing Team). Both youngsters have so far been able to record two race wins on their account. At the last round in Mülsen, Kalender took a double victory and thus gave a clear declaration of war in the fight for the title.

E-Kart Race starts in the supporting program
For the first time this year, the E-Kart Race will be held as part of the German Kart Championship. Drivers from the Junior, Senior and Master classes compete with uniform electric karts by the Austrian manufacturer Rotax and fight for the winner’s trophy. At the same time, the three winners will receive a ticket to the Rotax Max Challenge Grand Finals in Portimao (Portugal). From November 19th to 26th, the world’s best Rotax drivers will meet there.

All races on Saturday and Sunday in the live stream
The finale for the 118 drivers will begin in Wackersdorf on Friday. In the free practice sessions they have the opportunity to adjust to the 1,197 meter long course. From Saturday on the event will start at 10:30 a.m. with the qualifying sessions and the subsequent heats. The final races start on Sunday from 9:30 a.m. on.

Spectators are also welcome at the race track in Wackersdorf. Both race days will also be accompanied by an extensive live stream on www.kart-dm.de and www.youtube.com. For over ten years, there have been up to 16 hours of live images of each DKM race weekend. In addition, fans will receive background information on the social media channels of the German Kart Championship. All information about the race weekend can be found in the DMSB portal.