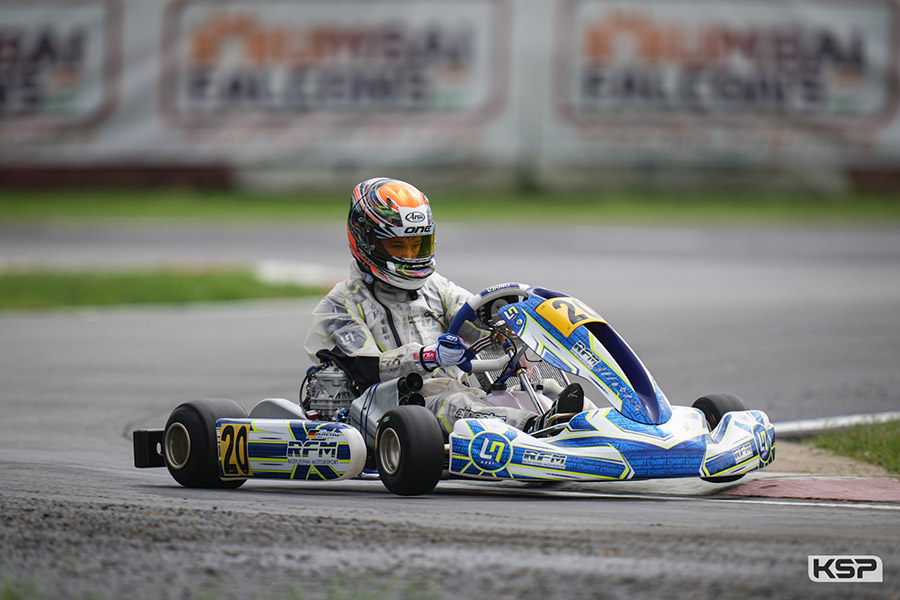 The FIA Karting World Championship – OK started this Friday morning in Sarno in rainy weather at the beginning of the day but warm at 25°. The 99 participants were divided into four groups alternating with the OK-Juniors. The track evolved progressively to dry conditions before a brief shower changed the situation until the grip returned during the fourth session contested on slicks.

Session 1: Pedersen – 1’10”614
Arthur Poulain (KR/Iame) was the quickest to get into action, then Oscar Pedersen (Tony Kart/Vortex) took the lead ahead of Tuukka Taponen (Tony Kart/Vortex) on the second lap. Poulain remained in the lead group in 2nd place on lap 3. Pedersen improved to 1’10”614 on his fourth and final lap, Zachary David closed to within five tenths of Alex Powell (KR/Iame), then Poulain was 4th and Taponen 5th. Enzo Deligny (Parolin/TM) was 8th.

Session 2: Ferreira – 1’08”329
Matheus Ferreira (Energy/TM) opened the scoring on the first lap ahead of Luka Sammalisto (KR/Iame) and Matheus Morgatto (KR/Iame). Joel Bergstrom (Exprit/TM) took over in the second lap, but Ferreira made the difference in the third lap against Sammalisto and Kiano Blum (KR/Iame). Ferreira remained the fastest in 1’08”329 on lap 4. Morgatto was 43 thousandths slower. Paolo Ippolito (KR/Iame) was 3rd at 0.151”, Akshay Bohra (Energy/TM) 4th and Sammalisto 5th.

Session 3: Popov – 1’11”525
A little rain was again wetting the track at Sarno. Ruben Moya (Pantano/Iame) led after the first lap ahead of Maksimilian Popov (Tony Kart/Vortex) and Evan Giltaire (KR/Iame). Popov improved on the lead on the second lap, with Rashid Al Dhaheri (Parolin/TM) coming 2nd. Popov increased the pace again in his third lap against Ean Eyckmans (Tony Kart/Vortex) and Moya. Popov finished with a fourth lap time of 1’11”525, more than four tenths ahead of Al Dhaheri, Arvid Lindblad (KR/Iame) came 3rd ahead of Eyckmans, Moya and Giltaire, followed by Freddie Slater (LN/Vortex) in 7th and Cristian Bertuca (Birel ART/TM) in 8th.

Session 4: Rehm – 57”047
The last session saw the MG slicks come on to the track. Tomass Stolcermanis (Energy/TM) led the first lap, followed by Arthur Rogeon (KR/Iame). Maxim Rehm (LN/Vortex) regained the lead on the second lap. Yuanpu Cui (KR/Iame) was the fastest on the third lap and confirmed on the fourth against Malo Bolliet (KR/Iame). Rehm took pole position in 57”047 on the fifth lap against Maksim Orlov (Parolin/TM) 19 thousandths further back. Cui finished 3rd by 75 thousandths, then Juho Valtanen (Tony Kart/Vortex) was 4th ahead of Stolcermanis and Bolliet 6th. Nakamura-Berta was 7th and Rogeon 8th, with Joe Turney (Tony Kart/Vortex) 11th.