Just a week after Lédenon, Alessandro Giusti repeated his performance on the Spanish circuit of Valencia by setting the two fastest laps of the Qualifying session, synonymous with pole position for Race 1 on Saturday morning and for Race 3 on Sunday morning. Already the fastest driver in Free Practice a few hours earlier, the young Frenchman did it in style, relegating Australian Hugh Barter by 7 tenths in the beautiful sunshine and high temperatures! 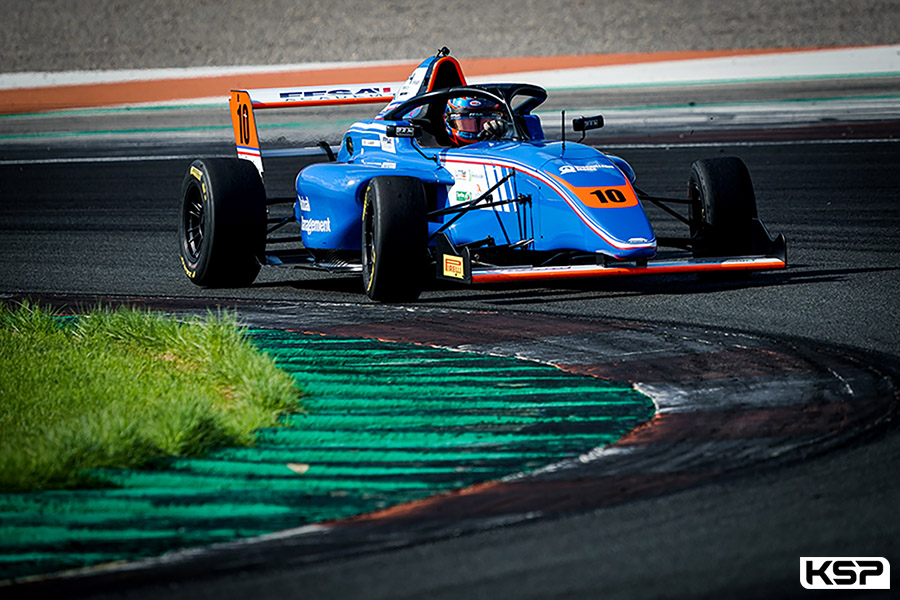 “Each circuit has its own characteristics, especially when it comes to tyre management,” analysed Alessandro. “In Valencia it was important to stay on track for a long time, because the times improved with each lap. I had already set a time of 1’34″446 on my sixth lap and I managed to run even faster three laps later, setting the final pole in 1’34″423, a little after a lap at lower speed to cool down my tyres. A double pole on this circuit that I will discover in race conditions was of course the best thing to do to aim for at least two wins this weekend and score maximum points.”

Championship leader Barter did not lose out by beating his other rivals in the overall classification, notably Japanese driver Souta Arao, twice 3rd, and Elliott Vayron, 5th and 6th. Although Swiss driver Dario Cabanelas set an excellent lap that will see him start 4th in Race 1, his 2nd best time only placed him 10th for Race 3. It must be said that several drivers set very close times. Romain Andriolo achieved his best qualification of the season, after working in this direction for several races. His performance gave him 5th and 4th positions!

After the disappointment of Lédenon, the Colombian Jeronimo Berrio finished 7th in this Qualifying session ahead of Japan’s Yuto Nomura and Enzo Richer. The latter made progress throughout the 30 minutes to reach 9th place on his 13th lap. He too had been waiting for a top 10 finish in Qualifying for some time. Behind him, Enzo Peugeot and Pablo Sarrazin set similar times, but it was Enzo who had the honour of starting first in Race 2 on the reverse grid. However, by setting two laps in the same tenth, Pablo will have the opportunity to start 7th in Race 3.