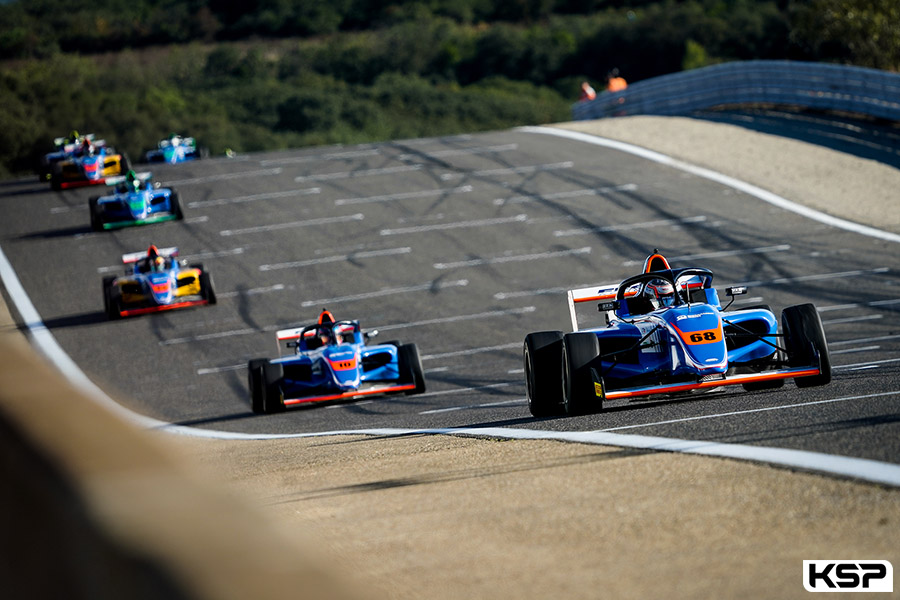 Everything was decided in the first few corners of Race 1 at the fifth round of the French Championship. Alessandro Giusti was on pole ahead of the Australian Hugh Barter, but it was Japanese driver Souta Arao who got off to a flying start and found himself neck and neck with the poleman. Finally, Barter took advantage of this duel to take the lead after this great battle. Behind the leading trio, Enzo Peugeot and Edgar Pierre were just as animated, but this caused the two protagonists to plunge to 8th and 14th places respectively.

The first lap saw Elliott Vayron emerge in 4th place ahead of Japan’s Yuto Nomura and Switzerland’s Dario Cabanelas. It was then Pierre-Alexandre Provost’s turn to retire after Peugeot’s overtaking manoeuvre. Enzo Geraci also made an excellent start to the race.

At the front, Barter remained under pressure from Giusti, both drivers being a step ahead of their competitors. On the fifth lap, another collision occurred between Enzo Peugeot and the Colombian Jeronimo Berrio, who went into a barrel roll! The driver escaped without serious injury, but he was forced to retire. The safety car returned to the track for a few laps, but the regrouping of the field and the restart did not change the order of the first four. Barter set the fastest lap in the race, and wins ahead of Giusti, Arao and Vayron. The top four drivers of the championship again dominated the battles!

At the end of the race, Cabanelas found the opening to Nomura to gain 5th place, but he was forced to give back his position to the Japanese driver after the race following a three-place penalty. Romain Andriolo was back in 7th place, but with three laps to go he was forced to retire after his duel with Peugeot. 6th at the chequered flag, Peugeot was finally penalised 30 seconds by the stewards. Enzo Geraci finished his superb performance in 6th position ahead of the German Max Reis, the Swiss Dario Cabanelas, Edgar Pierre and Leny Réveillère, who improved by ten places!