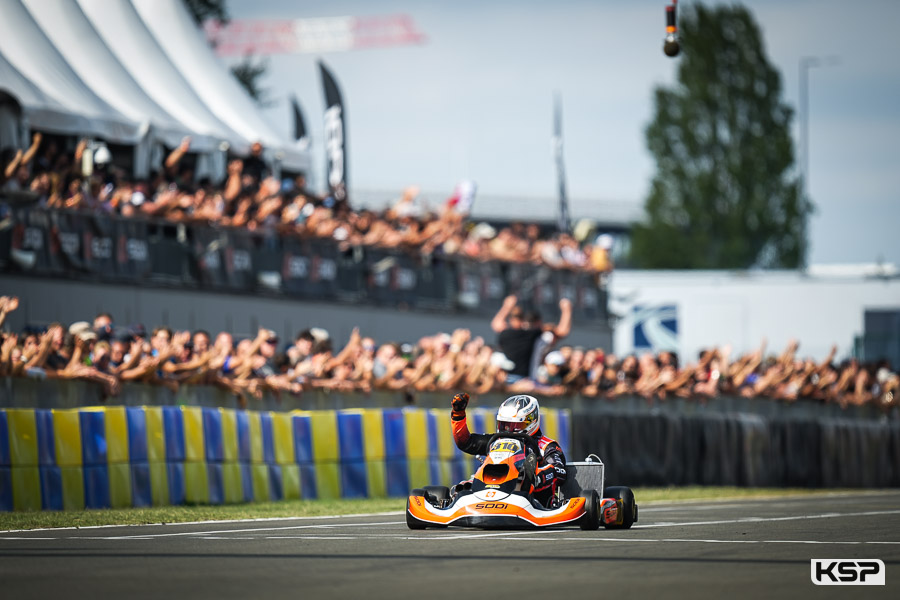 Letailleur took the lead at lights out ahead of Fiault. Fiault made a daring pass on the inside at the start of the second lap. Johan Renaux (Redspeed/TM) had made up 4 places to 12th while Davide fore’ (Birel ART/TM) fell back to 25th. In 5th position, Riccardo Nalon (Parolin/TM) was under pressure from Thierry Delré (Mach1/Modena). Letailleur took over the lead on lap 7, Bos and Fiault got together and Ramon moved up to second. Nick de Bruijn (Falcon/Iame) moved up to 7th position. Bos and Fiault made contact again. The Dutchman kept his 3rd place, but the Frenchman retired. Renaux reached 8th place ahead of Paul David (Birel ART/TM). Letailleur had more than 1.5 seconds on Ramon at the halfway point. Fore’ had moved up to 16th. Although under investigation, Bos was threatening Ramon’s 2nd place. In 11th place, after a gain of 10 positions, Adam Maatougui (CRG/TM) was under threat from Fore’. Delré finally managed to overtake Nalon for 4th place. Letailleur won the FIA Karting Masters International Super Cup – KZ2 by a masterful 2.9″. Ramon controlled Bos to secure 2nd place while the Dutchman was later disqualified for his bad manoeuvre on Fiault. Delré finished 3rd ahead of Nalon and Renaux moved up 11 places to 5th. De Bruijn finished 7th ahead of David. Fore’ had come back to 11th with the best time after a 14-place climb, but was 13th because of a badly positioned spoiler.