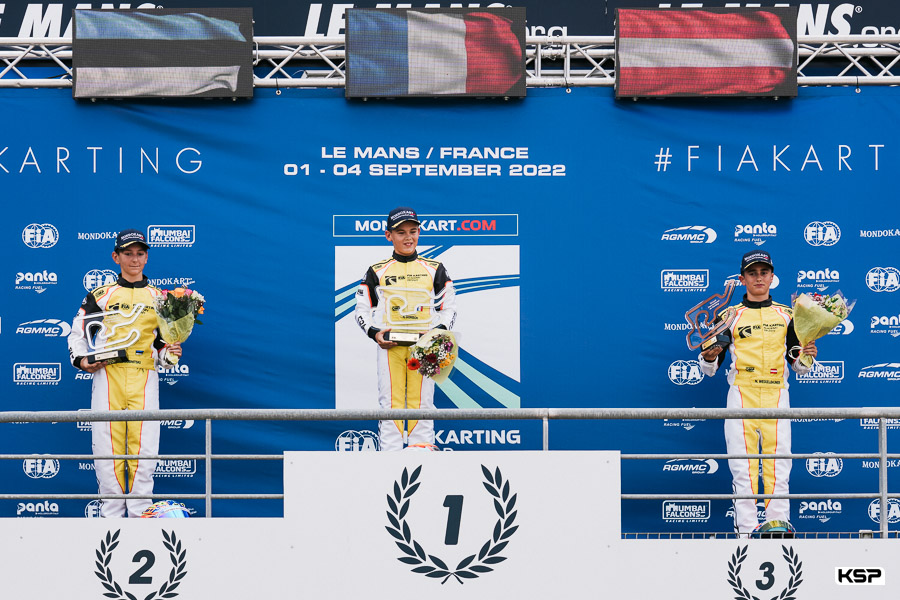 Mark Dubnitski (EST) maintained his lead at the start of the FIA Karting Academy Trophy Final, while Nando Weixelbaumer (AUT) was second ahead of Nikolas Roos (ZAF), Iwo Beszterda (POL) and Henry Joslyn (GBR). Weixelbaumer overtook Dubnitski on the fourth lap and took control of the race, while Roos dropped out on the next lap. Arthur Dorison (FRA) started well from 12th place and came back to 7th behind Guillaume Bouzar (LUX) who was still leader of the ranking. In 20th place, Matias Orjuela set the best time of the moment, soon followed by Dorison who moved up to 4th place after having passed Bouzar. Jindrich Pešl (CZE) had regained 16 places by taking 5th shortly before the halfway point. Dorison was gradually closing the gap of more than 2” on Beszterda with a series of fastest laps. It was very close at the front between Weixelbaumer and Dubnitski. On the 11th of the 19 laps, Dorison attacked Beszterda to enter the top three. He was 8 tenths behind the leading duo. The French fans were starting to think about a French success. Orjuela retired after a collision. Dorison continued to climb like a rocket and passed Dubnitski in 2nd place at the end of the 13th lap. He had then regained the lead. But Dorison did not intend to stop there. His target was Weixelbaumer, the leader 6 tenths ahead. The Frenchman dived on the inside of the chicane on lap 15 and took over the lead from Weixelbaumer. Dorison won with the fastest time after a climb of 11 places 0.480” ahead of Dubnitski. He secured the first French victory in the Academy Trophy. Weixelbaumer finished 3rd while Pešl took 4th position after a 17 place climb. Beszterda completed the top five ahead of Bouzar and Aleksandar Bogunovic (SVN).