The first event of the WSK Super Cup by MINI is underway at the International Circuit La Conca for this appointment reserved to the youngsters of the MINI that have contested qualifying practice and the initial heats so far. The event turned out to be very interesting with the participation of the most promising protagonists coming from 25 countries among the fields of the most qualified teams. 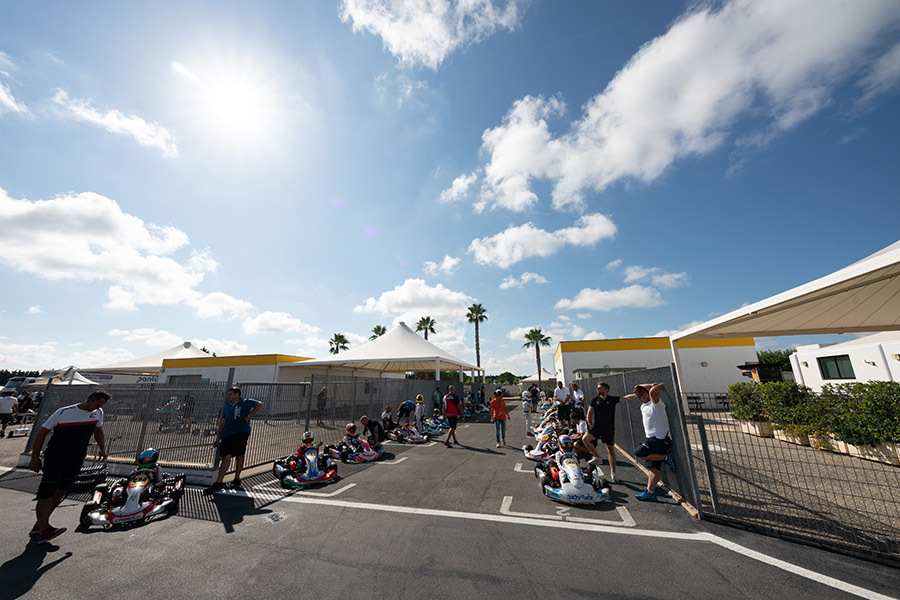 Busso, Sala and Hoogendoorn are the fastest in qualifying practice.
In the three qualifying sessions the Italian Ludovico Busso of team DR on DR-TM Racing posted the fastest time overall in Session-3 (56.862s). He was followed by the Italian Filippo Sala of Team Driver on KR-Iame. He was the fastest of session 2 in 57.708s, and the Dutch Dean Hoogendoorn of Alonso Kart by Kidix on Alonso Kart-Iame went quickest in session-1 (58.515s).
In session-1, behind Dean Hoogendoorn, the Italian Paolo Tizzano (DK Racing/Parolin-Iame) was 0.097s off the pace, while Panama’s Gianmatteo Rousseau (Alonso Kart by Kidix/Alonso Kart-Iame) was 0.277s shy of the lead. In Session-2, Filippo Sala led his rivals, the first of which was the Hungarian Gaspar Benett (IPK Official Racing Team/IPK-TM Racing) at 0.407s and Ukraine’s Olekasndr Legenkyi (Team Driver/KR-Iame) at 0.454s. In Session-3, after the overall poleman, Ludovico Busso, the Spanish driver Christian Costoya (Parolin Motorsport/Parolin-Tm Racing) was 0.193s off the pace and the British driver Max Endacott (BabyRace Driver Academy/Parolin-Iame) was 0.661s short of the lead.

The duel for the lead in the heats is between Sala and Martinese.
The first 12 heats on Friday named the main protagonists of the event and the Italian Filippo Sala (Team Driver/KR-Iame) came to the fore taking 4 wins in four heats. Home hero Iacopo Martinese (BabyRace Driver Academy/Parolin-Iame) also had a solid day and completed several recovers taking 3 wins and a second place after a sixth time in Session-1. The Brazilian Augustus Toniolo (Team Driver/KR-Iame) was also among the fastest and recovered up to provisional P3. The poleman Ludovico Busso (Team DR/DR-TM Racing) is lagging a bit behind and had to settle for several placings. The Dutch Dean Hoogendoorn (Alonso Kart by Kidix/ Alonso Kart-Iame) secured one win, one second and a third place, but his overall result was badly affected by the ninth place in the second heat. The Spanish driver Christian Costoya (Parolin Motorsport/Parolin-Tm Racing) is also a bit behind as he did not finish the closing heat after taking two wins and a second place that provisionally placed him high up in the standings. The American Keelan Harvick (Alonso Kart by Kidix/Alonso Kart-Iame) was among the heats winners too.

WSK 2023: redefinition of the calendar and confirmation of partners