The WSK Euro Series ended at the International Circuit Napoli of Sarno with a good participation. In total, considering the weekend of July 17 in Lonato and this weekend in Sarno, the participation has been of around 500 drivers coming from 52 different countries. On the track, categories KZ2, OK, OKJ and MINI produced a very high-level spectacle with a lot of drivers fighting for the victory among the fields of the official makes and the strongest international teams. 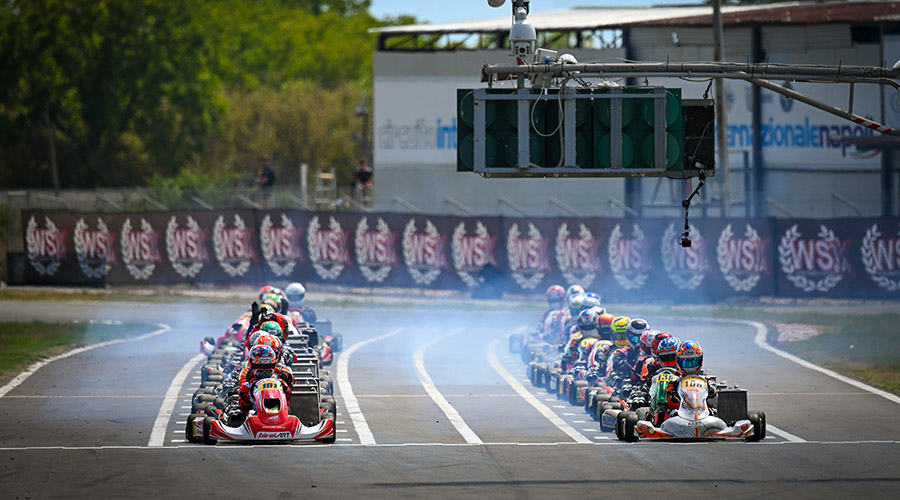 THE PREFINALS.
After qualifying heats on Friday and Saturday, the final stages on Sunday started with Prefinals of each category.
In the KZ2 Prefinal, the Italian Danilo Albanese (KR Motorsport/KR-Iame-LeCont) had the upper hand after the initial domination of the weekend by Giuseppe Palomba (BirelART Racing/BirelART-TM Racing).
Prefinal-A of OK was won by the French Enzo Deligny (Parolin Motorsport/Parolin-TM Racing-MG), while the victory of Prefinal-B went to classification leader from Japan Kean Nakamura-Berta (KR Motorsport/KR-Iame).
The victory of Prefinal-A of OK Junior went to the Pole Maciej Gladysz (Ricky Flynn/LN-Vortex-Vega), who already was on top after the heats, while his fellow-countryman and classification leader Jan Przyrowski (Tony Kart Racing Team/Tony Kart-Vortex) won Prefinal-B.
In MINI, the Italian Iacopo Martinese (BabyRace Driver Academy/Parolin-Iame-Vega) won Prefinal-A, while the spectacular sprint to the line of Prefinal-B was won by the Spaniard Christian Costoya (Parolin Motorsport/Parolin-TM Racing).

OK-Junior – Gladysz wins the duel for the Final, but Przyrowski secures the title.
The duel that has been on for most of the weekend between the Poles Maciej Gladysz (Ricky Flynn/LN-Vortex-Vega) and classification leader Jan Przyrowski (Tony Kart Racing Team/Tony Kart-Vortex) continued also in the Final. Gladysz did not have many problems winning the race, while Przyrowski managed the situation ending behind his fellow-countryman but with the certainty of claiming the title. The podium of the Final was rounded off by Nathan Tye (Sodikart/Sodikart-TM Racing), who completed a successful overtaking move on the German Simon Rechenmacher (TB Racing Team/KR-Iame) in the closing lap. The fifth place went to another protagonist of the weekend: Anatoly Khavalkin (Parolin Motorsport/Parolin-TM Racing).
Final OKJ
Maciej Gladysz (POL)
Jan Przyrowski (POL)
Nathan Tye (GBR)
WSK Euro Series – OKJ Final Classification
Jan Przyrowski (POL) points 178
Maciej Gladysz (POL) points 116
Kirill Kutskov points 66

MINI – Martinese wins the sprint to the line of the final and takes the title.
The Final of MINI ended at the sprint after a good duel involving the two main actors of the weekend of Sarno that shared the success in the Prefinals: the Italian Iacopo Martinese (BabyRace Driver Academy/Parolin-Iame-Vega) and the Spaniard Christian Costoya (Parolin Motorsport/Parolin-TM Racing), who won the title last year. The Final, and the championship, were won by Martinese, who pipped Costoya by 0.010s at the flag. The podium of the Final also included Filippo Sala (Team Driver/KR-Iame), who deservedly secured P3, while Vladimir Ivannikov (Gamoto/EKS-TM Racing) was fourth, claiming a result that allowed him to end third in the championship. Filippo Pancotti (BabyRace/Parolin-Iame) ended with a good P5.
Final MINI
Iacopo Martinese (ITA)
Christian Costoya (ESP)
Filippo sala (ITA)
WSK Euro Series – MINI Final Classification
Iacopo Martinese (ITA) points 144
Christian Costoya (ESP) points 113
Vladimir Ivannikov points 110

THE NEXT ROUND. The first edition of the WSK Super Cup by MINI will take place on September 3 at the La Conca circuit of Muro Leccese (Lecce).