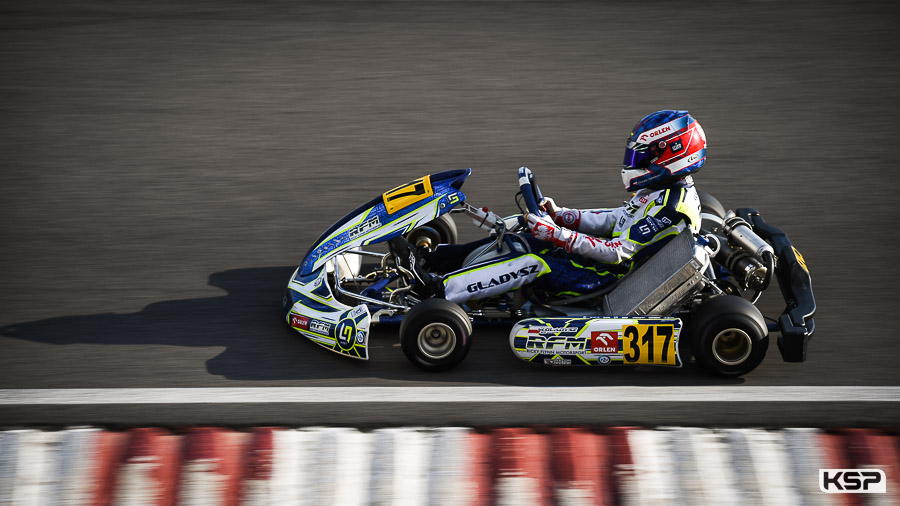 There was fine weather in Sarno at almost 30° for the OK-Junior Prefinals of the WSK Euro Series.

Maciej Gladysz (LN/Vortex) led the Prefinal A ahead of Kirill Kutskov (Birel ART/TM) and Simon Reichenmacher (KR/Iame). For his WSK debut, Leo Robinson (LN/Vortex) was on a good pace in 4th position, followed by Nathan Tye (Sodi/TM). Gladysz and Kutskov were clearly ahead of Reichenmacher as the gaps increased. Gladysz was the logical winner. Robinson secured 4th place ahead of Tye. Reno Francot (Birel ART/TM) had moved up from 19th to 8th place. Jimmy Helias (Tony Kart/Vortex) finished 12th, Andy Consani (Sodi/TM) lost 12 places to 21st, just ahead of Arthur Dorison (Tony Kart/Vortex) and Andrea Dupe (Sodi/TM) +11 places. Sacha Avril (Tony Kart/Vortex) did not finish the race.

Maxens Verbrugge (KR/Iame) followed Jan Przyrowski (Tony Kart/Vortex) at the start of Prefinal B. Anatholy Khavalkin (Parolin/TM) was 3rd, followed by Dmitry Matveev (Tony Kart/Vortex) and Nikolas Roos (CRG/TM). Verbrugge attacked Przyrowski and took the lead. At the halfway point, Khavalkin had taken the lead from Przyrowski and Matveev while Verbrugge was 5th. The battle for 1st place continued with several changes of leader in the leading trio. Przyrowski distanced himself in the last laps and took the win ahead of Khavalkin, Matveev 3rd, Verbrugge 4th and Roos 5th. Mathilda Paatz (KR/Iame) had gained 21 places to finish in the top 10.