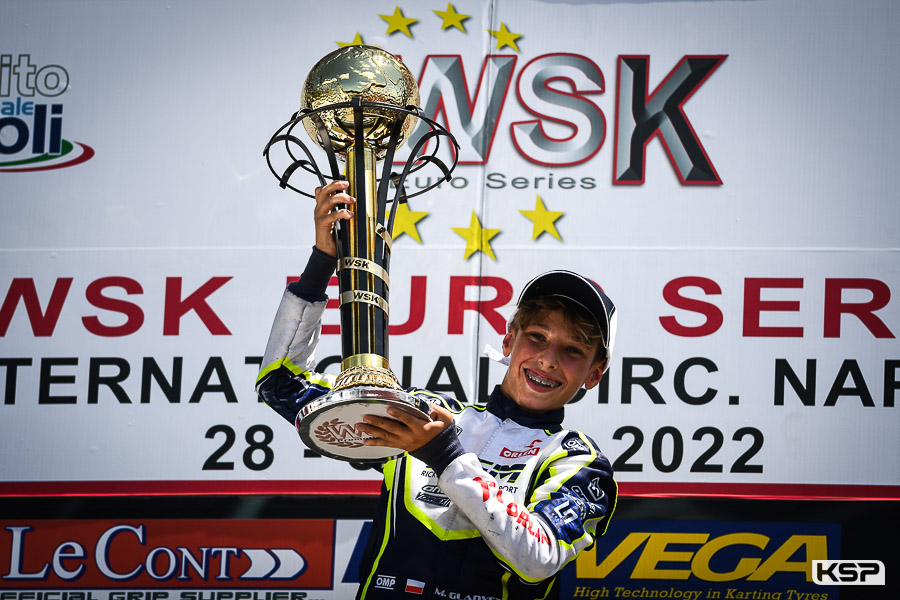 Maciej Gladysz (LN/Vortex) and Jan Przyrowski (Tony Kart/Vortex) shared the first place on the starting grid of the OK-Junior Final of the WSK Euro Series in Sarno. On the first lap, Dmitry Matveev (Tony Kart/Vortex) was 2nd behind Gladysz with Kirill Kutskov (Birel ART/TM) 4th and Anatholy Khavalkin (Parolin/TM) 5th. Nathan Tye (Sodi/TM) had dropped three places to 7th followed by Maxens Verbrugge (KR/Iame). Simon Reichenmacher (KR/Iame) was 3rd after Matveev and Kutskov crashed. Tye and Verbrugge were fighting for 5th position. In the lead, Gladysz increased his lead over Przyrowski while Verbrugge dropped back to 9th. Andy Consani (Sodi/TM) received a black flag and went in. Reichenmacher was closing in on Przyrowski’s 2nd place, but Tye was back in 3rd under the chequered flag. Gladysz won 1.4″ ahead of Przyrowski. Reichenmacher finished 4th ahead of Khavalkin. Verbrugge took 8th place, Jimmy Helias (Tony Kart/Vortex) was 11th.