All set for the final stages of the WSK Euro Series 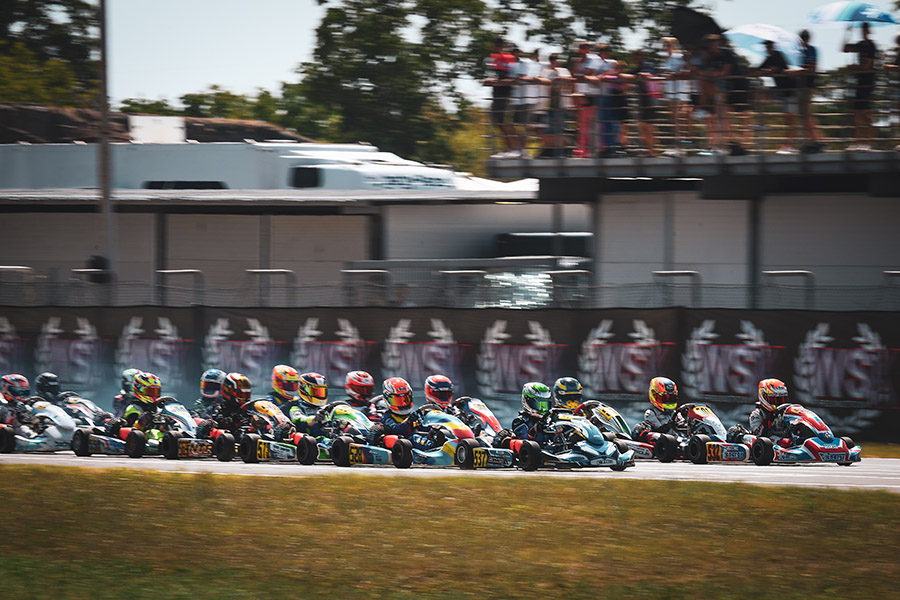 The renewed International Circuit Napoli of Sarno (Salerno) highlighted once again the competitiveness of about 240 drivers present at the second and closing round of the series. The challenge has been highly spectacular despite the very hot temperatures. Qualifying heats on Saturday contributed to the selection of the main protagonists and now all is set for the final stages that will take place on Sunday, July 31 when the KZ2, OK, OKJ and MINI titles will be awarded. The racing action will be available in Live Streaming from the websites wsk.it and Motorsport.tv.

KZ2 – Palomba dominates the scene.
In KZ2 the winner of the opening round of Lonato, the Italian Giuseppe Palomba (BirelART Racing/BirelART-TM Racing-LeCont) dominated the first half of the weekend of Sarno. He claimed the pole position in qualifying practice and secured 3 wins in as many heats run. The main rival so far is Danilo Albanese (KR Motorsport/KR-Iame), but the Finn Paavo Tonteri (CRG Racing Team/CRG-TM Racing) and the Swede Noah Milell (Tony Kart Racing Team/Tony Kart-Vortex), that were respectively second and third in the closing heat on Saturday, have what it takes to challenge for the win.
Classification after the heats: Palomba pen. 0; 2. Albanese pen. 8; 3. Milell pen. 11; 4. Tonteri pen. 13; 5. Vasile pen. 16; 6. Renaudin pen. 19; 7. Leuillet pen. 26; 8. Carbonnel pen. 28.

OKJ – Gladysz takes the lead.
In OKJ the Pole Maciej Gladysz (Ricky Flynn/LN-Vortex-Vega) took the lead, but the classification leader Jan Przyrowski (Tony Kart Racing Team/Tony Kart-Vortex) bounced back from the seventh place in qualifying and installed himself in P2 after the qualifying heats. The Brit Nathan Tye (Sodikart/Sodikart-TM Racing) and Dmitry Matveev (Koski Motorsport/Tony Kart-Vortex) were also among the quickest. Anatoly Khavalkin (Parolin Motorsport/Parolin-TM Racing) scored four wins in the heats, but he is only eighth due to a DNF.
Classification after the heats: 1. Gladysz pen. 12; 2. Przrowski pen. 13; 3. Tye pen. 17; 4. Matveev pen. 18; 5. Kutskov pen. 20; 6. Bouzar pen. 22; 7. Rechenmacher pen. 24; 8. Khavalkin pen. 25.