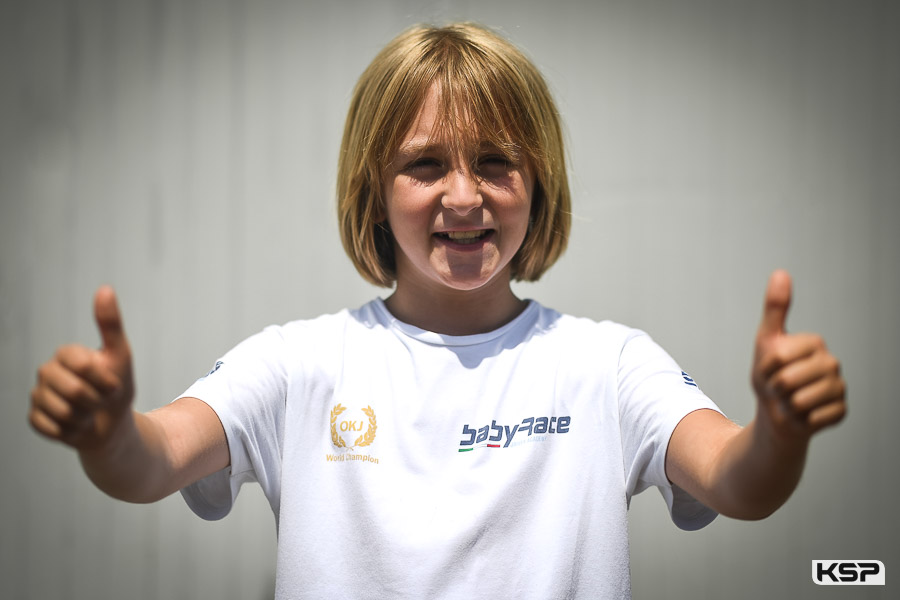 Tristan Crisani (Alonso Kart/Iame) ahead of Augustus Toniolo (KR/Iame) and Giacomo Giusto (Energy/TM) on the second lap, Vladimir Ivannikov (EKS/TM) took the lead of the first session on the third lap ahead of Samuel Cecchetto (Parolin/TM) and Dean Hoogendoorn (Alonso Kart/Iame) who set the fastest time on the fourth lap with 1’03”631. Ivannikov nevertheless finished in the lead with a final lap of 1’03”622. Crisan was 3rd. Louis Cochet (Parolin/Iame) finished 13th.

On the second lap of the second session, Nikita Botte (Tony Kart/TM) was ahead of Gianmatteo Rousseau (Alonso Kart/Iame) and Iskender Zulfikari (KR/Iame). Filippo Pancotti (Parolin/Iame), Luke Kornder (EKS/TM) and Christian Costoya (Parolin/TM) made their presence felt on the third lap and confirmed their position on the next lap. Pancotti took the provisional pole position with a time of 1’03”320, 0.219” ahead of Ainis Vibriantis (Energy/TM) who was 2nd ahead of Kornder and Costoya.

Cristian Blandino (EKS/LKE) was the fastest on the second lap of the third session ahead of Niccolo Maccagnani (Parolin/Iame) and Riven Esteves (Parolin/Iame). Martinese took 2nd place on the next lap ahead of Sala. Blandino remained the fastest with 1’03”485, followed by Martinese 13 thousandths behind and Sala in 3rd. Alessandro Truchot (Parolin/TM) finished 10th.