The German Kart Championship traveled to Ampfing on the Schweppermannring for its half-time event. An international field of participants dueled on the race track in beaming sunshine in Southern Germany. In the end, there were five different winners.

The conditions for the third racing weekend of the German Kart Championship couldn’t have been better. The sun shone from the sky on all three racing days and made the finals on Sunday especially challenging for man and machine. The focus was on winning the half-time Championship: Maxim Rehm (DKM), Jens Treur (DJKM), Jorrit Pex (DSKM) and Ben Dörr (DSKC) secured this unofficial title.

The races were balanced. There were narrow fights for positions in all classes up until the end. There were three double winners in the end: Jens Treur (DJKM), Jorrit Pex (DSKM) and Matteo Spirgel (DSKC). Only in the DKM, Maxim Rehm and Luca Griggs shared the victories. Anyone who wants to see the races again can find the full live-stream of both days on www.kart-dm.de. Additionally, lots of information can be accessed on the social media channels of the DKM.

DKM: Maxim Rehm and Luca Griggs share victories
Maxim Rehm (Rehm Racing) dominated qualifying and the heats with a strong performance. The Baden-Wuerttemberg resident therefore gained pole position for the first final race. Things weren’t easy for him then though. Kiano Blum (TB Racing Team) caught up with him towards the middle of the race and put a lot of pressure on Rehm, who kept his nerves and won narrowly in front of the Austrian. “It was a long race. I tried to stay calm and was able to win in the end. I’d really like to thank my team in the background”, the winner summed up in his interview. Juliano Holzem (Dörr Motorsport) came in third, followed by Lenny Ried (Lanari Racing Team), Kevin Lantinga (Falcon Racing Team) and reigning Champion Niels Troeger (SRP Racing Team).

Reigning vice Champion Luca Griggs (Falcon Racing Team) caused a surprise in the second final race, starting from eleventh place with four new tires. Due to an impressive pace, he raced through the field and took the lead in the middle of the race. He then achieved an advance of about six seconds until crossing the finish line and thereby celebrated his first victory of the season. “We’ve worked hard this entire weekend and now everything came together. This was a great race and I’m very happy“, the Brit summed up in his winner’s interview. Rehm still won the half-time Championship. He fought a narrow fight for second place with Blum, but in the end the German prevailed while Blum fell back behind Lantinga to fourth place during the last bend. Holzem completed the top five. 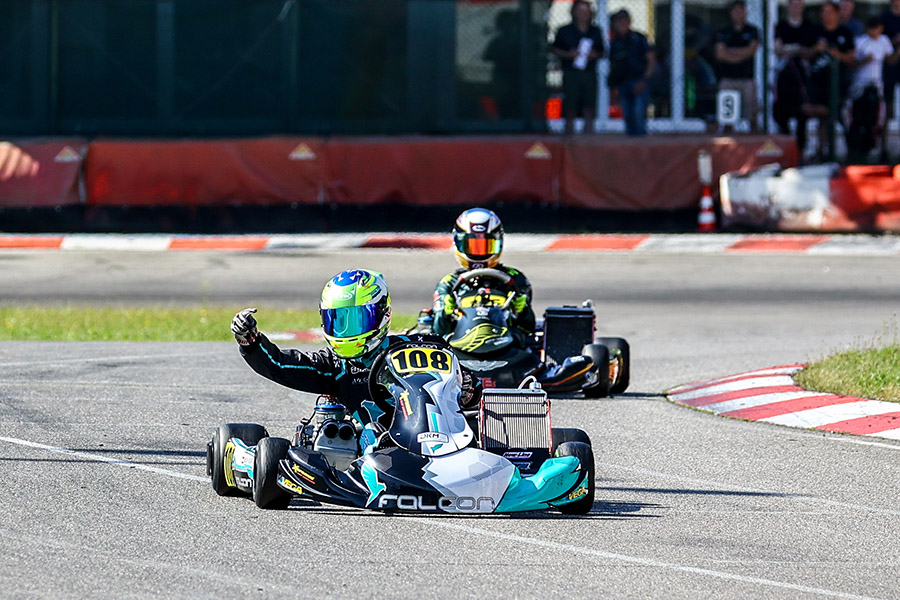 DJKM: Double victory and half-time title for Jens Treur
Dane Tobias Bille Clausen (Shamick Europe) drove the best time at qualifying of the juniors and also won one heat. Jens Treur (Falcon Racing Team) gained pole position after the heats though: With a victory and a second place he had the least penalty points in the evening and led the field into the first final race. The Dutchman also set the pace here and couldn’t even be deterred by strong Tom Kalender (TB Racing Team) towards the end. Behind the two leading drivers, there was a thrilling fight during the last few laps. At first, only Maxens Verbrugge (TB Racing Team) and Clausen fought for third place, but Simon Rechenmacher (TB Racing Team) and Portuguese Rodrigo Seabra (Lanari Racing Team) came close too. The four drivers fought until the finish line. In the end, Verbrugge came in third in front of Rechenmacher and Sabrea. The latter received a spoiler penalty though and fell back to ninth place behind Clausen. New fifth winner was Luca Schwab (TB Racing Team).

Kick-off winner Treur also couldn’t be stopped during the second race. With a confident performance, he drove towards a double victory and thereby further strengthened his Championship lead. “I had two very good races. It was important to get a good start and then keep my cool. We’re well equipped for the remaining events“, the winner rejoiced at the finish line. There was no change on second position as well: Kalender stayed in the winner’s wind shadow, but never got a chance to attack. Regarding the further positions, there was a group of six divers who fought for the remaining cup ranks. At first it looked like Schwab was going to prevail, but he lost all chances due to a technical flag. Rechenmacher took his place followed by Clausen and Verbrugge.

DKSM: Jorrit Pex celebrates impressive double victory
Overall leader Jorrit Pex (SP Motorsport) already made it clear on Saturday that he wanted to achieve his first victory of the season this weekend. He led the field at qualifying and the heats and gained the maximum amount of points. He tied in with this performance in the first final race. At first, he lost the start to Tim Troeger (SRP Racing Team), but the Dutchman drove past Troeger again soon and celebrated his first victory of the season. “This was a good race. The tires still look good too – let’s see what the second race is going to bring”, said Pex and seemed to already know what was coming. The places behind the winner were taken quickly too. Troeger led the field of pursuers in front of Guust Specken (CRG Holland), David Trefilov (SRP Racing Team) and Daniel Stell (Haak Motorsport).

The second final race was truly exciting then: Troeger won the start again and Pex countered shortly after. Until the middle of the race it looked like an easy race for the seven-time Champion. But the competition with new tires came close and tried everything to drive past him. The routine driver showed his entire skill set and defended his lead until the finish line. Valentino Fritsch (BirelART Racing KSW), Stell, Kris Haanen (SP Motorsport) and Alexander Schmitz (BirelART Racing KSW) followed in his wind shadow. The two latter drivers showed impressive catching-up races from 13th and 14th starting positions. Double winner Pex was in the best mood in the subsequent interview: “We already knew before the start that it was going to be a tough race with four old tires. I tried to drive off a bit, but my opponents were very fast. I had to keep my rhythm then to win.”

DSKC: Guest driver Matteo Spirgel wins twice
He came, saw and conquered: Guest driver Matteo Spirgel (CPB Sport) left his mark on the half-time weekend. Starting at qualifying, he was unstoppable at the front of the field and won both heats as well as both final races. He was accordingly content with his debut in the DSKC: “It was a lot of fun. The speed was great throughout the entire weekend. My team has a huge part in that, thanks for the great work.”

Claudia Henning (Kartxxl Racing Team) was another surprise of the weekend. She already drove among the front field at qualifying, did great in the heats as well and started into the first final race from second place. She defended her position due to a perfect start and celebrated her first place on the podium within the framework of the DKM. “We didn’t have the pace at the beginning of the race, but the tires kept getting better throughout the further course of the race and it’s great to stand on the podium”, rejoiced Henning, who also gained the maximum amount of points. The remaining positions were taken quickly as well: The CPB Sport-duo Tim Gerhards and Celian Gallasin fought their way past Enrico Förderer (Doerr Motorsport) and came in third and fourth. Foerderer lost more ground and also had to let his team mate Ben Doerr pass him by. Dörr achieved important points regarding the fight for the title on fifth place.

Henning took the role of pursuer in the second race as well. She got under a lot of pressure from Gerhards and Flynnt Schuring (CPB Sport) during the first half of the race. She withstood this though and celebrated another second place. The fight for the last place in the cup ranks got really narrow then: There were six drivers who showed their ambitions until the end of the race. Lukas Reiboeck (KSW BirelART Racing KSW) received the trophy in the end: The Austrian showed a great catching-up race and fought his way forward from 18th starting position into the top five.

All information regarding the racing weekend can be viewed at the DMSB-portal.

DKM: Will the first decisions be made in the Arena E?