Home News ACI Sport Karting, important meeting with the Manufacturers in view of the 2023 season A memorable event in Ugento at the second round of the Italian ACI Karting Championship

The second round of the Italian ACI Karting Championship has been a memorable event due to the amazing number of drivers for the Pista Salentina of Ugento and the South of Italy (246 of the 254 entered) and for the Italian Karting that keeps scoring great participation figures after the opening with 335 drivers in Franciacorta. 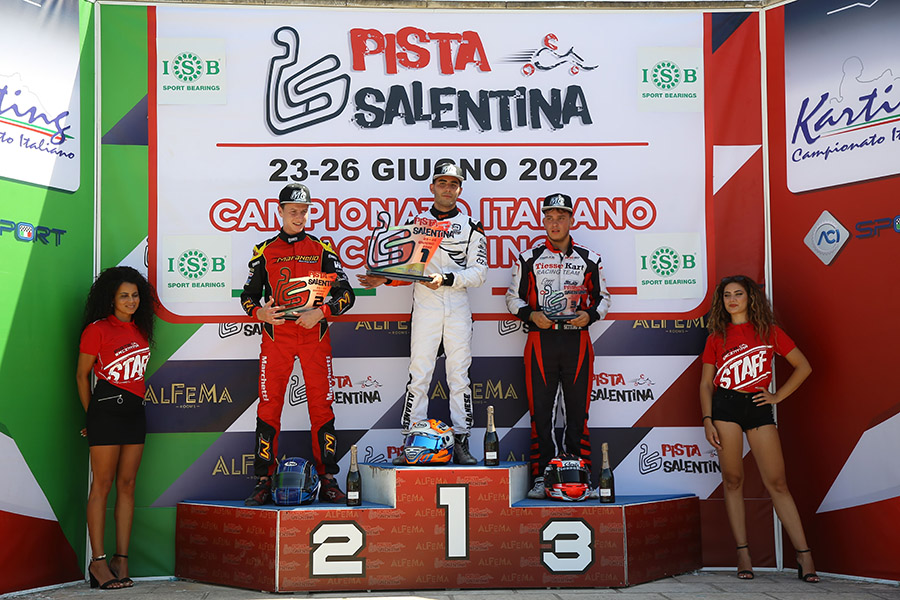 The spectacle on track has been very nice too and the protagonists of categories KZ2, MINI Gr.3, 60 Minikart, KZN Under, KZN Senior and the two categories of the Iame single-make trophy, X30 Junior and X30 Senior.

KZ2 – Maragliano wins race-1, Albanese bounces back winning race-2.
The two finals of KZ2 have been spectacular: race one was won by a great Alex Maragliano (Mangione Fina/Drago Corse-TM Racing-MG). The Under-18 driver built a good margin since the start and closed the final with two seconds of advantage on Mirko Torsellini (KR Motorsport/KR-Iame) and 2.529s on Leonardo Giuseppe Marseglia (KCS/Birel ART-TM Racing). Moritz Ebner (LG Motorsport/Birel ART-TM Racing) also Under-18, was among the fastest too and closed his race in fourth place. The hero of the day was Davide Albanese, Torsellini’s teammate who recovered 13 places in race-1 after an unlucky result in a heat on Saturday. Thanks to the race-2 grid inversion in race-2 he dominated the scene taking a great win. He completed an incredible recovery, especially considering that this was his maiden race in Ugento. In race-2, behind Albanese, Samuele Marchetti (Maranello-TM Racing) and Marco Settimo (GM Motorsport/Birel ART-TM Racing) closed in the order as the latter managed to celebrate the podium in front of his home crowd. Mauro Simoni (OK1 Racing Team/OK1-Iame) secured a good fourth place and Francesco Comanducci (KC Cesano/Tony Kart-TM Racing) a fifth. Flavio Olivieri (Mercury/IPK-TM Racing) was sixth and was the first of the Under-18 in his first year in the category. Marseglia, Maragliano and, towards the end also Torsellini had to retire from the race.

MINI Gr.3 – A great duel between Martinese and Costoya, but the classification is sub-judice.
MINI Gr.3, category that counted 63 drivers on track in Ugento, with a lot of young drivers from 20 different countries, has been very exciting. The fight for the top involved mainly Iacopo Martinese (BabyRace/Parolin-Iame-MG) and the Spaniard Christian Costoya (Parolin Motorsport/Parolin-TM Racing). The first of the two finals went Martinese’s ways but in the closing stages his overtaking move on Costoya was deemed irregular and Martinese was sanctioned losing one place. His team filed an appeal and therefore the classification is sub-judice, with Martinese leading Costoya and the teammate from Belgium Dries Van Langendonck (Parolin Motorsport/Parolin-TM Racing). Christian Costoya bounced back in the second final, winning the race. He was joined on the podium by his two teammates Dries Van Langendonck and Australia’s William Calleja, who came to the fore in qualifying practice. Vladimir Ivannikov (Gamoto/EKS-TM Racing) was fourth, Gianmatteo Rousseau (Alonso Kart by Kidix/Alonso Kart-Iame) fifth, while Martinese ended 15th.

60 Minikart – Coco and Piccolo win the two finals.
Good races were also run in 60 Minikart, the victory of race-1 went to the Under-10 driver Domenico Coco (Modena Kart/Energy-TM Racing-MG), who led Federico Pastore (Pastore/Parolin-TM Racing) and the quick Maria Chiara Nardelli (Nardelli/Parolin-TM Racing). The Spanish driver Nicola Stanley Lopez (Gamoto/EKS-TM Racing) was fourth and ended ahead of another Under-10 driver, Michele Orlando (Orlando/IPK-TM Racing). The third place among the Under-10 drivers went to Edoardo Mario Sulpizio (TK Driver/EKS-TM Racing). Race two was won by Giuseppe Piccolo (Team Driver/KR-TM Racing), who proceeded a recovering Domenico Coco and Edoardo Mario Sulpizio. The fourth place went to the Spanish driver Nicola Stanley Lopez, while the Under-10 podium was occupied by Coco, Sulpizio and Orlando.

KZN Under – Musio dominates the first final, while Piccioni takes the second one.
Luigi Musio (TK Driver Academy/TK-TM Racing-LeCont) dominated the first part of the weekend from practice to heats and then the first of the two finals securing a good win ahead of Massimiliano Casagranda (TecTav Racing/Birel ART-TM Racing) and Leonardo Pelosi, who claimed a deserved P3. Giuseppe Rendina (Bestkart-TM Racing) was among the quickest in P4 as Simone Ragno (KC Cesano/Tony kart-TM Racing) in P5. Antonio Piccioni (TK Driver Academy/TK-TM Racing) managed to recover up to P10 from the back of the grid. Antonio Piccioni managed to climb up several places in the second final and claimed the win in an exciting finale. The second place went to Denis Tuia (VZeta Racing/Birel ART-TM Racing), while Luigi Musio was third due to a penalty for the dropped front fairing. The third place went therefore to Alessandro Paiano (Paiano/Sodi-TM Racing) who has been a good interpreter of the second final and kept the lead nearly until the end. Leonardo Pelosi ended fourth, while Filippo Calligaris (ErreEsse/Parolin-TM Racing) was fifth.

KZN Senior – Surprising results: Spagni and Nalon share the success.
The races of KZN Senior were very hard-fought too and after several surprising results, the main protagonist was Riccardo Nalon (ErreEsse/Parolin-TM Racing-LeCont) despite the third place in race-1 due to the penalty for the front fairing. He claimed the victory in race-2 thanks to the penalty (dropped front fairing) handed to his rival Roberto Profico (Profico/Tony Kart-TM Racing), who crossed the finish line as the first. The victory of race-1 went to Andrea Spagni (Maranello Kart Academy/Maranello-TM Racing), while Paolo Gagliardini (Gagliardini/Birel ART-TM Racing) was second and Riccardo Nalon relegated to P3. After the fourth place in race-1, Roberto Profico crossed the finish line on top, but the penalty relegated him to P6. P1 went therefore to Riccardo Nalon, while Paolo Gagliardini was second again and Sirio Costantini (Costantini/Intrepid-TM Racing) third.

X30 Junior – Antonio Apicella dominates the scene.
Antonio Apicella (Team Driver/Kosmic-Iame-Komet) secured a double win in X30 Junior. He came to the fore at the beginning of the weekend and dominated not only the first final but also the second one despite the top 8 grid inversion. In race-1 Apicella headed Giacomo Maman (TB Kart/TB Kart-Iame) and his teammate from Austria Nando Weixelbaumer. Ermanno Quintieri (PRK/Tony Kart-Iame) was fourth, Riccardo Cirelli (Autoeuropeo/Tony Kart-Iame) fifth. Davide Bottaro (Team Driver/Tony Kart-Iame) ended second but was later on excluded due to a technical irregularity to the exhaust pipe. The second final was won by Apicella, who managed to end on top after starting in eighth place. He had a nice fight with Cirelli. Maman ended third, while Mattia Vischi fourth proceeding Tom Van Langendonck (MLG/Parolin-Iame).

X30 Senior – Carenini great protagonist, as Bagnardi completes a great race-2.
In X30 Senior the main protagonist of the event has been the Italian Danny Carenini (Team Driver/Tony Kart-Iame-Komet), who was very good in qualifying practice, won the heats and the first final. The competitiveness of Carenini continued also in race-2, where, after a bad start, he managed to recover up to a great podium. In race-1 carenini proceeded KGT’s pairing Riccardo Ianniello and Eliseo Donno, while the victory of race-2 went to Matteo Bagnardi (Bagnardi/Top Kart-Iame), who proceeded the strong rival Andrea Pirovano (Team Driver/Kosmic-Iame). Carenini’s third place arrived thanks to the penalty handed to Eliseo Donno (dropped front fairing). The fourth place went to Federico Albanese (Modena Kart/Tony Kart-Iame) and the fifth Sebastiano Pavan (Team Driver/Tony Kart-Iame), who recovered several places.

Complete results are available at http://www.acisport.it/it/CIK/home.