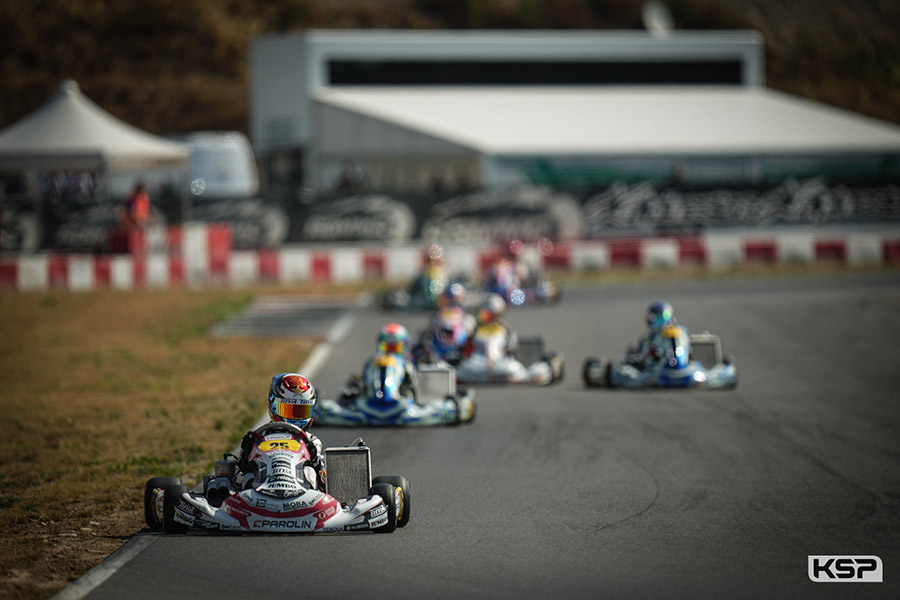 It was already 25° on Sunday morning for the Super Heats of the fourth round of the Champions of the Future Euro Series under the blue sky of Franciacorta.

SH1: Lammers
Taym Saleh (KR/Iame) got off to a great start from pole position in Super Heat 1 and immediately opened up a gap on Jan Przyrowski (Tony Kart/Vortex), followed by René Lammers (Parolin/TM), Andres Cardenas (Energy/TM), Alfie Slater (LN/Vortex) and Guy Albag (Tony Kart/Vortex) Maxens Verbrugge (KR/Iame) made up some ground around 15th place. Lammers moved up to 2nd before attacking Saleh and taking control of the race. Elliot Kaczynski (Tony Kart/Vortex) and his team mate Albag were hanging on. Slater had regained the lead of the chasing group from his team mate Gladysz, a second behind the leader. Lammers won after a 10-place climb with a 1.3″ advantage on Slater. Gladysz defended his 3rd place by more than 4”, against Saleh, Kian Fardin (Energy/TM) and Cardenas. Verbrugge secured 11th position with a gain of eight places.

SH2: Molnar
Nathan Tye (Sodi/TM) was back in 4th place while Anatholy Khavalkin (Parolin/TM) was leading followed by Martin Molnar (Energy/TM). Jimmy Helias (Tony Kart/Vortex) had moved up two places to 7th. Molnar overtook Khavalkin and immediately protected his lead, while Tye was pressing on in 3rd place. He attacked Khavalkin who dropped back to 5th, with Molnar taking advantage of the situation to take a one second lead. Jules Caranta (Energy/TM) was back in 9th place, while Andy Consani (Sodi/TM) dropped out. Khavalkin attacked Tye for 2nd place, while Kirill Dzitiev (Tony Kart/Vortex) and Thomas Strauven (LN/Vortex) were fighting for 4th position. Molnar won 7 tenths ahead of Khavalkin who remained in the lead. Tye finished 3rd ahead of Dzitiev and Strauvenn, then Zac Drummond (Parolin/TM) 6th (+8 pl), Caranta 7th (+6 pl) and Helias 8th.