Belgian Genk’s „Home of Champions” was the location of the second racing weekend of the German Kart Championship. An international field of participants made for exciting races and some changes in the Championship ranking. 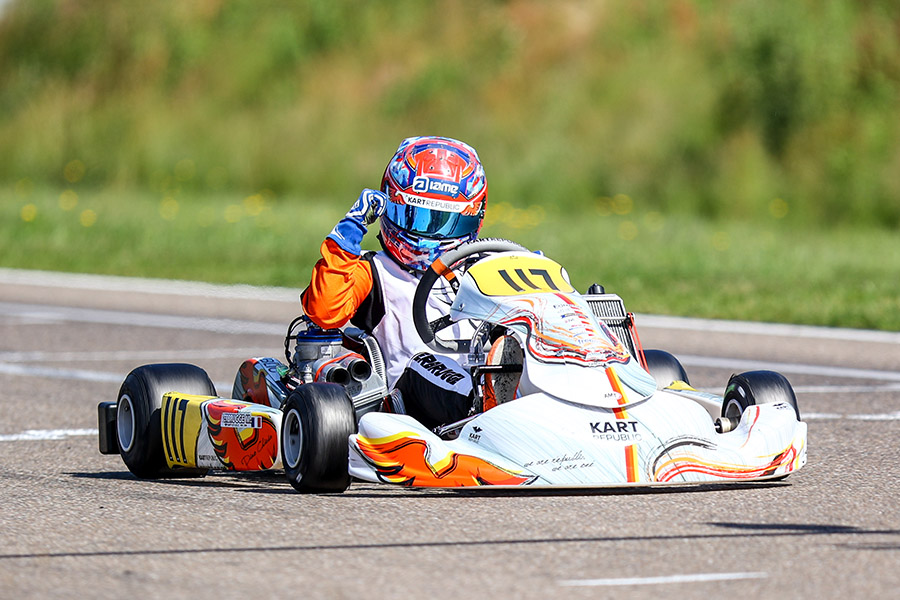 At the beginning of April, the anniversary year of the German Kart Championship started in Kerpen. Ten weeks later, the second event now took place in Belgian Genk. 112 drivers started and fought thrilling duels on the 1.360m long track. Before the season half-time, the fights for the titles in the four DMSB-grade series DKM, DJKM, DSKM and DSKC are still very exciting.

With Kevin Lantinga, Maxim Rehm (both DKM), Maxens Verbrugge (DJKM), Daniel Stell (DSKM) as well as Ben Dörr (DSKC) and Christian de Kleijn (both DSKC), there were six winners in Genk. The races were watched by a lot of fans on location and at home via live-stream. More than 16 hours of thrilling live-images were broadcast to the viewers from Genk. The events of both days can still be watched on www.kart-dm.de. 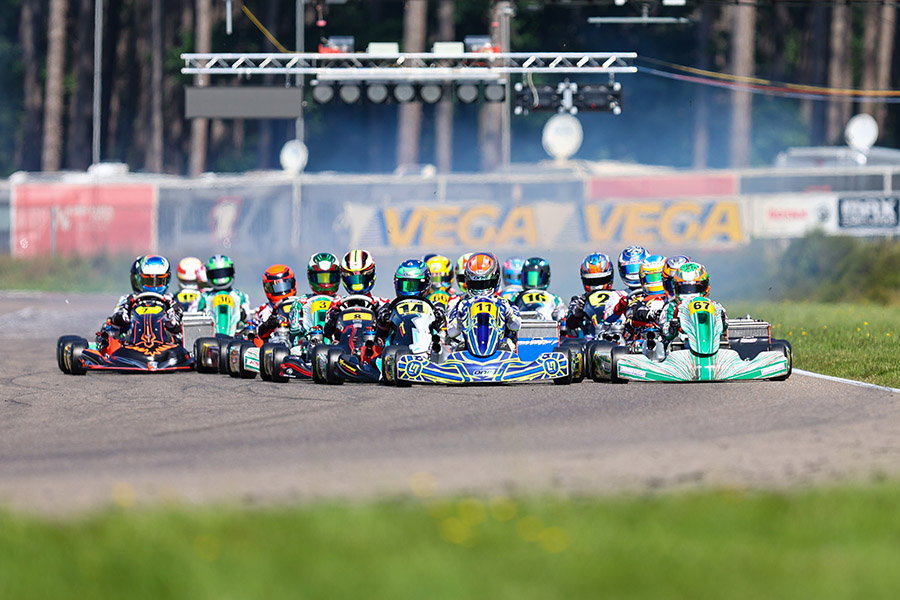 DKM: Race victories for Kevin Lantinga and Maxim Rehm
German Maxim Rehm (Rehm Racing) was unbeatable on Saturday. He drove the best time during qualifying and then won both heats competently. Starting from pole position, he had difficulties during the first final race though and only came in seventh in the end. Rookie Kevin Lantinga (Falcon Racing Team) took the lead in the meantime. During the 19 laps, the Dutchman set the pace and celebrated his first DKM-victory at the finish line: “I’m very happy about my first win in the DKM. I started with new tires and my performance was successful”, Lantinga rejoiced in his winner’s interview. Behind him followed TB Racing Team-duo Lars van Vark and Kiano Blum. Juliano Holzem (KSM Official Racing Team) came in fourth in front of reigning Champion Niels Tröger (Maranello SRP Factory Racing Team).

The field was completely rearranged during the second final race. From behind, Rehm already took the lead after three laps and achieved an advance of more than 10 seconds during the remaining laps. “We were a bit down after the first race. But we knew that we were able to win the second race with four new tires. The plan worked and I’m leading the Championship now“, the LN-Kart-driver said contently. His first pursuer was Lantinga who safely came in second. Just like Rehm, the quick Czech Tereza Bábícková (TEPZ RACING TEAM s.r.o.), Douwe Dedecker (TB Racing Team) and Lenny Ried (Lanari Racing Team) profited from new tires and ended up in the top five. 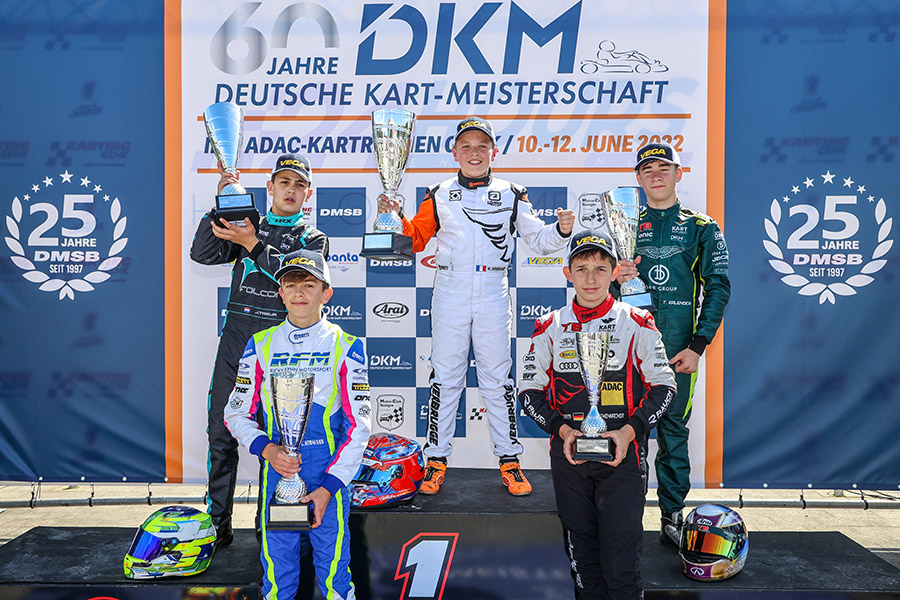 DJKM: Frenchman Maxens Verbrugge wins twice
Simon Rechenmacher (TB Racing Team) showed an impressive performance during the juniors’ qualifying. The Kart-Republic-driver secured the first DJKM-pole position of his career. During the course of the heats, he drove among the front field and was on fifth place on Saturday evening. New leader was his team mate Maxens Verbrugge. The Frenchman continued his strong performance during the final races as well. He won both races and thereby jumped to fifth place on the overall list of rankings. “This was a magical weekend. I’m very excited to be a part of the DJKM and want to thank my team and mechanics for their outstanding support”, the youngster summed up his impressions.

Behind the leading driver, there was a great fight for the remaining places during the first final race. Four drivers fought for the remaining top-five-places. At the finish line, Jens Treur (Falcon Racing Team) won in front of Tom Kalender (TB Racing Team), Thomas Strauven (Rehm Racing) and Rechenmacher. The places were final a lot earlier during the second race. Treur came in second again, his Danish team mate Tobias Bille Clausen came in third this time in front TB Racing Team-duo Kalender and Luca Schwab. 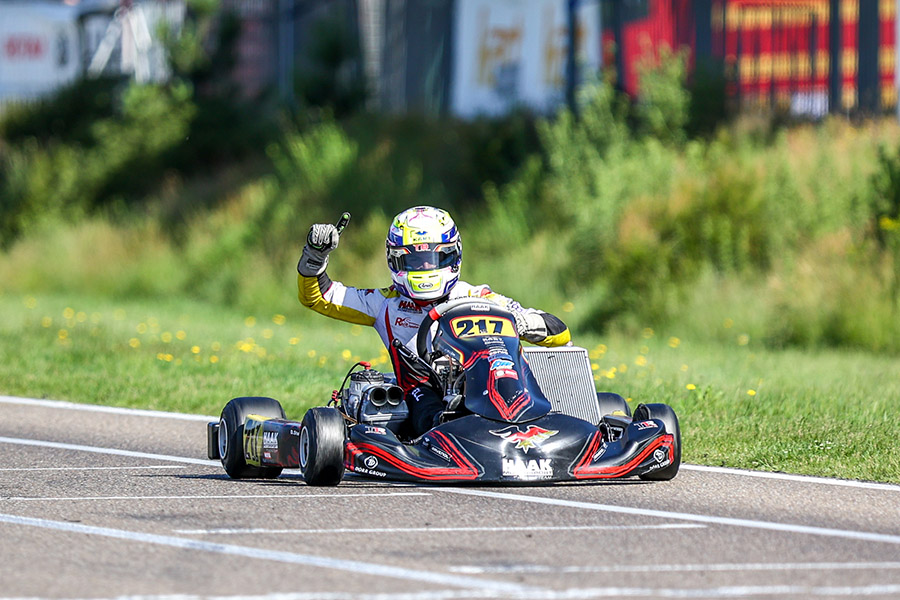 DSKM: Double victory for Daniel Stell
Routine driver Jorrit Pex (SP Motorsport) proved that he still has Champion qualities in Genk. The seven-time Champion secured the best starting position for the heats due to a clear best time at qualifying and defended it until Saturday evening too. From first starting position, Pex won the start into the first final race as well and initially drove off from the field a bit. Daniel Stell (Haak Motorsport) came up from behind though and used his chance shortly before the finish line. Due to a strong maneuver, he took the lead and won in front of Pex and Thomas Imbourg (CPB Sport) from France. The Germans Robert Kindervater (BirelART Racing. KSW) and David Trefilovs (Maranello SRP Team) completed the cup ranks.

From pole position, Stell achieved an unchallenged start-finish-victory during the second final race and was very happy about his success: “The speed was just incredible. The overall package was right and we’re in striking distance regarding the Championship.” Pex experienced a much more diverse race. After a bad start, he was only on seventh position, but was able to fight his way forward with fast lap times and was rewarded by coming in second. The fight for the remaining place on the podium was open until the end. On the last meters, Guust Specken (CRG Holland) managed a maneuver against Tim Tröger (Maranello SRP Factory Team) and came in third. The Dutchman fought his way forward from fifteenth place into the top three. Valentino Fritsch (BirelART Racing KSW) was in the wind shadow as well and came in fifth. 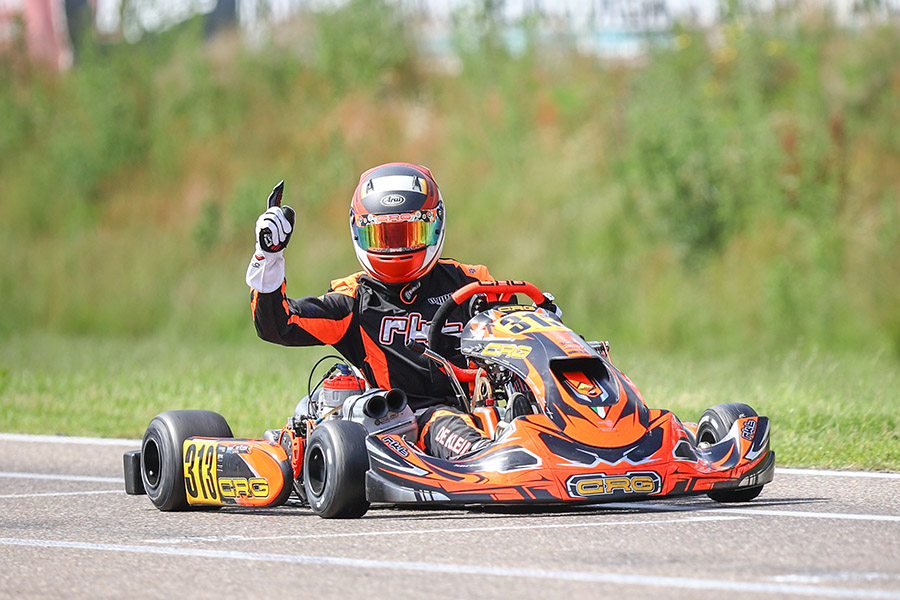 DSKC: Ben Dörr and Christiaan de Kleijn triumph in Genk
Kerpen-winner Ben Dörr (Dörr Motorsport) tied in with his success in Genk and already took the lead after qualifying. Even though he lost the starts of both heats, Dörr fought his way back to the front and thereby gained the role of favorite for the finals. He fulfilled this during the first final race too: After some tough maneuvers during the starting phase, the Hessian strengthened his lead during the course of the race and celebrated his second victory of the season at the finish line: “Even though it may have looked easy, the race was really tough. Being successful always involves a bit of luck too. I also tried to spare my tires”, the winner explained in his interview. The remaining places were dealt out quickly as well: Christian de Kleijn (CRG Holland), Quinn Winkel (SP Motorsport), Sebastian Kraft (Maranello SRP Racing Team) and Corentin Rousseau (CPB Sport) received the remaining cups.

Things seemed to be going well for Dörr during the second final too. But deteriorating tires made things exciting once again. Five laps before the end of the race, the first four drivers were really closely together and a fight for victory ensued. Christiaan de Kleijn took the lead and won in front of Lukas Reiböck (BirelART Racing KSW), Winkel, Dörr and Rousseau. After the unexpected success, the winner from the Netherlands was in a great mood afterwards: “I had already won the start, but then had to let Ben pass me by again. He had huge problems with his tires in the end though and I kept pushing. To win in my fifth shifterkart race is a great success.”

The German Kart Championship is going to continue in five weeks. Then, the highest German kart racing grade series are going to travel to Bavarian Ampfing and determine the half-time Champions.

All information regarding the racing weekend can be accessed at the DMSB-portal.

Return of training to the 2022 FIA Karting Academy Trophy

DEKM takes a break in 2022 after four successful seasons