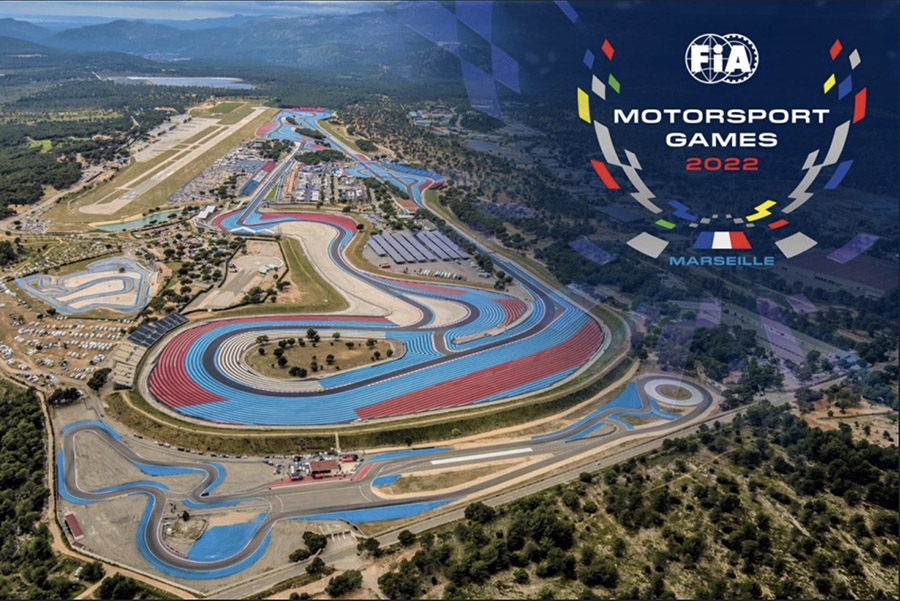 The famous Circuit Paul Ricard near Marseille, France, will play host to a wide range of motorsport disciplines for the return of the FIA Motorsport Games in October this year.

The city of Marseille will host the Opening Ceremony on Wednesday, 26 October, and a spectacular display of every ASN and its team of drivers parading under their country’s flag near Vieux-Port at the Mucem in Marseille. The surrounding regions of Saint Baume and the Autocross Veynois, meanwhile, will also serve as host venues in the following three days of competition, providing a perfect platform on which the vastly expanded 2022 Games can unfold.

But it is not just Formula 1 that has headlined major events at the venue over its 52-year history. The Paul Ricard 1000km – part of the Fanatec GT World Challenge Europe Powered by AWS – is regarded as one of the notable GT races in the world.

The same GT3 cars that will compete this weekend in the 2022 Paul Ricard 1000km from June 3-5 will be eligible to compete in the GT, GT Sprint, and Endurance disciplines at the FIA Motorsport Games. Other major events staged there in the past have included annual visits by the European Le Mans Series and TCR Europe.

The venue is known for its distinctive run-off areas known as the “blue” and “red” zones. The blue runoff surface consists of a mixture of asphalt and tungsten. The second, deeper red zone run-off area has a more abrasive surface designed to maximise tyre grip to slow cars down.

The inaugural FIA Motorsport Games was staged at the Vallelunga circuit in Italy and headquartered in Rome in 2019. The debut event featured six core disciplines and attracted 49 nations and 192 drivers.

For the 2022 edition, the FIA and SRO Motorsport Group have expanded the event threefold to cover an array of disciplines from the grassroots to the highest echelons of the sport with the aim of increasing understanding and accessibility to the sport.

“Circuit Paul Ricard is an incredible circuit and venue,” said SRO Motorsports Group Founder and CEO, Stéphane Ratel. “The 1000km race has been part of our series, most recently the Fanatec GT World Challenge Europe Powered by AWS, for nearly a decade. It will be fantastic to see everything from karting to GT Sprint and Endurance action all at the same place; it’s the ideal venue to host 12 of the 17 disciplines at this year’s FIA Motorsport Games.”

“We are thrilled to host the FIA Motorsport Games”, said Stéphane Clair, Circuit Paul Ricard CEO. “It will be interesting to watch all these competitions between worldwide countries and various motorsport categories in the same place. We look further to working with Stéphane Ratel, his team and the FIA to organise such an incredible event in the South of France.”

More than a thousand amateur and professional drivers from ASNs across the globe and all levels of motorsport will compete at the 2022 Games – highlighting the values of respect, unity, and equal opportunity.

Registration for competing nations will be open from 15 June to 25 September 2022 via the dedicated FIA registration platform. Competitors wishing to represent their county are also encouraged to contact their respective National Sporting Authorities.

The FIA announces the departure of Peter Bayer