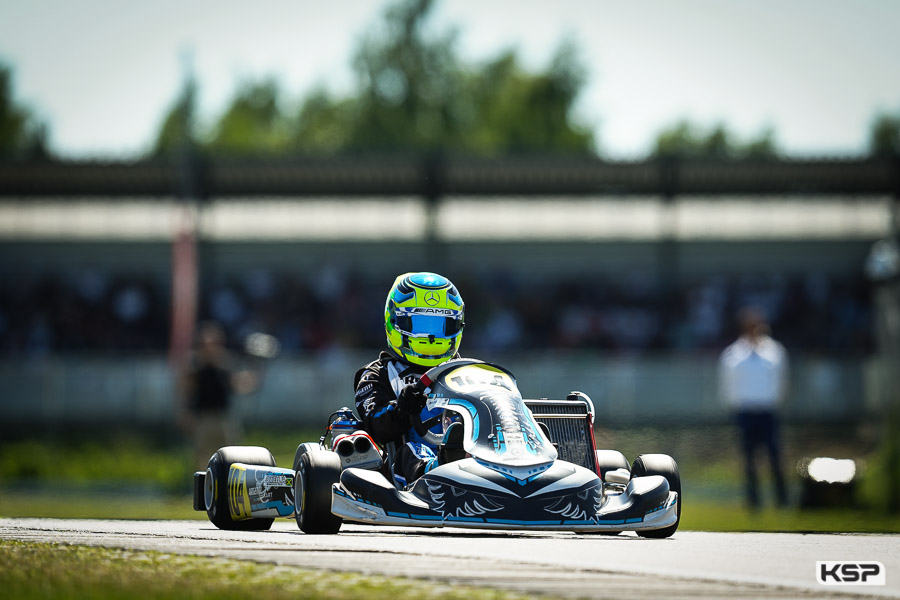 In the sun of Kristianstad, Kean Nakamura-Berta (KR/Iame), undefeated until then, settled in pole position alongside Tomass Stolcermanis (Energy/TM) on the starting grid of the OK Final of the FIA Karting European Championship round three out of four.

Nakamura-Berta went through the grass shortly after the start, but remained narrowly in the lead in the first lap, followed by Alex Powell (KR/Iame), then Maksim Orlov (Parolin/TM). Powell took the lead on the second lap, followed by Orlov. Olin Gali (CRG/Iame) was 3rd ahead of Nakamura who had not recovered his usual rhythm. He soon regained 3rd place with Stolcermanis right behind him. Tuukka Taponen (Tony Kart/Vortex) was back in 6th and Joe Turney (Tony Kart/Vortex) 7th. The battles were multiplying at all levels with their attendant retirements. Evan Giltaire (KR/Iame) was 10th, Enzo Deligny (Parolin/TM) moved up eight places to 13th, Malo Bolliet (KR/Iame) was 19th ahead of Arthur Rogeon (KR/Iame).

Powell was slightly ahead of Orlov with Nakamura and Stolcermanis in ambush. Nakamura regained 2nd place on the 10th lap, 1,4″ behind Powell and Stolcermanis followed in 3rd position. Taponen attacked Gali for 5th place in mid-race while Giltaire came back on Turney and soon took 7th. Powell continued to maintain a 1.4″ lead over Nakamura. Giltaire passed Gali for 6th position while Arvid Lindblad (KR/Iame) attacked Deligny for 11th. With five laps to go, the situation seemed stable at the front, except for Taponen who took 4th place from Orlov.

Powell raised the Jamaican colours as the winner of the OK Final for the first time after 25 exceptional laps. Nakamura-Berta crossed the line 1.1″ later, followed by Stolcermanis, then Taponen at 3.44″ and Orlov 5th. Giltaire finished 6th ahead of Turney and Lindblad. Deligny took 10 places back to 11th, Rogeon nine places to 17th and Bolliet finished 20th. Eight karts had withdrawn.