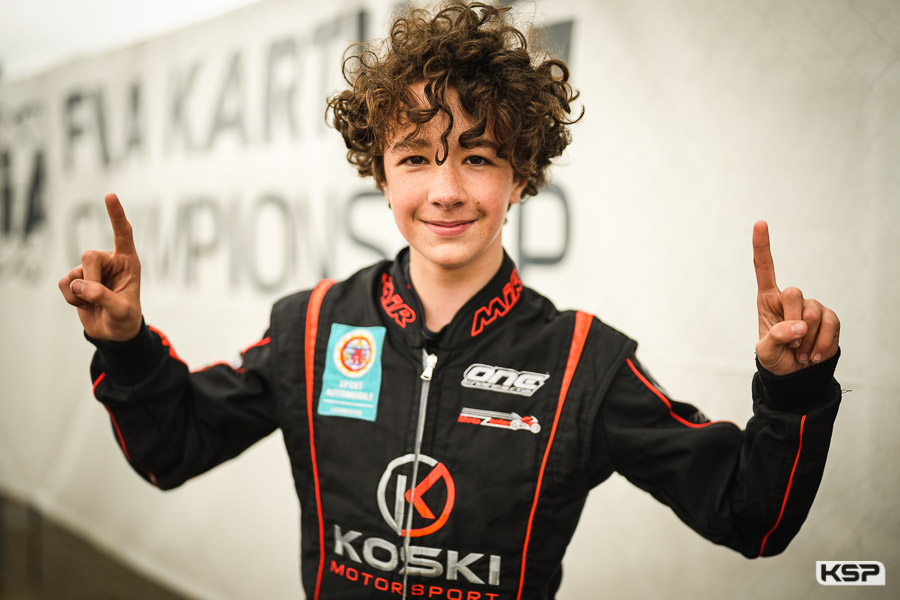 Kristianstad, Friday 3rd June, from noon. 73 OK-Junior drivers are taking part in the Qualifying Practice for the FIA Karting European Championship. It is not yet summer and the south of Sweden is sheltered from the sun by a grey haze that keeps temperatures down to around 13°. But unlike the day before, the track was dry. The Vega’s were quick to reach their maximum efficiency and did not need to leave the start park until 3’30 before the end of the sessions.

Session 1: Helias – 51”635
The first session quickly took to the track. Jimmy Helias (Tony Kart/Vortex) set a first lap of 51”735. On the second lap, he was not overtaken, but improved by a hundredth on his third lap, 57 thousandths ahead of Emanuele Olivieri (IPK/TM). Miguel Costa (KR/Iame) followed in 3rd place, 0.133″ ahead of Thomas Strauven (LN/Vortex) and Dmitry Matveev (Tony Kart/Vortex). Jules Caranta (Energy/TM) was 6th.

Session 2: Khavalkin – 51”595
The second session started a little later than the previous one. Lewis Wherrell (Exprit/TM) was the fastest on the first lap with 51’957. He improved to 51”700 on his second run, then Anatholy Khavalkin (Parolin/TM) passed with 51”595 on lap 3. He set the fastest time of the session, provisional pole, 27 thousandths ahead of Wherrell. Enzo Tarnvanichkul (Tony Kart/Vortex) was 3rd, Nikolas Roos 4th by a tenth, followed by Nathan Tye (Sodi/TM). Arthur Dorison (Tony Kart/Vortex) finished 11th and Andy Consani (Sodi/TM) 13th.

Session 3: Bouzar – 51”590
Zac Drummond (Parolin/TM) was 52”116 on the first lap, then Guillaume Bouzar (Tony Kart/Vortex) took the lead on the second lap with 51”618 ahead of Reno Francot (Birel ART/TM). The Luxembourg driver improved to 51”590 on the third lap and took pole position. Kirill Kutskov (Birel ART/TM) finished 2nd by 0.123”, followed by his team mate Francot. Maxens Verbrugge (KR/Iame) was 4th not far away, followed by Jan Przyroswski (Tony Kart/Vortex).