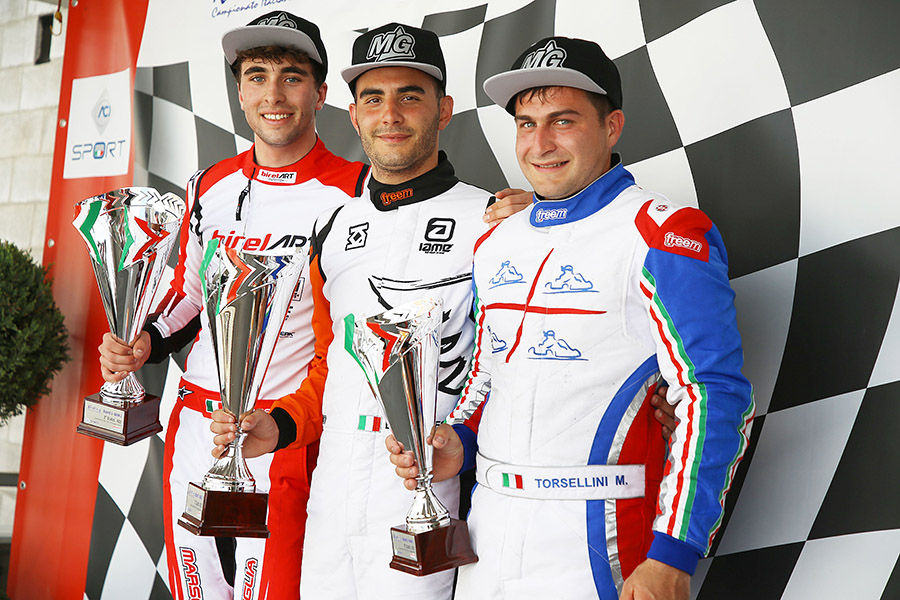 It has been an intense weekend at the Franciacorta Karting Track on the occasion of the opening meeting of the Italian ACI Karting Championship 2022. The circuit of Castrezzato (Brescia) set a participation record with 335 drivers coming from 27 different countries. The racing program has been quite busy from qualifying to the hard-fought finals that elected the protagonists of each category on Sunday, May 22.

It has also been a great debut for the Franciacorta Karting Track, which coped very well with this very crowded round of the Italian Championship and kept the rigorous timing during this long weekend. All the finals have been very nice and highlighted the speed of great protagonists.

MINI Gr.3 – Martinese and Costoya take the win.
In MINI Gr.3, which had 80 drivers at the start, Race-1 was won by Iacopo Martinese (BabyRace/Parolin-Iame-MG), who kept the lead from lights to flag. Martinese won the sprint to the line with the Spanish driver Christian Costoya (Parolin Motorsport/Parolin-TM Racing) ending second and the Dutch Dean Hoogendoorn (Alonso Kart by Kidix/Alonso Kart-Iame) third. Christian Costoya had the upper hand in Race-2 as he recovered well from the grid inversion, while Iacopo Martinese was second and Dean Hoogendoorn ended again on the podium in P3.

KZ2 – Albanese and Torsellini share the victories.
In KZ2, Danilo Albanese (KR Motorsport/KR-Iame-MG) did not have many problems winning Race-1 from Leonardo Marseglia (KCS/BirelART-TM Racing) and his teammate Mirko Torsellini. Torsellini bounced back in Race-2, winning from Moritz Ebner (LG Motorsport/BirelART/TM Racing), while Leonardo Marseglia was third. Albanese retired from the race instead. In KZ2 Under 18, the victory in both finals went to Moritz Ebner.

60 Mini – Giradello and Sulpizio win the overall classification and the Under-10.
In 60 Mini, Race-1 was won by Gioele Girardello (Mercury/IPK-TM Racing-MG), who led Pietro Lilli (LGK/BirelART/TM Racing) and Giacomo Alessandri (Alessandri/IPK-TM Racing) in the order. Edoardo Mario Sulpizio (TK Driver Academy/EKS-TM Racing) had the upper hand in Race-2, while Pietro Lilli was second again and Meschiari Davoli (MLG/Parolin-TM Racing) third. Gioele Girardello and Edoardo Mario Sulpizio also won the Under 10.

X30 Senior – Excellent one-two for Pavan.
Another one-two was scored in X30 Senior by Sebastiano Pavan (Team Driver/Tony Kart-Iame-Komet), who won both finals. Sebastiano Pavan won from teammate and reigning Italian Champion Danny Carenini, while Riccardo Colombo (Autoeuropeo/Tony Kart-Iame) was third. Pavan secured the victory of Race-2 in the closing stages when a battle started ahead of him. Cristian Comanducci (PRK/Tony Kart-Iame) was eventually handed a penalty and he was relegated from P2 to P5, while the second place was inherited by Riccardo Ianniello (KGT/Tony Kart-Iame), the third went to Danny Carenini Team Driver/Kosmic-Iame) and the fourth to Andrea Giudice (Foo Drivers/Energy-Iame).

Complete results can be found at www.acisport.it.