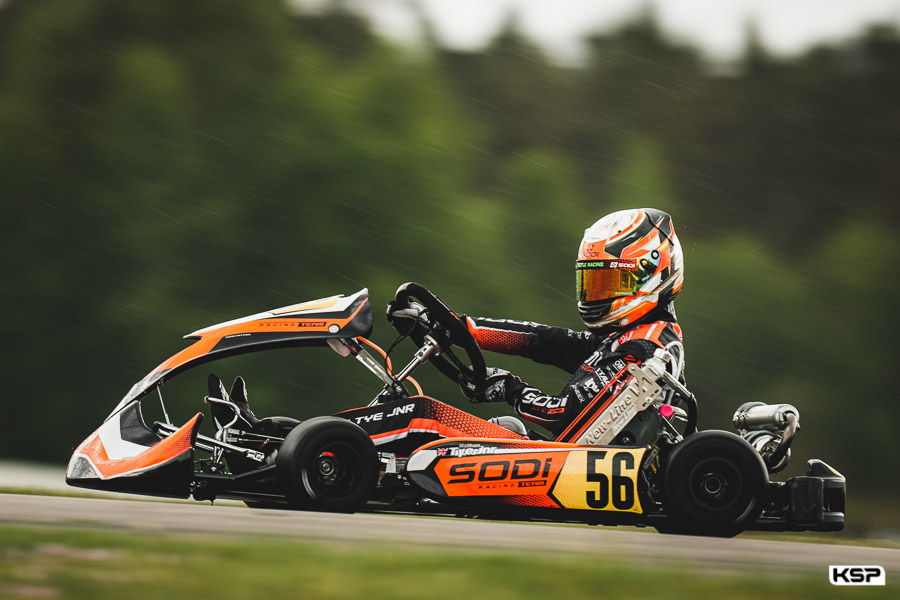 The grid had difficulty in setting up on the track and two additional formation laps were necessary. Tye started perfectly ahead of Lucas Fluxa Cross (KR/Iame). Khavalkin had to pass through the grass to keep his 3rd position. Maciej Gladysz (LN/Vortex) was back in 4th, Matveev was 5th ahead of Lammers. Fluxa took the lead, then Khavalkin led on the 3rd lap and Tye came back to 2nd. Enzo Tarnvanichkul (Tony Kart/Vortex) then moved up to 3rd. Tye took over the lead on lap 5 and Lammers dropped back to 16th on the next lap. Gladysz then moved up to 3rd and Matveev was back in the top five. Tye was 7 tenths ahead of Khavalkin on lap 8, Tarnvanichkul took 3rd place followed by Matveev who soon moved up to 3rd. Guillaume Bouzar (Tony Kart/Vortex) got back into the top five, Verbrugge stayed 8th and Jules Caranta (Energy/TM) made a nice 10 place jump to 19th.

Rain started to fall, slightly, in mid-race. The pace dropped rapidly as the rain intensified. Slips and run-offs were on the increase. Lap times had dropped from 52″ to 1’15”. Tye was doing his job in the lead, far ahead of the ever-changing pack. On the 16th lap, Fluxa was close behind in 2nd position ahead of Verbrugge, Bouzar and Khavalkin in 5th. A red flag stopped the race. Caranta had managed to get into the top 10 (+19 pl), Jimmy Helias (Tony Kart/Vortex) was 12th (+18 pl).