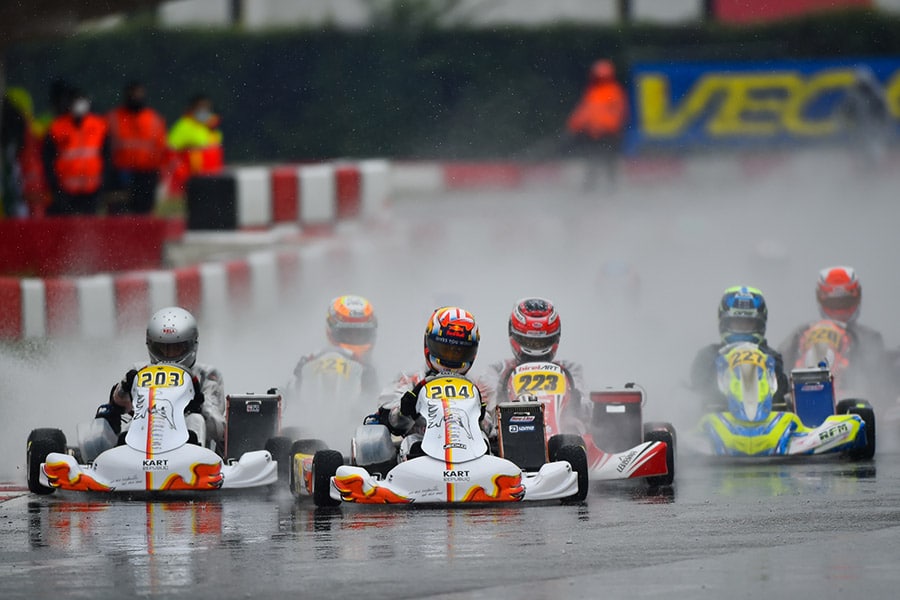 A thrilling finale took place at the South Garda Karting circuit of Lonato in occasion of the opener of the WSK Euro Series. The rain fell since this morning and made things trickier for the finalists of this important international karting event as 253 karting drivers gathered from 46 different countries.

After qualifying practice and the 42 heats run in ideal conditions, the rain fell during the final stages on Sunday and definitely highlighted the driving skills of a lot of the protagonists, but it also brought a few surprises.

The verdict of Prefinals.
The victory in the first of the two OK Prefinals went to the British driver Arvid Lindblad (KR Motorsport/KR-Iame), who was already on pole after qualifying and on top after the heats. Prefinal-B was deservedly won by the Italian Luigi Coluccio (Kosmic Racing/Kosmic-Vortex), who dominated the race after the second place in the heats.
In MINI the Pole Jan Przyrowsky (AV Racing/Parolin-TM Racing) surprisingly won Prefinal-A after an 11 place comeback. Another surprise came in Prefinal-B when the Thai Enzo Tarnvanichkul (Team Driver/KR-Iame) secured the win. The Asian Tiziano Monza (Sauber/KR-Iame) was among the excellent names out of the final instead.
Riccardo Longhi (BirelART Racing/BirelART-TM Racing) came to the fore in KZ2 winning Prefinal-A, while his teammate from Holland Marijn Kremers did the same in Prefinal-B building a lead of more than 13s on his closest rival.
In OKJ, Prefinal-A, was dominated by the aggressive driving of the British driver Harley Keeble (Tony Kart Racing Team/Tony Kart-Vortex). In Prefinal-B the driver from United Arab Emirates Rashid Al Dhaheri (Parolin Motorsport/Parolin-TM Racing) climbed all the way up from P8 to the win.

The Finals.
Lindblad confirms his lead of OK.
In OK the initial duel between the American Ugo Ugochukwu (KR Motorsport/KR-Iame) and the British Arvid Lindblad (KR Motorsport/KR-Iame) has been quite exciting, but after the initial fights Lindblad took the lead and kept it all the way to the flag. Ugochukwu settled for P2, while the Italian Luigi Coluccio (Kosmic Racing/Kosmic-Vortex) ended third leading the Brazilian Rafael Camara (KR Motorsport/KR-Iame). A 5s time penalty at the end of the race due to the misplaced front fairing stripped Coluccio from the podium. Camara was also penalized and the third place was therefore inherited by Brando Badoer (KR Motorsport/KR-Iame) who has always been among the front runners.
OK Final: 1. Lindblad; 2. Ugochukwu; 3. Badoer; 4. Coluccio; 5. Taponen; 6. Camara; 7. Bertuca; 8. Andreasson; 9. Kucharczyk; 10. Tsolov.

Great recovery and win for Pesl in MINI.
In MINI the Thai Enzo Tarnvanichkul (Team Driver/KR-Iame) led the race early on, but soon the lead was taken by the Czech Jindrich Pesl (Baby Race/Parolin-Iame), who had already claimed the pole position but slipped down the field in the heats. The duel among the two continued all the way to the flag, but Pesl crossed the finish line on top and was followed by Tarnvanichkul and the Italian Emanuele Olivieri (Formula K Serafini/IPK-TM Racing), who claimed a deserved P3. The Belgian Dries Van Langendonck (BirelART Racing/BirelART-TM Racing) secured a great P4 instead. The Dutch René Lammers (Baby Race/Parolin-Iame) recovered a stunning 22 places and ended fifth.
MINI Final: 1. Pesl; 2. Tarnvanichkul; 3. Olivieri; 4. Van Langendonck; 5. Lammers; 6. Josseron; 7. Sala; 8. Costoya; 9. Bogunovic; 10. Chi.

Kremers dominates a tight KZ2 final.
KZ2 lived on an infinite series of duels, but the Dutch Marijn Kremers (BirelART Racing/BirelART-TM Racing) pulled away in the Final. Behind him, a close battle was fought by his teammate Riccardo Longhi and the French Adrien Renaudin (Sodikart/Sodi-TM Racing). The two eventually were handed a penalty: 5s due to the misplaced front fairing for Longhi and 10s to Renaudin for unfair behaviour. The second place went therefore to the French Jeremy Iglesias (CRG Racing Team/CRG-TM Racing) and the third to an excellent Pedro Hiltbrand (Tony Kart Racing Team/Tony Kart-Vortex), who completed an amazing 23 places recovery.
KZ2 Final: 1. Kremers; 2. Iglesias; 3. Hiltbrand; 4. Lundberg; 5. Federer; 6. Renaudin; 7. Longhi; 8. Fusco; 9. Schmitz; 10. Van Hoepen.

Give your team style with MIR customisable clothing