Heats on Saturday ended qualifying ahead of the final stages of the first round of WSK Euro Series at the South Garda Karting. The opener of this important international series had 253 drivers on track from 46 countries. In total, 42 heats have been needed to narrow down the list of the finalists that will chase the victory of KZ2, OK, OKJ and MINI on Sunday, April 11th. The Live Streaming will begin at 10:40 with Prefinals and will continue at 14:20 with the Finals. 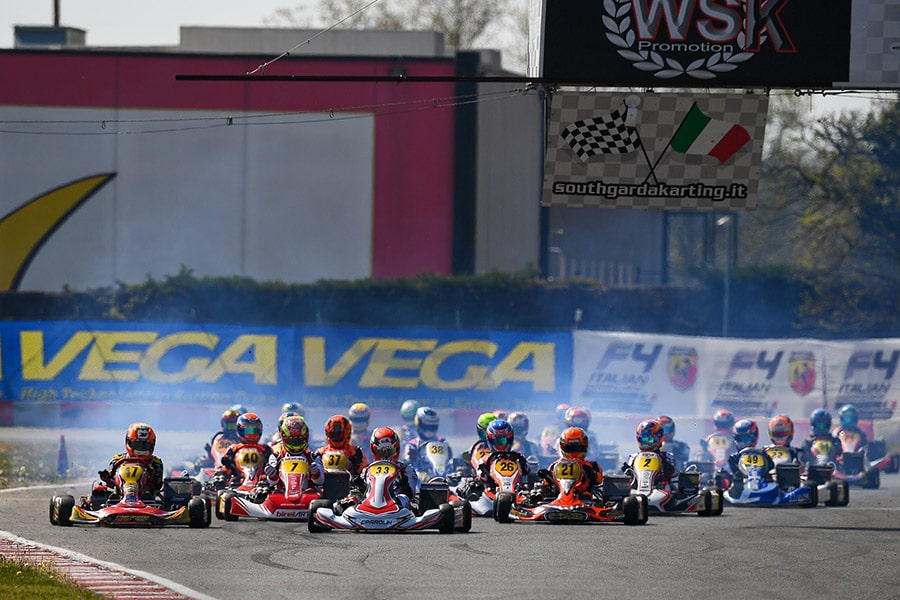 Lindblad on top in OK.
The duel in OK has been very intense and the British driver Arvid Lindblad (KR Motorsport/KR-Iame) displayed a great shape, but was challenged by several rivals. After posting the pole position time in qualifying, Lindblad won two heats and came third in the last, which earned him the provisional first position. The Italian Luigi Coluccio (Kosmic Racing/Kosmic-Vortex) follows him thanks to the win in the closing heat. The American Ugo Ugochukwu (KR Motorsport/KR-Iame), the Brit Joseph Turney (Tony Kart Racing Team/Tony Kart-Vortex) and the Italian Brando Badoer (KR Motorsport/KR-Iame) secured one win, but the latter slipped down to P8 due to a DNF. He was proceeded in fact by the Italian Valerio Rinicella (Parolin Motorsport/Parolin-TM Racing), the Swede Norton Andreasson (Ward Racing/Tony Kart-Vortex) and the Spaniard Bruno Del Pino Ventos (Tony Kart Racing Team/Tony Kart-Vortex). A lot of other drivers are ready to bounce back, as the Brazilian Rafael Camara (KR Motorsport/KR-Iame) who accused some delay in one heat.
OK classification after the heats: 1. Lindblad; 2. Coluccio; 3. Ugochukwu; 4. Turney; 5. Rinicella; 6. Andreasson; 7. Del Pino; 8. Badoer.

Deligny on top in OK-Junior.
A total of 15 heats were run in OK-Junior. The French Enzo Deligny (Parolin Motorsport/Parolin-TM Racing) is currently topping the charts thanks to two wins and some good placings. He is followed by the Brit William Macintyre (BirelART Racing/BirelART-TM Racing), who also claimed two wins, and the Brazilian Matheus Ferreira (KR Motorsport/KR-Iame), who secured three wins. Several other drivers can slide in on the top of the classification though, like the Russian Kirill Kutskov (KR Motorsport/KR-Iame), the Brit Harley Keeble (Tony Kart Racing Team/Tony kart-Vortex), the Belgian Douwe Dedecker (KR Motorsport/KR-Iame), and the Brit Freddie Slater (Ricky Flynn/Kosmic-Vortex). Ferreira’s teammate Coskun Irfan was also among the front runners and claimed two wins. The Japanese Kean Nakamura-Berta (Forza Racing/Exprit-TM Racing) and United Arab Emirates’ Rashid Al Dhaeri (Parolin Motorsport/Parolin-TM Racing) were also quick, but the last suffered a DNF.
OKJ classification after the heats: 1. Deligny; 2. Macintyre; 3. Ferreira; 4. Kutskov; 5. Keeble; 6. Dedecker; 7. Slater; 8. Irfan.

A lot of uncertainty in MINI!
The uncertainty in MINI is witnessed by the number of winners of the 15 heats. Battles lasted until the closing meters and 10 different drivers crossed the finish line on top. Among these, the Austrian Niklas Schaufler (Emme Racing/EKS-TM Racing) claimed three wins, while the Italian Emanuele Olivieri (Formula K Serafini/IPK-TM Racing), the Asian Tiziano Monza (Sauber/KR-Iame) and the Pole Jan Przyrowsky (AV Racing/Parolin-TM Racing) won two heats.
MINI classification after the heats: 1. Schaufler; 2. Olivieri; 3. Costoya; 4. Peebles; 5. Van Langendonck; 6. Tarnvanichkul; 7. Orjuela; 8. Monza.

TV Live Streaming. The double Prefinals on Sunday, April 11th from 10:40 and the Finals of categories OK, MINI, KZ2 and OKJ from 14:20 will enjoy the live TV coverage through the streaming feed available at www.wskarting.it.