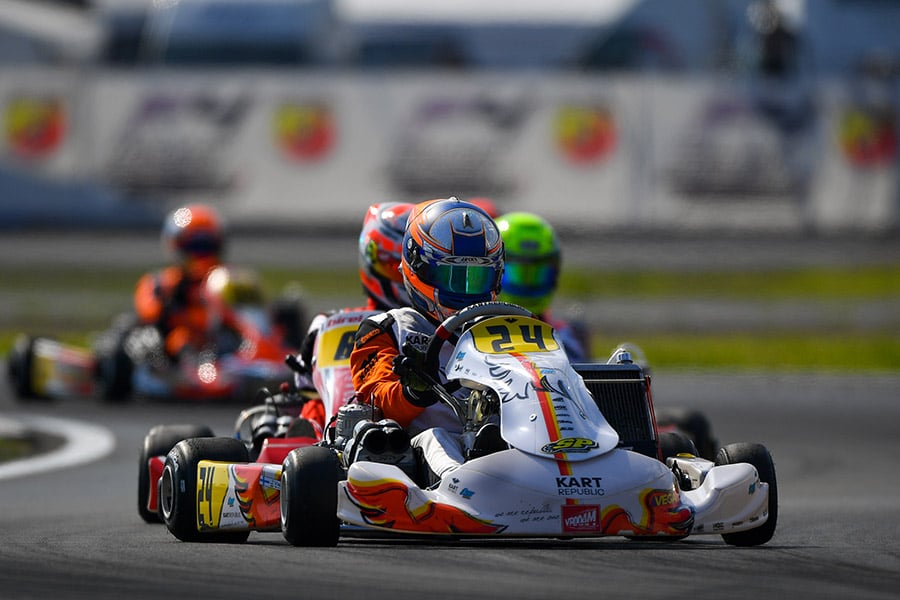 The spectacular event of the third round of the WSK Super Master Series has kicked-off at the renewed, 1.550 meters long, International Circuit Napoli in Sarno (Salerno, ITA). The presence is increased again and there is a good participation in all the four entitled categories of this important International series that sees all the main constructors and teams on track. In Sarno the event will be run behind closed doors, but fans could follow the racing action as usual through the live streaming feed at www.wskarting.it.

Qualifying practice named the protagonists on the renewed track.
This round is quite interesting as the layout of the circuit of Sarno has been completely changed compared to its previous conformation and it has been to be rediscovered in all the driven parts. The pole sitters seem to have already built enough confidence with the new track. These are the Finn Juho Valtanen (KR Motorsport/KR-TM Racing), who was the quickest of KZ2 in 53.015s, the British driver Arvid Lindblad (KR Motorsport/KR-Iame) that led the pack in OK with his best loop completed after 53.190s, the Asian Dion Gowda (Ricky Flynn/Kosmic-Vortex) that led OKJ in 55.109s and the French Jimmy Helias (Tony Kart Racing Team/Tony Kart-Vortex) had the upper hand in MINI in 1:02.452s. The result of Helias is sub-judice though, as his team appealed the disqualification issued to Helias after the practice.

The initial heats on Friday.
The initial qualifying heats took place on Friday and will continue on Saturday as a total of 42 races have to be run to narrow down the list of finalists that will compete on Sunday, March 28th.

The two provisional leaders of OKJ are equal on top after the first 6 heats: the Belgian Douwe Dedecker (KR Motosport/KR-Iame) and his Asian teammate Akshay Bohra (KR Motosport/KR-Iame) both won two heats. The other heats went to the French Enzo Deligny (Parolin Motorsport/Parolin-TM Racing) and the Russian Kostantin Krapin (Ward Racing/Tony Kart-Vortex). The classification leader from Jamaica Alex Powell (KR Motorsport/KR-Iame) was also among the quickest.