The second intense racing day has ended at the World Circuit La Conca (Muro Leccese, ITA) and it was useful to define the starting grids of the final stages of the second round of the WSK Super Master Series. A good spring-like sun blessed the 30 heats that have been run in the three categories MINI, OKJ and OK. These defined the names of the finalists that qualified for the final stages on Sunday, March 14th, among the 170 entered drivers coming from 44 countries. 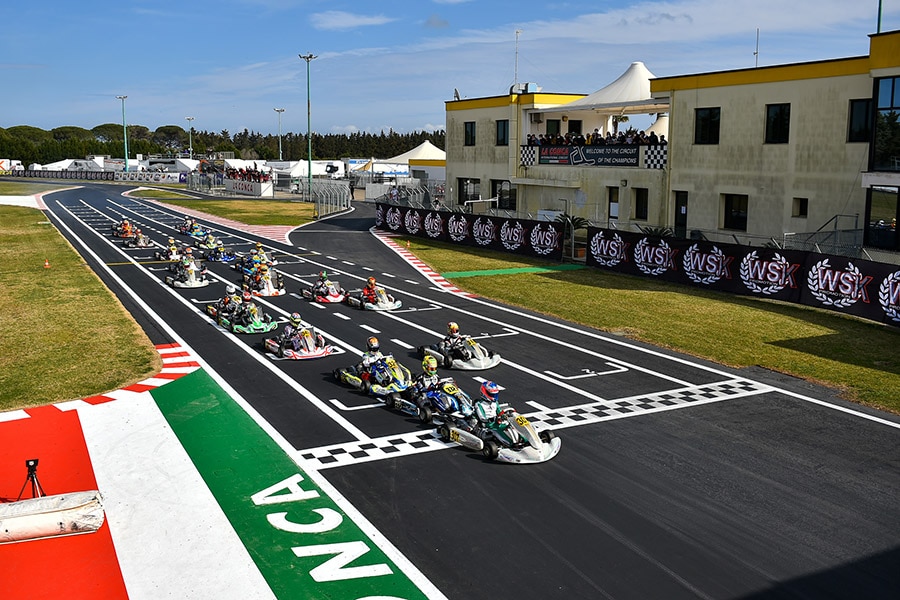 After the season opener in Adria held last February 28th, some new names came to the fore in La Conca. The provisional lead of the MINI classification is held by the Dutch driver René Lammers (Baby Race/Parolin-Iame), that of OKJ by United Arab Emirates’ Rashid Al Dhaheri (Parolin Motorsport/Parolin-TM Racing), while the Brazilian Rafael Camara (KR Motorsport/KR-Iame) is currently leading OK.

OK quite open, as Severiukhin shines.
In OK a lot of drivers can aim to the top. The British poleman Arvid Lindblad (KR Motorsport/KR-Iame) got off to a great start and won two heats, but then he lost several places in the second half of the day. Eventually, the Russian Artem Severiukhin (Ward Racing/Tony Kart-Vortex) had the upper hand winning two heats and scoring the best placings. He is followed by the Finn Tuukka Taponen (Tony Kart Racing Team/Tony Kart-Vortex) who showed his speed in qualifying practice and then won one heat, and by Andrea Kimi Antonelli (KR Motorsport/KR-Iame) who claimed another win. The Bulgarian Nikola Tsolov (DPK/KR-Iame) is fourth in the provisional classification thanks to two wins in the heats, Brando Badoer (KR Motorsport/KR-Iame) recovered up to P5 instead. The provisional championship leader from Brazil Rafael Camara (KR Motorsport/KR-Iame) was only seventh and led the Swede Norton Andreasson (Ward Racing/Tony Kart-Vortex).
OK classification after heats: 1. Severiukhin; 2. Taponen; 3. Antonelli; 4. Tsolov; 5. Badoer; 6. Lindblad; 7. Camara; 8. Andreasson.

Bohra puts his mark on OKJ.
OK-Junior launched Singapore’s driver Akshay Bohra (KR Motorsport/KR-Iame) to the top. He posted the pole position time and then won all the heats he took part in, claiming four strong victories. Behind Bohra, the Russian Alexander Gubenko (Tony Kart Racing Team/Tony Kart-Vortex) has also been quick in qualifying practice leading Series-2 and then won three heats. One win each in the heats was scored by the American James Egozi (Tony Kart Racing Team/Tony Kart-Vortex) and the Jamaican Alex Powell (KR Motorsport/KR-Iame). Classification leader Rashid Al Dhaheri (Parolin Motorsport/Parolin-TM Racing) is lagging a bit behind and is currently seventh after the heats.
OKJ classification after heats: 1. Bohra; 2. Gubenko; 3. Egozi; 4. Powell; 5. Rehm; 6. Ferreira; 7. Al Dhaheri; 8. Eyckmans.

MINI surprised by the Colombian Orjuela.
The races of MINI have been exciting as usual. The Colombian Matias Orjuela (Parolin Motorsport/Parolin-TM Racing) has been the main protagonist of the first half of the weekend. He claimed three wins and secured the first place after the heats, but a lot of drivers are ready to slide in on top. Among the fastest drivers, the Belgian Dries Van Langendonck (BirelART Racing/BirelART-TM Racing), the Italian Jacopo Martinese (CMT/Parolin-TM Racing), the Russians Vladimir Ivannikov (Drago Corse/Parolin-TM Racing) and Gerasim Skulanov (CRG Racing Team/CRG-TM Racing) and the winner of the closing heat of the day from Poland Jan Przyrowsky (AV Racing/Parolin-TM Racing). The Pole took the win at the end of an incredible sprint to the line that involved 7 drivers. At the moment, the provisional classification leader René Lammers (Baby Race/Parolin-Iame) is a bit delayed instead.
MINI classification after heats: 1. Orjuela; 2. Van Langendonck; 3. Martinese; 4. Ivannikov; 5. Skulanov; 6. Aksoy; 7. Helias; 8. Lammers.